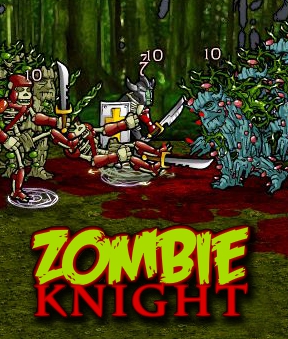 When a mighty warrior is turned into a zombie, he does what any self-respecting one-man army would do: find a good armorer, learn a few skills and go pound revenge into whoever needs it in the action brawler/arena combat game Zombie Knight from Evil Space Chicken.

In Zombie Knight you face off waves of enemies that come at you from both sides of a battlefield, if by 'battlefield' we presume a flat horizontal area that scrolls around half a screen to either side. It's a 2.5D plane, just like a brawler game (Double Dragon), so you can move up and down to flank enemies. Moving is done with the [arrow] keys (double-tap to dash) while [A],[S] and [D] let you block, strike and use your skills. Skills are bought with gold and can be as mundane as a dash attack to spawning your own monsters or bringing down lightning bolts.

It's a straight-forward brawler; block and punch you wave through the bad guys, using your skills as special attacks. Each such attack drains your blue energy bar, which you replenish with vials dropped by fallen enemies (it also slowly recovers). Ditto for health boosts and gold. But Zombie Knight is not focused on making you a fast-fingered brawler. The combat is very rudimentary, so there is little edge in simply becoming a master of it. Instead, stacks of equipment stack things in your favor (say that fast three times, while bashing orcs). A helm might give more health or energy, boots could improve your critical strike rate, shields might improve block or add to your armor count. But it's not entirely explicit to the item type. A shield does not always bring armor or defence improvements with it, but might instead make you better in attacks or ensure you have plenty of energy to go around. 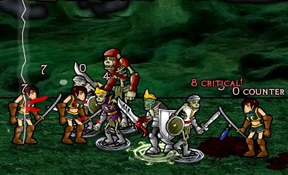 This the game embraces fully: stats are easy to compare and the new gear reflects visually on your character. Once you defeat a level, you gain some bonus armor and unlock that region's shop, always worth perusing to make sure you maintain the cutting edge of what the magic-medieval-military-industrial complex has to offer. At times your character will seem invincible (especially once the monster spawn skills are used), but your undead knight will soon have a tough fight as the difficulty scales up in appropriately brutal fashion. Older levels can be replayed, but this will only gain gold, and you'll have plenty of that in no time anyway.

The art is crisp and characters are nicely animated. Gamers looking for a more robust combat system will be disappointed; Zombie Knight conforms to the bare essentials of a side-scrolling brawler. Much like an iron-age Batman, our knight believes that you get further focusing on equipment than strangely metaphysical stuff like assigning points or learning the correct combo. This does make the game tough near the end, but it boils down to a balancing act between keeping your small army going and outwitting the flanking enemies. Not that you have to spawn monsters; going solo is as simple as choosing the appropriate skills.

Ultimately the story mode just serves to arm you for the Survival mode's never-ending waves of enemies, all notches on a Mochi high scores board. But even if you just want to spend a few hours where you can indulge in mindless violence, but pretend you are delving in stats formulas and real-time strategy, join the ranks of the Zombie Knight.

I was really enjoying this game until I encountered a strange bug. I accidentally hit the capslock key and my character ran uncontrollably into the left side of the screen until he died. I tried a different level, but he immediately dashed to the left again. Anyone know how to fix this? :(

With this setup, depending on the map, I'll either spam Liches or use Lightning Storm to destroy health bars

Holy hell, those blue trees in the corrupted forest cut through my summoned horde like a hot knife through butter. How sad.

Even after clearing all areas I couldn't get the 'Game Complete' award. How could I get it? Anybody got it already?

Yeah, the corrupted forest stopped my army cold, too. That was the first place I stopped plowing through new zones and had to grind a little cash for something to deal with it:

The opposite strategy, a decent armor and strength outfit combined with a little vampirism did the trick.

The rest of the campaign was a breeze.

I used the same strategy as Zombie Commander and found the game to be a breeze, until the last few levels. But then I found that you can

use the same strategy, and just be more efficient at helping kill enemies yourself - simultaneously stopping them from cutting through your liches "like a hot knife through butter". Then, if all fails, you may still be able to win by making the enemies follow you in a big circle and casting lightning bolts at them when your mana recharges.

It was fun for a while, but I felt it needed a little more immersion. A proper ending would have been nice too.

By the time you hit the corrupted forest, you should have quite a bit of gold to spend. I picked up stomp freeze specifically for that stage, which allowed me to do some hit-and-runs on the mother trees.

Hi Ann! So... how did you (or anybody else, please) win that award?

By the way, how many points did you all earn in Ssurvival Mode?

nice guide like it better than the other one on http://furg.net/category/zombie-games/