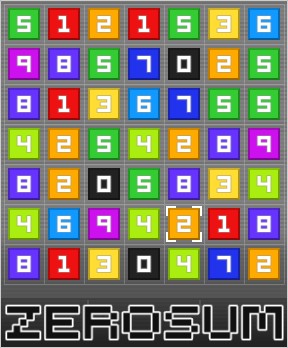 Zerosum is an intense variation on match-3 puzzles. Easy to learn, hard to master. Some day far in the future, math will be taught entirely through computer games, and something a lot like Zerosum will be the professor. It will be a caring but cruel mentor, who passes out high-energy protein snacks for correct answers, and when you get them wrong, tasers you. That's quality learnin'. Since I'm not in school any more, it's too bad we're not there yet.

You play Zerosum on a grid of blocks with numbers on them. Your goal is to make matches, by lining up at least three of the same number in either a row or column. Everything is done with the mouse. Select one of the numbers on the grid, and move it into an adjacent number. The two digits will add together. If the sum is greater than 9, the tens digit will be dropped, so 7 + 8 results in 5, for example. A block with a zero is a powerful wildcard—it matches with anything.

On the right is a list of the upcoming digits, which appear in the vacant space whenever you make a move. When you run out of these, your game is over. To prevent this you have to keep making matches, reducing the Extend meter on the left. Each time that meter reaches zero, your stock of digits increases. As you advance in levels, the Extend meter grows, making it harder and harder to stay in the game.

Making matches also gradually fills the Burst meter at the top, which sets off a kind of bonus round. During Burst Mode, matches can form with any combination of connected blocks, not just ones in a straight line. This is your chance to rack up a few extra blocks for your stock, if you can form a few large chains.

If you survive long enough, you may encounter some special blocks. Metal blocks keep the same digit no matter what, ice blocks must be thawed out by making a nearby match, and blocks with a circle of surrounding arrows will increment every turn.

Analysis: Let me address the timer issue, because I know that time limits are a real bummer for many of you. Yes, there is a strict time limit on each move, and logically, that will prevent you from playing the ideal strategy, thus stressing you out. In the timer's defense, you can't deny that it gets the blood pumping, and it also ensures that the game will end reasonably quickly. Without it, you could spend the rest of your life hunting for the best move every turn, and frankly, you've got other stuff you should be doing.

Zerosum is a great example of how to train a human brain to work in new ways. Initially, there seem to be limitless choices for every move, but you will begin to recognize patterns and opportunities. Out of necessity, you'll develop more and more sophisticated strategies; setting up future combos, sprinkling the board with zeros, planning three moves in advance. It's brain candy, once you get into it. Like defusing a bomb constructed by a six-year-old arch-villain.

This also demonstrates how Match-3 games like Bejeweled and Tetris Attack aren't a design dead end. They can be transformed from a casual and relaxing past-time to an intense and intellectual past-time, just by adding some adding. If you like this, you might also enjoy Chain Factor.

Fun game, hard though. I have to do maths and this makes my brain unhappy. But once you get the knack of the thing it's nicely addictive.

I LOVE THIS GAME

It came out quite a while ago on some japanese website, but it was taken down about 2 months ago and I couldn't find it, glad to see it's still around

It's both maddeningly difficult at times, and at others, you can just sit back and let it play itself

I think I was sold in this last game I just played. I was down to my last piece, hit it just as burn time kicked in and this massive combo just kept going throughout the entire burn time. I went from no pieces in reserve to like seven.

Yeah, this one is a little bit of a hard sell, because of the scary, scary math. But it's designed just about as well as anything I've ever played. Any game that I want to play again right away after reviewing it has got some serious talons.

I never even stopped to think about it, but you really do have a point. We, or at least I, play the games I review so much prior to that by the time the review is written rarely do I feel a need to go back to it.

I gave it a 3/5 because it's an interesting concept (and I did spend quite a bit of time on it) but it also seems too dependent on chance (standard complaint about match-3 type games, of course) and the implementation seems a bit buggy to me, I've had several instances where I lost mouse control in the game (alt-tabbing in and out usually fixes that) and at least two crashes when in the middle of big combos.

This would be perfect if we could predict what is going to fill in the places of a match. As it is, however, the randomness of that makes it impossible to plan a chain and therefore makes it a little frustrating since you'll have no control over it. I also think the time limit is a bit unnecessary, you're bound to blow through those blocks fast enough as it is, and the grid is so large that it's kinda tough to get a good overview in the short and getting shorter limit.

Otherwise, though, I like it. Good for some quick strategizing and mental math.

The game is gone from Jayisgames' link. I was a bit ticked off, until I found it at another location.

[Thanks for the note. I've updated the links in the review above. -Jay]