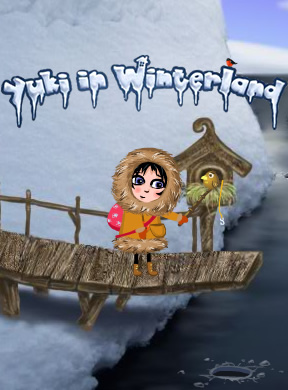 "Cookies crunch, are you listening? In the gorgeously illustrated world, snow is glistening. A kid-friendly game, how happy we... am?, playing Yuki in Winterland." Hmm. Maybe my song-writing needs work. Or maybe I should try to be more like this largely non-verbal point-and-click adventure story from FlashTeam. Well, it worked to tell the story of an adorable little girl on a cookie-delivering quest, but my review of it sadly must use words.

Don't expect a fiendish challenge if you're a veteran escape artist or adventure gamer. This is more in the league of Halo & Pixy and other linear point-and-click games primarily intended for children. Sometimes Yuki in Winterland even indicates where to click. It sidles right up to that "interactive storybook" line, but doesn't quite cross over into it, thanks in part to a few mini-games, such as a stealth game where you must hide from a yeti-thing and a snowboarding game where you must avoid obstacles. Even their difficulty is minimal however. This is a game that any six-year-old with a mouse can play without getting frustrated. Look for obvious or only place to click, click on it. Rinse and repeat, enjoying the soothing sounds of birds and music and the eye-catching designs.

There's a sinister underbelly to all this picture book scenery and big-eyed cuteness, however. Yuki seems to have a fairly... unique sense of morality. Most fairytale heroines behave just as their creators think little girls ought to, whether that's the traditional sweet and demure damsel or the modern I'll-rescue-myself-thanks type. In either case, the heroine generally tries to help the innocent, and if she fails to, she's called out on it and we are meant to learn from her mistake.

It isn't that Yuki is relentlessly evil or sadistic, since she does help several creatures along the way. She's amoral rather than immoral, helping mostly inasmuch as it furthers her own goals and displaying a disturbing willingness to commit mayhem on innocent bystanders, often in situations where it's completely unnecessary. Couldn't Yuki have first tried asking the stranded passenger for his chewing gum, rather than throwing a stick and causing his dog to drag him helplessly over the ice, so as to allow her to steal it from him? Her expressions remain generally serene, whether she's kindly defrosting a wizard or cruelly ripping a worm from a bird's beak. I was expecting at any minute for her to stare directly into my soul and begin intoning in a guttural voice, "Foolish humans! Yuki does not share your pathetic concepts of 'right' and 'wrong'. Now that you have outlived your usefulness, Yuki will destroy you!"

Ah well. At least she'd look darn cute doing it. This would be a great game to play with a child, unless you've noticed any sociopathic tendencies in the kid. If you decide to take the risk, I'd like to say firmly that we here at JayIsGames are not responsible for any bloodbaths and/or book reports on Nietzsche that may result. You have been warned.

Nice and quick game. I see joye's already beat me to the walthrough, though. :)

I've clicked on this twice and so far it looks like Yuki is wearing a white parka in Winterland. Or maybe it's just a blank screen. No, wait. There are some polar bears coming. And they brought vanilla ice cream and a flag of truce!
Nope. Game won't load.

[If the game doesn't load for you, play it over at Addicting Games. -Jay]

So in the course of the game, Yuki has:

Had a guy dragged across the ice and made him miss his bus - just to get his gum.

Popped a perfectly nice balloon for its string.

Left a guy hanging from a string twenty feet above the ground.

Broke into a sleeping bear's house to steal a hat and a carrot.

Cause spillage and mayhem in a cafe.

Broke into an ice-cream factory.

Snatched a little bird's only meal, a worm.

Stolen candy from a machine.

Is anyone having problems with jumping over the objects on the conveyor belt?

Can't load the game... anyone have problems too?

[If the game doesn't load for you, play it over at Addicting Games. -Jay]

Hmmm interesting and cute game but the minigames were tough for me heh. Probably cause I'm like a total loser at these kind of games. Overall cute and easy game and definitely great for passing time!

Also I love how you just need to move your mouse around to see which objects are highlighted in purple so you can click on it heh cause again I'm a loser at room-escape games :/

Lackluster minigames that are neither compelling as story addition or in their play mechanic.

Morally ambiguous main character who is hauled along on a linear quest of little consequence, with no choice in the matter as to direction, just click everything on the screen and follow the arrows.

Even with the caveat that it's suitable for 6 year olds (don't know many 6 year olds that like linear choice pixel hunts, but whatever, I don't have kids) I can't think of one good reason why this game should score above a 4.

Worse than Little Wheel, and that was bad enough. Might as well just tie all the actions to the spacebar, and we can just press repeatedly until the 'story' is over.

2.5/5, possibly a 3 if you give bonus points for good art (although I'd take it right back for the lame 6 second audio loops)