Turn-based RPGs have a reputation for being repetitive and full of grinding, but Craze's free Wine & Roses aims to change all that, offering up challenging and complex strategic gameplay... all at the cost of backstory and exposition. As the game begins, you find yourself controlling a dapper skeleton leading three young women towards a dangerous castle. Who are they? Well, if you check out their descriptions, it seems they're a bunch of exorcists who are being lead by Lord Francisco (that's your skeletal avatar) to purge the spirits haunting his castle. Not that any of that is important, or even hardly addressed at all, since the goal here is not to provide a deep, dramatic RPG style narrative, but rather put you through a gauntlet of 30 increasingly difficult boss battles, where success hinges on careful strategy and swapping and equipping the various spells and skills you'll earn. 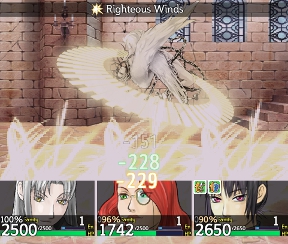 So in other words, though you might feel like you've walked into a movie theater halfway through when the game begins as you approach the castle, you haven't missed anything. Use the [arrow] keys to move, [X] to open the menu, and [Z] to interact/confirm choices. You can save anytime you like from the menu, and since battles don't start until you walk up to monsters, you should take your time preparing for them beforehand. Nynavae, Carmanth, and Argent all have their own strengths, and they each begin with a handful of different abilities. As you progress, however, you'll earn more skills and spells from helpful sprites you can assign to any character you choose and swap out between battles, though of course certain characters are better at certain abilities than others. You'll also be granted Gifts (equipment) occasionally from some characters that you can equip. Combat is turn-based, and since you don't get to grind levels, winning comes down to carefully managing and swapping around your skills, and thinking out each character's action very carefully.

During battle, your turn lasts until your characters are unable to perform actions. Each ability requires a certain amount of Energy Points to use, and you gain a set number per character, per turn. Some abilities require you to spend a percentage of your sanity, however, and like your hit-points, you don't want to run out of that in the middle of a battle. Figuring out an enemy's weakness, either Lunar or Solar, can turn a battle around, but you might be better off escaping from battles if you're having too much trouble. After all, only the first few battles occur in a specific order, and you'll soon be able to explore the Lord's massive manor. If you're having difficulty with one fight, consider exploring for any skills or gifts you might have missed, and tackling different battles to get stronger. 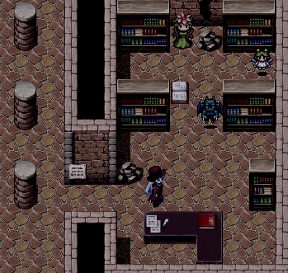 Creating an RPG in a month seems like a gargantuan task if you plan on making a quality one, but Craze's approach to the 2012 RMN All Hallow's Event is a clever one. By leaving out so much of the story, except what you can infer by character description and the scarce chatter, the development time was given to providing the sort of remarkably deep and challenging turn-based combat these types of games rarely see. It's sort of like Disgaea's combat-driven gameplay blended with, say, Final Fantasy 7's materia system, and the result is a game packed full of some really difficult battles that feel like they come down to thinking and strategy over mindless attacking. The downside to this is the huge fortress the game allows you to explore without a map can mean getting lost, simply missing helpful abilities or gifts, and being unsure as to whether you just stink at a particular battle or need to leave it until you're better equipped. If you don't mind the lack of gripping narrative and have really been salivating for RPG-style battles that feel like achievements when conquered, however, Wine & Roses is definitely worth checking out. It looks and sounds fantastic, and provides around four or more hours of extremely challenging battling and exploration for free. Who needs spiky-haired anti-heroes with women problems anyway?

I'm amazed this was made in a month.
I'd disagree with your claim that there's little narrative though; the scarce chatter reveals quite a bit once you've seen enough of it. I haven't finished the game yet, but there's certainly the beginnings of a plot in what I've seen:

Lord Francisco is a believer in the Faen Trinity, a Pagan/Satanic style religion, and was performing human sacrifices. Most of the local people worship Helena instead. When they learned what Francisco was doing, they opened a gate to Gehenna in his mansion. Though the later areas have also started suggesting that this is just what the exorcists have been told by Francisco, as a spell like that should be impossible for some angry villagers to perform, and wouldn't explain why he's a skeleton. Even if they don't believe him, they still have to work with him, as the gate is still open and has to be closed.

Characterisation wise, Francisco constantly mentions his wife and son. At this point, I've just fought the now undead son. Francisco started off making his usual puns, but his last line of the fight was
"I'm leaving. I can't watch you exorcise my son and his lover" :(

I'm not expecting his wife to have fared any better.

Apologies for the large block of text :)

My only complaint about the narrative would be how disjointed it can be; depending on the order you get gifts in, you could hear Francisco wonder if someone he knew survived, even though you've already learned the answer. While it's still a much more bare bones story than most rpgs, it's also a lot more than I was expecting based on the review.