Who Am I? Remake

Hooray! Japanese escape game designer Robamimi has made the excellent decision to remake one of its early, nice-but-flawed games into a much higher quality piece of work. Even if you've played the original, Who Am I? Remake has been given a thorough enough makeover to justify another look. 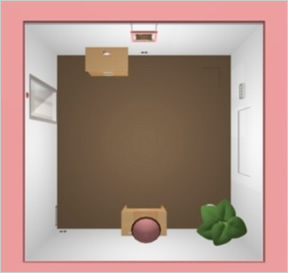 Though the original Who Am I? was good-looking and contained some clever puzzles, it suffered from a lack of polish and occasionally crossed over into illogical territory. Robamimi has ameliorated these problems by reformulating (and, in numerous cases, entirely changing) the game's puzzles, cleaning up the interface and adding a save feature as well as a twinkly soundtrack. While all of the game's puzzles are well-designed, I found one in particular to be quite sly; if at some point during the game you feel as if you cannot proceed without knowledge of another language, take a step back and reconsider the information. By thinking "out of the box," as it were, you might find your answer. Oh, also, if at any point the game's super-sweet soundtrack becomes irritating, you can turn it off by clicking the square button above the inventory.

While Remake: Who Am I? still doesn't quite approach the brilliance of the very best escape games, it's nonetheless smart and skillfully executed, an enormous step up from its antecedent. If you're a fan of the genre, you'll surely be grateful for Robamimi's overachieving ways. Enjoy!

Play Who Am I? Remake

Who Am I? Remake Walkthrough now available!

Who Am I? Remake Walkthrough

Don't forget to choose English before you start (unless you can read Japanese)!

Who Am I? Remake Walkthrough

Don't forget to choose English before you start (unless you can read Japanese)!

Note: you can change the language in the menu screen. For people like me who don't notice that, it gets very hard to solve that last puzzle!

Even after looking at the spoiler for how to use the remote, I still don't understand how you got that combination.

are the code. Press the buttons in order they appear 1-6. Make sense?

the 3 buttons correspond to the positions of the numbers in the room, push counting upwards.

I Think we are talking alternate ending here too...

I found the screwdriver behind the door where the last hint card was and it seems that the candle can still be highlighed, the clock is still unused and there seems to ba a slot underneath the coloured blocks which does nothing

Enjoyed it! If it wasn't for the

grey box with the 4 numbers

I would have gotten it w/o the walkthru. I don't think I ever would have come up with that solution.

There's a step missing. Where is the magnet?

Thank you, Shazbot! Makes sense now that you say that.

I understand how to enter the code, I just couldn't get the logic behind it.

Is on the underside of the brown square that you pried out of the floor. Click on the square to turn it over and you will find the magnet.

I agree, there has to be another secret ending.

Rats. I needed the walkthrough for two things:

The remote and matchbook codes

I should've known the first, but I never would've figured out the second. Well, I guess you can't do EVERY escape game on your own.

Fun, nonetheless. Thanks to JIG for featuring it and grinnyp for the help.

Excellent game! I like the riddle ending - that's a nice touch.

Ah, I remember playing the original version, where the hints were less translated, and I still couldn't figure out the character number trick. (both times, I thought it related to something else, like how they differed in both appearances) I couldn't find the fifth hint, but I didn't really need it.

I'd like to write hints for this, but I'd rather read the point of view of Sonic Lover's attempt...

The gray box with the four-digit code had me confused for quite some time.

the clock was used. The clock is placed there so if you look at the lines on the lamp, you will understand that they are telling time and you must match them with the clock.

Much easier than the original, but still a lot of fun. I love how everything made sense this time around, hah.

I really liked this! It was perfect for my ability level, I got it all only using in-game hints twice... and I found them not to be spoily at all.

Especially matchbox puzzle! Very cool. It reminded me of

that there is a method for associating each symbol with a number. Once you know that each of the gray box symbols corresponds to its number for a reason, it's not hard to figure out what that reason is.

Okay, not bad, but

the clock was a lousy hint. I spent a good few minutes running around looking for hands to stick on the darn thing before checking the walkthrough.

This is the first game that I haven't been able to start. The loading is stuck at 72% and it won't do anything. Any suggestion on what to do to start it.

[Edit: Try emptying your browser cache and then reload the game page. -Jay]

look behind the glass door and see a broken screw driver? the one that the marionette is holding at the end?

...is this part of a secret ending?

I'm a little skeptically on what that is, let me know what to and thanks.

Did anybody ever use the backside of the remote control for anything?

Another possible answer to riddle:

Thunder. Every clue fits but it doesn't work in the game. I was so sure that was the answer to the riddle too... I kept typing it with different capitalization. haha

I thought I was getting through with deleting my browser but it still gets stuck, now at 66% any other options :{

Finally I was able to get the game to work, but on the last part where into: What or how are you to enter, I'm really stumped!

When you get the glass door open and move into that little corridor, you need to turn right. There is a gray box with a button labeled "enter". Click on the white area with your cursor and type in the answer to the riddle, then press the enter button.

Am I stupid or what I don't want to give the riddle away but it's right in front of me!!!
Thanks

I liked this, it was pretty easy, even though I did use the walktrough (but that's because I'm lazy:P). The answer was bit obvious though, I guessed it from the second hint:D

i liked this game too ^^

The only thing I didn't like about this was the thing I hate about almost every room escape game: item hunting. That is the main difference I see between point and click adventure games, where you use elements on the screen with other on-screen elements, no inventory required. I don't even mind if the items are there, but obvious. I just don't need the trouble of hunting around every object and up and down the room.

The song is so freaking cute, I had to find it. I saw the address of the orriginal tunes in the "credits" and visted. Though the site is in Japanese, I used Goodle Translate on the page and found you can download it for free, along with many other songs. They do a bunch of music box songs. It's called "TAOYAKANI" if you want to find it :)

I'm a little late, but a couple of comments.

JIGuest, the backside of the

remote is a clue to use the picture to decipher the numbers.

the marionette behind the planter is playing "hide and seek" with the screwdriver you took. The one that is "hiding" behind the door at the end. :)

I spent the longest time trying variations of the solution like "Shadow" and "I am a shadow" before I saw the comment about capitalization and thunder, which made me realize I shouldn't have used a capital letter to start, apparently. Other than that, good game, except I found it easier to solve the riddle than escape ^^