All three games featured this week seem to be a bit on the chilling creepy eerie ominous side of things. Nothing like hordes of zombies leaping from behind locked doors, more like quiet, haunting environments that are suspiciously empty but filled with cautious intrigue... 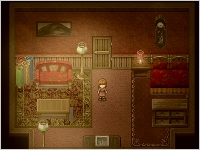 The Mirror Lied (Windows, 7MB, free) - A spooky, horror-themed RPG that plays more like a top-down room escape game. It's rich in ambiguity, and as you start you're treated to some cryptic phrases before waking up in a dark, empty house. Move around the rooms interacting with the objects and gathering items to solve the game's simple puzzles. It's a short experience, only half an hour or so, but worth it for the atmosphere alone.

Takishawa is Dead (Windows, 2.3MB, free) - A short, simple, and unpolished 3D platformer created using Game Maker by Andrew Brophy. The art style makes it a treat to see, and even though the game itself is rather standard, it's a good experience and feels different enough to be entertaining. Use the [Z] key to read text and talk to people, [X] to jump, the [arrow] keys to move and [WASD] to switch camera angles. 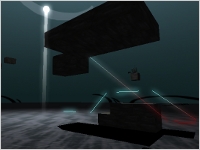 Somnia (Windows, 30MB, free) - A demo for a game in the works from Cryptic Sea, Somnia is a 3D game that's all about light and shadow. Move around the nightmarish world using standard first person controls, but when you stand on a ledge, take note of where your shadow falls. If it touches another object's shadow, you can use the left mouse button to switch to a 2D "shadow mode" that allows you to gain access to other parts of the world. Roll about in shadow mode, and when you revert to 3D, you'll appear wherever your shadow was. When the mechanic clicks, it's one of those ah-HA! moments I love to experience in a game.

Note: All games have been confirmed to run under Windows Vista and are virus-free. Mac users should try Boot Camp, Parallels, or CrossOver Games to play Windows titles, Linux users can use Wine. If you know of a great game we should feature, use the Submit link above to send it in!

The Mirror Lied had a short RPG concept to it, but overall, it was worth it...

Somnia seems to require OpenGL 2.0. I'm a little confused on where I'm supposed to acquire that, and how to use it.

Hmm, it seemed like there was more to The Mirror Lied than what was actually in the game

I thought that the way The Mirror Lied used an RPG maker to make an almost non-rpg detracted from the appearance, especially in the inventory screen.

The Mirror Lied was interesting... but I'm not sure if I get what was going on in it. I'm sure we weren't supposed to fully understand, so I guess that's okay... but

What was so bad about this Birdie? I don't really understand why she had to kill it. And what was the point of turning on the furnace to light the house on fire... only to go to bed?

Takishawa is Dead seems fun, but I'm a little too impatient right now to deal with its difficulty.

And Somnia was pretty fun while it lasted. It's such a weird game mechanic that it took me a while to figure out how to work it, but it really works great. Wish we could play all the levels!

I can't figure out how to

in "the mirror lied"
can someone help me?

Use the "esc" key to pull up your inventory, then go to items. Select the bullets and hit "enter".

Yeeeeeeeeess, horror RPG! And reassurances of no cheap scares! Don't care about the length, I am SO there. I'd never heard of this one before, John. Thank you! You win +1000 stars!

Since there are so many RPG Maker games out there maybe they should get their own section or day.

use the X key to open the inventory screen

I thought The Mirror Lied was great. The atmosphere was great thanks to some wonderfully placed music. I would like to see more games like that if a little longer. Takishawa is Dead was a little annoying. The artistic design worked well but parts of it are frustrating. Im about to try Somnia so wish me luck.

Somnia was interesting, but I couldn't figure out how to solve the 2nd level. I got all the others, but not number 2. Anyone have any suggestions?

Do the switches do anything in The Mirror Lied?

I don't care whether games work on Windows Vista. People have restored Windows XP because Vista is simply (let's keep it civil) BAD. It would be much more helpful if you told us whether games work for commonly used operating systems.

And please get rid of the annoying IE 6 banner or at least make it removable. If I'm using IE, it's because Firefox and Chrome aren't working properly.

What about Windows XP. Do the games work for that? It's still more commonly used than *vomit* Vista.

And please get rid of the annoying IE6 banner. I read the thing I don't want to scroll down to see stuff I actually want to read.

@MacGyver: Well, I didn't try the other games, but on my PC (with Windows XP) Somnia doesn't work because my graphics card isn't OpenGL 2.0 or higher.

Too bad, because I was looking forward to playing it. :(

Also, Jay, have you thought about adding an XP or Vista or Win2000 tag?

@MacGuyver: Just because you don't care whether it runs on Vista doesn't mean no one does (I definitely care, and appreciate that it's been specified, so thanks, John). They're far more likely to run on XP no matter what simply because, as you said, more people still use it - similarly, more games run on PC's than Macs.

MacGyverMagic: Well, I'm sorry you don't care! Like Cat said, isn't it reasonable to assume that if the game runs on Vista, it runs on XP? More people report Vista problems than any other OS, which is why I say "these work on Vista". I run Vista and Linux, not XP, so I feel I'm covering a good base of potential problems with that last paragraph.

And in regards to the IE banner. I have no clue what you're talking about.

There's a simple way to get rid of the IE6 banner: use a modern browser.

IE6 is one of the worst browsers you could use today, and it's extremely annoying to support, even more annoying than seeing that banner continue to pop-up.

The world will be a better place when that browser ceases to exist.

none of these games work for me. specifically TML won't extract properly, TID says the file doesn't exist, and Somnia says i need OpenGL 2.0. i have vista and i've tried multiple browsers both yesterday and today. oh well.

I run Vista. I also run XP on another computer. Diddums you hate Vista, but some people run that because they do not have the time nor money to remove it when it's already on their system. Vista has actually served me better than XP.

Stop being so selfish and bratty and demanding that the reviewers don't notify readers on specific systems. Instead, be a bit more polite and ask if it runs on XP? Which it presumably will.

does the mirror lied have multiple endings?

Ignoring the Vista/Xp debate and going back to the matter in hand I thought Mirror Lied was a great story/game/experiment (not brilliant but very very good). The controls and mechanics were slightly frustrating but it seems fairly early on that you realise it's not what the 'game' is all about.

It's interesting our reaction to a game which is dressed up to be something (RPG) but is actually something else. The unsettling feeling went nicely with the story.

I don't think - "think" being the operative word - that The Mirror Lied had multiple endings. On which note, I really rather enjoyed it, but I do tend to enjoy that sort of thing. Anyone have any screwy theories on what it all meant? I have a couple - good old

As short as The Mirror Lied was I enjoyed it, though I admit I have no idea what the plot was about...

my thoughts on The Mirror Lied plot

nuclear war. birdie=plane carrying bombs. see how continents gradually disappear from the map? it's at about same time the phone guy says the birdie flies over them. that's why the house burns at some point.

Why, if these are guaranteed virus-free, does The Mirror Lied give me a ping for malware when I scan it?

Apparently some anti-virus softwares have placed all RM(XP?) created game files (Game.exe in particular) into the malware category because in the past, one Game.exe from a RM created package was found rotten.

In The Mirror Lied,

Where do I find the access card for the computer? I'm also missing a few keys.

Also in The Mirror Lied,

How in the world do I get into the blocked room?

I got worried when the house caught fire and thought it was game over. I didn't realize it was part of the plot.