Now it's time to break the rules. A little. This edition of Weekend Download highlights winners of the 2008 Unity Awards, games created using the Unity plug-in that are playable right in your browser window. Technically they're browser games, but since you have to download and install something, they're downloads, too. 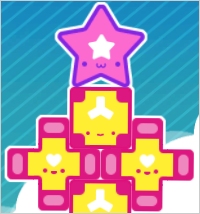 Tumbledrop (Mac/Windows, free) - Walking away with the Best Gameplay award, Tumbledrop is a physics-based puzzle game where you hover the cursor over blocks and, when the timer empties, that piece will disappear. Keep the star from tipping into the water and move it to the ground below to win. And come on, don't you just love the little faces those guys make? Especially the star when it starts falling into the water... 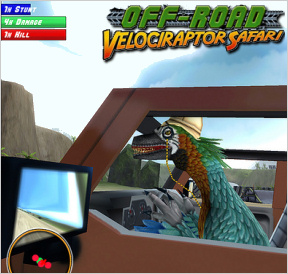 Off-Road Velociraptor Safari (Mac/Windows, free) - An arcade-style game where you play a raptor driving a jeep with a spiky ball and chain attached to the rear. Your goal is to chase down other raptors and throw them into a teleporter that sends them to the future. Seriously! We gave this game a full review when it was officially released back in January. 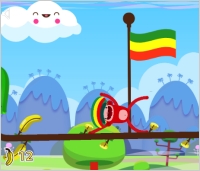 Rasta Monkey (Mac/Windows, free) - Although it didn't win any official prizes, Rasta Monkey was voted one of the favorites on the Unity Forums poll. You play an extraordinarily happy monkey who tumbles from branch to brand collecting bananas. Hold the [spacebar] to gather up momentum and send yourself flying through the air.

Mars Explorer (Mac/Windows, free) - Another game that didn't score an official prize, but I loved it all the same! Mars Explorer is a 3D planetery exploration game that delivers exactly what the name promises. You spawn as a rover on the red planet whose only goal is to ride around looking at the scenery. Play a basic game of laser tag with online opponents, or just sprout wings and fly around taking in the view.

Yeah, looks like they pulled it. :-( You can still check out a video of the game at the official website.

Everything is Mac compatible! Four whole games! Thank you very much JohnB.

Fantastic! I love Unity web browser games! JIG should definitely cover more of them, because, well, I can never find them! These were all lots of fun. The faces in tumbledrop were priceless. I dunked that little star intentionally so many times...

Mars Explorer was fun, but the multiplayer was really buggy. It could use some ironing out of the kinks.

It seems that Unity and Google chrome don't like each other... :( the controls just don't work for any of the games!

I'd like to play Rasta Monkey but I can't get it to work properly in any browser. I downloaded the latest Unity plugin, but no buttons show up on the title or Level Select screens (though I can continue by clicking wildly until I hit wherever the buttons must be), and in the game itself only the monkey's arms and legs appear, as if the character were a big letter X.

I like knocking the shapes off the best! XD But tumble drop is my favorite game out of this selection, and i especially agree that the stars expression before it falls into the water is HILARIOUS!

Why so few comments for this? There's some good stuff here.

Velociraptor Safari got several dozen comments on its own earlier this year.

Jay, I think you've linked to the wrong page. There's absolutely no mention of the Unity award winners on that page. Unity itself doesn't seem interested in announcing who they are.

The best info I could find was here:

Some of the winners are really fab - I've only played a few but so far I love Jetpack Brontosaurus (it has levels and multiple missions) and Downhill Bowling the most. Much better than Mars Explorer.

Worth picking out the best of the list for a future JIG?

I enjoyed the heck out of Mars Explorer, though the controls were a bit weird.

Tumble Drop was good, but with no high score record, and some levels that really felt like repeats, it lacked a lot of replay value.

If the game had (even local) highscores for best time/moves/most shapes remaining, it'd more than twice as good.

The Tumbledrop levels start repeating around 15, and then just loop back around to Level 1. Cute indeed, but it doesn't last long.

I wish Tumbldrop gave you a "Yay!" at least when you finished. I finally got all 20, and then I'm back at #1. Not even a check mark. HOW unsatisfying. :(

For those of you who haven't tried Rasta Monkey yet-it's now on a limited $1 sale until April 5th. Very very worth it!!!