Eels, phonic substitutions, time-traveling groundhogs, and a game that lets you beat up Kirby-like avatars that represent people from around the world. Let's all join hands and sing a song of — OH MY OMELETS THE EEL IS EATING ME!!!

Phun - (Mac/Windows/Linux, 2-7MB, free) - You've seen this physics-based playground before, but now it's available for MacOS X! Create scenes using a simple set of tools (you can even add water!), then unleash your creation and see what chaos ensues. It's a cross between a World of Sand-style toy and Armadillo Run, and it really is as entertaining as the name implies. 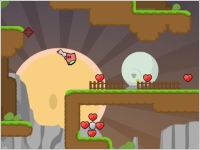 Teeworlds (Mac/Linux/Windows, ~4MB, free) - An online multiplayer game of Worms-style fighting! Hoorah! Using simple FPS controls, this colorful 2D brawler puts you in control of customizable characters who pick up weapons and beat the squeals out of players from around the world. Because this game is open source, the level of customization is high, and the matches are quick, often frantic, and loads of fun.

Choke on my Groundhog, YOU [email protected]#$% ROBOTS - From Kloonigames comes another experimental work, this one focusing on groundhogs, robots, and a replay feature similar to the theme from our 3rd Casual Gameplay Design Competition. You and your time-traveling groundhog sidekick (you read that right!) must eliminate every robot you can. Get hit, tap the [spacebar], and you begin again, the ghost of your pal returning to blast foes while you do the same.

Avoid the Evil Space Eel (Windows, 7MB, free) - A short game made by Nifflas, the inimitable author of all things Knytt, entered into the No More Sweden friendly competition. Fly your ship with the mouse and avoid the oncoming blocks as well as the ever-chomping eel. Use the [A] and [S] keys to play the drums along with the background beat for an extra bonus.

Strong Bad's Cool Game for Attractive People (Windows, 69MB, demo) - From the same studio that brought us the superb Sam & Max adventures comes another episodic adventure series starring the e-mail answering, Trogdor inventing Strong Bad, "hero" from the animated internet cartoon Homestar Runner. The game captures the signature humor remarkably well, and it's strangely fun to be able to play the boxing-glove-clad character after all these years. The game is also available for WiiWare.

Wow, this must've just been posted a minute ago. I usually click "join in the discussion" expecting a thousand and one comments before me.

Anyway, it's great to see a Homestar Runner game has been made. Too bad I'm on a mac. Oh well, at least I can give 'Phun' a try. That looks great.

Yay! Strong Bad's Cool Game for Attractive People! But I can play it too!

I'm a real fan of teeworlds, but actually it has been featured already on JIG (named teewars at that time)... I was the one who purposed it back then. But personally I certainly don't mind to see it twice :)

How do you grapple in Teeworlds?

The teeworlds review is incorrect, while worms is turn-based, teeworlds is in real time.

Choke on my Groundhog, YOU [email protected]#$% ROBOTS is such a good game.

and instructions on how to make your own levels:

That was cool. A nice twist on the old Robotron game. Sure there's only four levels, but it's easy enough to add your own.
All you need to do is create a text file in \data\levels and add some numbers to it.
the first line is the level time in milliseconds.
the remaining lines indicate the time at which a robot and what type of robot that will be.
E.G:
60000
1000,1
2500,2
7000,3
30000,4
This would the game that this level lasts for 1 minute (60 000ms)
After 1 second a Big Bad will appear (the one with the gun)
After 2.5 from the start seconds a Homing will appear (red robot)
After 7 seconds a Moving will appear (blue robot)
After 30 seconds a cluster of 5 Movings will appear.
The list needs to be in chronological order for all the robots to appear at the appointed times.
Once you've created a level, edit the levels.xml file and replace one of the level_0X.xml file names with the name of the file you created.
To play your level straight away, set jumpto to one less than than the position of your level.
E.g. (angle brackets removed to to show example on a webpage):
if you had a line that looked like this in levels.xml:
Level completed="0″ filename="data/levels/level_05.xml" position="5″
and you changed it to play your level, ‘mylevel':
Level completed="0″ filename="data/levels/mylevel.txt" position="5″
changing the number between the jumpto tags 4 will load your level straight away when you start the game.

I did not make the level pack or write the instructions, they were both done by a commenter on the kloonisgames blog called v.dog

Teeworlds is awesome. IMO it should have a full review, not only is it a great game, but it is open source and works on all platforms. I don't think a paragraph does this game justice.

BTW, my username is (lazor·leader)jon(ªº)

Nifflas...drums...eels...*shiver*. So seriously. How do you play that game?

I don't know if I'm being completely stupid or what, but I can't figure out how to make water or explosives in Phun.

. . . You can make explosives in Phun?! I'm having a great time playing around with Phun, but it keeps eating up all my RAM.

For water, you make a box or whatever and right click, then under 'Geometries' there's an option that says 'Liquify Selected.'

Teeworlds deserves its own review, for sure.

I play this game for about a year as i remember.
I thought JIG is news.

OK then, how do you make these motors I keep hearing about?
And thanks for the tip on the water. I should really look closer at the menus.

For Avoid the Evil Space Eel, this is how you play:

There are several "sessions" of drum beats. Each session starts with the bar on the top of the screen getting highlighted (sort of like a % completion bar from both ends) until the entire top bar is highlighted. While this is happening there is a drum beat being played. There are two key sounds in the drum beat that you must listen for and try to recreate with your A and S keys. You are trying to play the beat back with the same tempo. Your instruments (A and S) only sound approximately like the background beat. If you hit the correct key a letter "A" or "S" will be shown in the top bar. If you hit any key out of sequence you'll see an "X" and you won't get any points. If you finish the sequence correctly and with a tempo that closely matches the preplayed beat, then you'll see a % number and the top right and the eel will back off a little bit.