Enjoy a feisty romp through a flat, 2D dungeon now and again? That's good, because this weekend we've got two games that drop you in the middle of a maze of corridors and monsters with only a pixelated sword to save your hide. And then there's a fish that eats other fish and faeries that collect shiny pollen. Go figure. 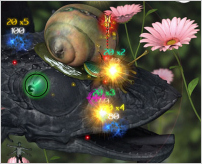 The Great Tree (Windows, 39MB, demo) - A simple, relaxing arcade game with some of the most beautifully enchanting artwork I've ever seen. The Pollen Collectors have been bewitched, forcing their young faerie children to save their race. Venture into the dangerous forest to collect pollen as you avoid creatures both large and small. A somber game with engaging storytelling and an upgrade system lets you tweak your character as you progress.

The Griffon Legend (Windows, 19MB, free) - An action-RPG with an odd claim to fame: it's the first completed role playing game made with FreeBasic. Use the [spacebar] to attack enemies and the [ctrl] key to bring up a rudimentary menu screen. Great music, catchy gameplay, and surprisingly detailed environments that feel just like a slice of retro gaming heaven. 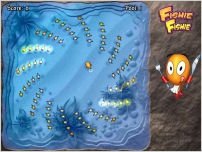 Fishie Fishie (Windows, 3.7MB, free) - Are you tired of games that use all those wacky, complex button set-ups? Fishie Fishie feels your pain. Pick a key, any key, and use it to guide a fish around the pond to devour other fish. It's that simple, and it's surprisingly fun! And while you're on Farbs.org, try Polychromatic Funk Monkey for a unique platforming experience.

Tile Crawl (Windows/Mac/Linux, ~2MB, free) - A graphical version of the original Linley's Dungeon Crawl, role playing doesn't get any more basic than this. The non-ASCII visuals are much easier on the eyes and make the game far more inviting to new players, but at its core Tile Crawl is still a bare-bones RPG with tons of character races, items, spells and more.

umm... how do you rate 4 games with one ratings bar?

In Griffon Legend I can see the electric shock spell but I can't seem to walk over to it, even though there appears to be nothing in my way. I have no idea how to get to it. Can someone help me?

Ooh, these look fun. I'll have to pass up on The Great tree though, game demos always stop just when its getting fun, and I can never buy them...oh well. I've already played Crawl, and while I'm tempted to play it again, I'll start with The Griffon Legend.

P.S: If I remember, theres an upgraded version of Crawl somewhere...Something along the lines of Crawl Stone Soup. Just thought I'd let you know, either game is fine.

Trey: You can't reach it because it's in a pool of water. Come back later when you find something to deal with it.

Neonaxus: I have the full version of The Great Tree, and this game is just the opposite. It starts out feeling like a really neat and fresh idea, but as you play on it starts to get stale as they really don't add anything new for the second half of the game. Not that I could tell, anyway, because once it started to recycle levels and enemies I stopped playing.

I'll have to check out these other games, though. You can never go wrong with free. ^_^

hmmm... Fishie Fishie isn't very forgiving. Your fullness meter drops very quickly, and after the tutorial pool you have to go back to the beginning of the level set if you die. Also, I understand what they were trying to do with the jarring sounds and shaking visuals when you start getting hungry, but the overall effect irritated me to no end.

However, Polychromatic Funk Monkey is definitely worth a look -- it's a bouncy and fun implementation of the block-moving platformer genre, and can be quite tricky at times. Each new game is quasi-randomly generated, thus acquiring its own challenges.

I hate to sound pathetic, but I must be doing something wrong. My play time for The Griffon Legend is well over 2 hours, and I'm level 9 but I'm still stuck on the first floor of the first temple. I'm afriad I might go crazy if I can't figure out how to finish.

WOW i didn't know Crawl, but it's fantastic!!!

you can get to second floor by using the stairs. They can be hard to spot but there are TWO sets - one set going straight up to a small plateau, and the other set going left from that plateau.

the lightning in the water in first temple:

I think I found a secret: stand north of it, and go south - you will go through the water and take the energy. It worked for me anyway

The great Dane: Thanks! walked past that room so many times and never noticed the stairs...

I struggled with it, a bit.

There's clipping issues, and it takes a few tries to get used to combat.

I got stuck for a long time when I finished clearing the first area & first two bosses, and couldn't find where to go...

For more than one area, it's hard to distinguish between lower & higher ground, or other terrain types. It's very easy to switch between areas when you've almost cleared out a room (essentially refilling it).

It was entertaining, but I'd put it at 3/5 due to technical & gameplay issues.

Of all the games mentioned here, the one that I spent the most time on would actually be Polychromatic Funk Monkey. Frankly, it's pretty awesome.

It's quite fun to work out your own ways of climbing upwards, but at the moment I keep messing up by cutting myself off from my staircases. It's a pretty brave game design decision, but I guess it'll teach me to stop being stupid with my constructions.

I've probably painted myself into a corner about three times now... time to start over.

Fishie fishie is fun and quite challenging, but it COULD be a little bit more forgiving, and those flashing screaming effects when you are near-death are really unnecessary.

Nevertheless, thumbs up for one-key gaming.

This is the Stone Soup referred to earlier. Crawl is a fun game, but like all Roguelikes... it's hard as hell.

The Great Tree is barely OK. The problem is, it's no challenge and has no depth. Towards the end of the game they start resorting to monsters that can kill you dead in a single hit because they can't think of any other way of making the game challenging. And once you actually finish the game, you get a text message, and that's it. :(