Before we get started on that thing you came here to do, you know, playing free online escape games, I thought we could spend a few minutes shooting the breeze. I'll start. The other day, a friend called and invited me to play hide-and-seek. Maybe it's silly but that's why it's so fun. "Sure!" I said and began to walk over there. Suddenly aliens attacked! All was pandemonium, panic and mayhem until a mystery figure stepped out of nowhere with some oddly pieced together rocket. Huzzah! Loves to heroism! Because I needed to unwind after so much excitement, I entered a relaxing little green room where a pink frog served tea and played a tune on her miniature piano. After relating my story, she suggested I go into the study, sit at a desk and write it all down. Which I started to do but, well, really now, writing is kind of hard. I stared at the windowpane lined with colorful pots contemplating how best to capture my strange experiences in words. I think this is how it all began. My eyelids grew heavy, the world grew dim and, when I woke up, I was locked in a room I'd never seen before...

Button Escape 31 - Out of Tototo Room's creative banks, comes another episode of our favorite seek-and-find escapades. This installment is just a single scene, yet it's loaded with interesting details and puzzles which is all the better for making your button-seeking practice worthwhile. Some Japanese language knowledge will help you read signs yet isn't necessary for solving your way out. Those little grey buttons are not easy to spot but, when you do, just click on them, lighting each up with a little orange smile. Got eleven? Then the door will open for you. With a balanced blend of quirkiness and thinkiness, Button Escape 31 appeals to fans of brain teasers and hidden object searches. 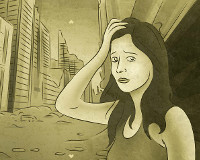 Alien Invasion Escape - One cannot review an Esklavos escape without praising Federico Rutenberg's artistic talents, not just for the visions he draws but also for the efficacy of his story-telling. These games feel like little pages from a graphic novel in which you must immerse self through detective work and adventuring. Alien Invasion is about...you know, aliens invading. You are the hero. Save the world by searching the scenes, gathering clues, and making your way through the narrative to the end. It's near enough to a point-and-click adventure, but not enough to exclude it from the Weekday Escape escape game roster. 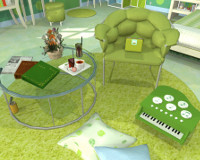 Girls Room No.6: Hair Roller - Find five hair curlers of various colors to earn the door key in this latest from FunkyLand. Some musical knowledge may (or may not) be useful here. But you can expect, as per usual, nothing overly strenuous nor too lengthy to tie you up for long. An abundance of whimsy minus the pink frilliness makes this episode more in line with Candy Rooms' vibe. As easy as these can be, it is getting tricky to not find oneself inured to FunkyLand's creative charms. That's the problem with designers who are so prominently creative: Originality and funkiness have diminishing returns if not consistently renewed. But of all the problems to have in the life of escape games, that is the least of 'em. 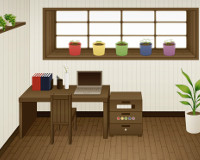 Escape01_Colors - This quietly pretty room, tastefully accented with bright colors against a neutral backdrop, is a first from 90'Escape_Game. Your first glance at it should have you wanting to play and, for the most part, it holds up to that appeal with logical puzzles. Yet the UI needs a bit more fine-tuning and some quirks of navigation, including a less-than-helpful cursor, detract from an otherwise lovely round of play. It might also remind you of some Petithima piece from years back, offering inspiration to replay and compare.

We love escape games, and our readers love talking about them and sharing hints! How about you? Let us know what you think, ask for clues, or help out other players in the comments below.

Escape01_Colors was great - especially for a first release - except for the pixel hunt! It took me ages to work out what to do with the

For those who need a hand:

You can move the chair

except there is a reason

that only becomes apparent once you move the chair back under the desk.

Thanks Jim.
I'm still missing my last piece, a yellow flower painting.
I already found the one...

behind the big plant

from under the shelf with the two potted plants

The yellow flower painting you are searching for is

behind the blue flower pot in the window

I have all the paintings and I know where to put them, but I have no idea in wich order. And I too don't have a clue what to do with the computer or the message I found in the middle drawer (the one with the colored buttons). Anyone can help? Thanks a lot!

Thanks FairyKate. I can't believe I missed that! Lol.
The order of the paintings is in the computer and you can get the password for it from the middle drawer message.

Note that you can spell two colours in the message. Ignore those colours and the rest makes the password.

The message spells 'blue' and 'yellow' which makes the password 'spring'

Ha! Thanks! That was in fact a bit tricky ;)

I also liked the Colours Escape, it was really pretty! But the UI was definitely very clunky, no feedback when clicking buttons, hard to navigate, etc. I got really stuck and only figured it out because of Jim's clue! The puzzles themselves were not too tricky, just needs less fiddly "click exactly here" bits.

Any hints on where I might find a last blue flower painting?

The reason you ignore those two colors is that

if you look at the desktop of the computer, the blue and yellow pots are missing.

Good game. I agree with everyone else that the UI was frustrating.

Sara, about the blue flower tile you're probably looking for, get ready for a pixel hunt:

There's a section of the floor you can zoom in on. It's approximately the same area where the chair ends up when you pull it out from under the desk.

Hope that helps, took me forever to find it, too!

I'm having a bit of trouble in Girl's Room 6:

OK, I confess. I first found this FunkyLand game on.....another site. I'm sorry. I strayed. I hope you'll take me back.

But I have to say, when I saw the theme of this particular Girls Room game, the first thing I thought was, "Oh man, what'll elle sees THIS!" I mean, fun game and everything, but HAIR CURLERS??!!!

Well, imagine my surprise when not even a blip about girl power poems or female stereotyping. The copaceticity of it all leaves me a bit nonplussed. What gives?

Any clues at all for Button Escape? There's a number puzzle and a color puzzle and I haven't a clue.

JCS:
Clues for the color puzzle:

Look above and right of the small hex door with the mouse inside.

This clue directs you to raise the banner and look there with the lights off.

Match symbols and colors for the lock.

JCS: For the number clue in Button escape

When you get the key, click on About and expand the key to see a picture of what it opens.

It's the thing at the top centre that records what buttons you have.

I think I also had to click on the "Open" sign to get the key to work there.

I found where the gold key goes.

That gives the clue for the red box number puzzle.