Dear loyal JIG readers, welcome to a very special edition of Weekday Escape today, with exclusive first coverage of a breaking story: Escape games, a multinational gaming obsession that has taken a worldwide audience captive and captured the attention of major corporations, legislators and research firms. As it was JIG that reported on escape games' humble beginnings, and it was here that certain celebrities would get their escape game fix, it is only fitting that we should report on new emerging data regarding the health benefits of playing these popular diversions. While this early on sources cannot be revealed or confirmed, when it's news this good, we don't want to lose precious moments not playing escape games through such time-consuming formalities as "fact checking" do we? Already the clock is ticking while we prattle on about details. All you really need to know is: This is a BIG DEAL. Already Google is inventing a new way to use self-driving cars in globalized escape games (an early prototype shows there's still much progress to be made). Rumors have surfaced on the streets of The Capitol, according to a witness who would only identify himself as "Bub", that lawmakers are now considering what, if any, limits should be put on escape game production. Our best advice: Stock up now...

Just to get you started, I dug up some of these "escape games" and tried to assemble a few words to describe them. It's anyone's guess if my descriptions are accurate or not. I mean, I think I've already done my job in just getting you to click "read more" in the first place (or did you arrive here via the brightly colored banner image or a search engine result? Oh, no matter, the point is, you're here). So with no more adieu, ladies and gents, play: 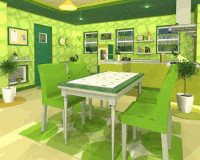 Fruit Kitchens No.19: Lime Green - This escape game was created by FunkyLand and it's about a kitchen full of fruit. The kitchen is green. Not green like a dark forest but sort of a bright yellowish green. Like the color of a lime. Which is kind of a coincidence since there are seven limes strewn about this kitchen. You're supposed to find them, then you get a key to the door. There's, like, puzzles and stuff you have to solve to get the limes. Sometimes the limes are just sitting there when you open a cabinet or something. It's pretty cool. 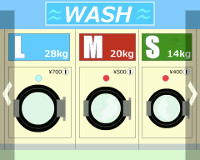 Find the Escape-Men 144: Laundromat - It turns out that FunkyLand isn't the only game designer making escape games. I did some poking around and found out this one was created by No1Game. It's part of a series. This is the 144th. Wow. That's a lot, isn't it? Anyhow, this game is like hide-and-seek. Little green escape figures are hiding from you and you have to seek them. There are also puzzles to solve, again, so hopefully you like doing that sort of thing. Anyway, the game looks rather enjoyable. Funny, even. Let me know if you like it? 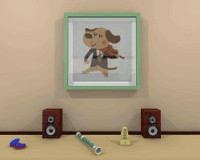 Room 5: Music Room - Okay, this game is from Ichima. Ichima is the also the author of Room 4: Cafe but instead of being locked in a cafe, in this escape you're locked in a music room. I don't know about you, but I'm noticing a trend because, like in the other games, you have to poke around the room to find clues and then solve some puzzles before you get to leave. Gee, it's like they want you to actually work for your escape or something. This game is fun, too. Or so I hear.

We love escape games, and our readers love talking about them and sharing hints! How about you? Let us know what you think, ask for clues, or help out other players in the comments below. And, by the way, Happy April Fools Day!

Find the escape men wasn't bad. The Dryer code stumped me for a min until I realized it was

Just the number on the window

Stuck on the tambourine clue in Music Room. I've found

all four metronomes, and I gather that the position of the weight on each metronome tells you which number on the tambourine you should use in the code by the window.

Took me a while to figure out the Music Room number puzzles. If you are looking for the tamborine, pay close attention to the bookshelves.

Thanks, that was the hint I needed too.

@Gabe
I can think of

three that don't require puzzles. Look closely at the door, the washing machines and the money changer.

I got those already. As well as

pressed the button on the money changer or checked your cleaned and dried washing?

Yeah. As soon as I could

That leaves us with what?

Did you solve the cube puzzle and the bear/clown thing?

I'm guessing the bear/clown puzzle has something to do with the blue paper clue, but I can't seem to figure it out as the clue seems like gibberish to me!

Music Room. What's up with the piano bench?

I'm stuck with a

drum stick and a sheet of music.

Well never mind. Power of posting, I "tried" a bunch of possible significations and it worked. I guess my japanese is improving!

did you check the side of the change machine?

What is this "FUN" thing I appear to be having? Well, I think these Escape Games might catch on after a while! I wonder if there are any OTHER programming-type people who make this sort of thing. I like puzzles and stuff. Elle, you seem to have made quite the discovery! Much appreciated!

How do I know which ones?

I'm having a bit of trouble getting the screwdriver out of the safe. I have...

...actually no clue what I'm doing sometimes. But we'll keep that between just you and me, right? ;-)

OK, had to step aside for a bit and I was truly hoping someone would happen along and provide some help for the tambourine numbers. Perhaps a gentle nudge? Perhaps a bat over the head? I've taken to just playing the tambourine for the fun of it! People would like me to stop. Help!

How 'bout it, elle? I'll but the next round for some info.
*clinks freshly refilled mugs*

Yeah. I solved those

For the Music Room tambourine, look between the numbers.

For the first number choose the number between the ones.

Momster! Yes! Thank you!
I can't believe I didn't put that together. I noticed

the double numbers in each column, but I just didn't think to use the one in between them; or even notive that there was only a single number separating each pair. aaa!

Also, was it my imagination, or did I have to

play the song twice on the piano?

I'm stuck in the music room. I have

I've solved the color puzzle and both the number puzzles, and it looks like

the metronome/record player puzzle is next, but I haven't found the C metronome. I also can't figure out anything to do at the back table, to or under the dog picture.

The white knob is a button

It's used on the right speaker

Any idea on the code for the dryer?

Look around - where do you see any numbers?

There's a phone-number on the door. Now doesn't that look like a mathematical term?

How did you open the piano??

It is not for sitting upon

I find the Ichima solutions to be VERY obscure at best, but in a way that is less frustrating and more fascinating. Even with the great oversaturation and mediocrity plaguing the genre today, this developer delivers genuinely unique puzzles set in whimsical and beautiful environments.

At times the inability to combine items feels rather limiting and unrealistic, but I find the solutions hard enough without having to worry about factorials anyway. These games remind me of the best escapes of a few years ago.

Look at the figures again.

One is a Puppet and one is a Bear

Great review full of thoughtful insights! I'm loving Ichima, too. I was so glad to come across a new designer during a time when some of my old favorites have been scaling back/stopping production. In releasing a new game in less than a month since the last one, Ichima has won me over.

Whatever the third item for the door in the music room is, I'm not seeing it anywhere.

And then clicking the pictures for the hundredth time found the magic pixel that looked behind.

One escape man that I couldn't find without a hint:

There's one that's almost invisible on the green washing machine.

I saw fuzzboxer's clue about the bookshelves, and I thought I was looking closely, but I finally had to go to a youtube video. It seems so obvious now.

The missing shelves and walls may look artistic, but they're important.

That was the one. Thanks.