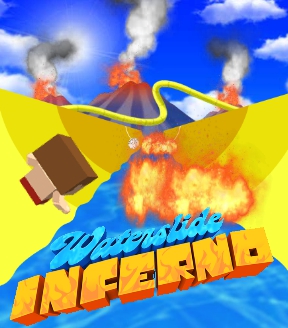 Water slides are usually accompanied by tales of swimwear malfunctions, poorly-executed exit tumbles and the sure knowledge that the further you have to climb, the better the trip down is going to be. But the people at This is Pop have decided that the whole exercise needs a bit more edge. Maybe a few flames. You must be 'this' flame retardant to ride the Waterslide Inferno, a tricky action arcade game.

The goal is to go as far as you can by moving left and right using the [WASD] or [arrow] keys. Water bottles quench the heat, but flames aggravate things. Get too hot and you will burst into flames. Get to close to the edge and you leave the slide. Ultimately there is no winning, other than beating other people's high scores. It doesn't get simpler: you have to keep sliding down an endless waterway, grabbing bottled water to keep things cool, avoiding the edges (or get flung off in cataclysmic fashion), as well as dodging the flames and the various previous sliders... who are now on fire. Collect coins as they appear to build up your multiplier and increase your high score, while keeping an eye out for hapless flaming sliders and on-screen warnings that will alert you to upcoming sharp turns in the slide.

If you have to ask why there are fires on a waterslide, well, clearly you have never heard the sad tale of Dormant Volcano Waterpark and the gypsy that cursed it. Maybe you should be asking yourself why you'd want to take one last ride down something known as a "death pipe" instead. Waterslide Inferno is not without its glitches. More than one JIG tester noted that the hit-detection is hap-hazard, with some flames seemingly unavoidable while water sometimes slips past by the hair of a pixel, though this is something that gets easier to get a feel for with time and play. Still, it's fun; fast-paced, quirky, and challenging, with an appealingly silly visual style. Besides; there aren't nearly enough games with water slides in them.

This is a reasonably competent version of the bonus stage from Sonic the Hedgehog 2. The key difference being you cant slide off the edge in this game or you die. That got so frustrating I quite the game after the first "checkpoint," which didn't seem to save my progress.

The checkpoints only seem to reset your temperature and change your level rather then be a checkpoint. Also at higher speeds the 3d effect is slightly headache inducing. Also I'd swear that by the 3rd section the turns are actually spirals.

Hmm.... I'm getting an error. "Reference error : s is not defined" The game portion of the screen remains black, but the rest of the page seems to load fine.

Not life-changing, but an amusing way to spend 10 or 15 minutes.

Fun for a minute or two, until the game lags and I die.