Don't do drugs kids, unless you're taking part of a trial study sanctioned by a doctor. Just prepare for the consequences... the mind melting, reality bending consequences. ViViD, by The Layabouts, seems like a relatively easy platform game, and starts off on such, until the pills kick in and everything gets distorted. Burt is the name of the little jumper whose only goal in mind is to get back to the doctor who told him to come in if the pills he's testing start showing negative symptoms, like nausea. Burt has every symptom but nausea, and the only thing he can keep in focus is getting back to that little medical sign to see what can be done. He'll have to get through spikes and bottomless pits with only his jump ability, [Z], and using the floating arrows that give him a boost in the direction they point. Add on top of this the jittery, reality twisting symptoms and that feat becomes something only the bravest will take on in this free indie game. 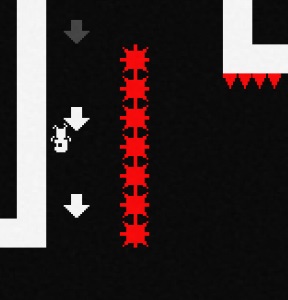 ViViD may make you nauseous, or give you a headache with its twisting scenes and corrupted music. It may even manage to give you motion sickness while only being a 2D game. But boy is it a heck of a ride... consisting of 10 days, each day has its new twist that affects the levels that make it up. On top of that is the new symptom added on, whether it's time speed unpredictability, or static taking over your screen when you move, making each day a new challenge. There isn't a double jump so the Arrows that give you a boost are the only way to get around, but soon they start to betray you as well, switching their direction to fly Burt into spikes instead of giving him the boost over them. There are some days you're going to be glad to be done, with but the end is probably still going to come too soon for you. These challenges, while not always 100% unique, are still invigorating and you'll wish to see what other tests The Layabouts have bouncing around their minds.

There is a message ViViD is trying to convey, but by the end of the game reality has been so twisted and confused, I'm not sure that their message really sticks. Every end of the day you get dialog from the doctor, but you never actually see him and his words are soon distorted by Burt's decent into a drug fueled madness. It's a really dark game when you start to apply it to life and those stuck in these situations. You can't help but feel sorry for Burt as like him you can no longer tell what is real or what is just your mind subjecting its fiction into real life. You never really know if it's the doctor speaking to Burt, and even in the end you're so lost in the madness of his mind that the final message may whiz by your spinning head, but you can still find a deep meaning behind this difficult platform puzzler.

That was an... incredibly strange experience.

I feel like I skimmed through the game too quickly to think about it, but I'd be interested to hear what everyone else has to say about it.

I suppose the very end bit has a little bit of significance, right?

Also I'm not sure whether collecting the pills at the end changes anything or not. I collected all of them, anyway.