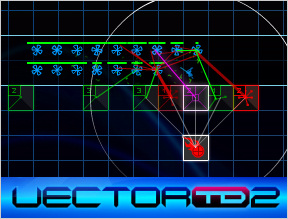 Free up the rest of your day, David Scott has just released a sequel to the stylish tower defense game, Vector TD, appropriately titled Vector TD 2. The year is 2108 and Earth is under attack from a race called the Vectoids. The only way humans can survive is to strengthen its defensive capabilities using Vector TD, a computer simulation of Vectoid attack scenarios. Deploy and upgrade towers to zap foes as they walk by, preventing them from reaching the end point(s) on each map. Earn cash by defeating foes and keep your defenses strong to stave off the increasingly powerful hordes!

The overall goal of any tower defense game is to prevent the enemy from reaching the end of the maze. You do this by placing units alongside the path that will fire (or perform other helpful actions) when an enemy is in range. With each foe you destroy you earn cash, allowing you to purchase new towers or upgrade existing ones on-the-fly. Everything is handled with a simple mouse interface and is remarkably intuitive, even for tower defense newbies. You can even specify which Vectoids certain towers target, forcing them to focus on weak, tough or the nearest enemy.

Analysis: Combining retro-style visuals with the tried-and-true tower defense formula, Vector TD 2 preserves everything we loved about the original and multiplies it, adding new maps, more units, and additional game modes such as time attack, lightning, and a curious puzzle/sandbox mode ($50,000 budget, you don't earn cash, see how long you can survive). The basic game is the same, but the strategies you'll use to win will be quite different.

What makes Vector TD 2 especially unique are the bonus points you can spend to buy special support towers. These units can either be placed on the battlefield, such as the damage booster that increases the power of nearby units, or used immediately like the interest increase bonus. Do you go for the kill or stock up for more towers? It's your call.

More of the same great (and great-looking) tower defense strategy from one of the best games in the genre.

Wow! After I saw this, all I did was say, "Vector TD2VectorTD2vectorTD2!" Over and Over. TD X addicted me even though it was ridiculously hard. TD 1 and Element 2 didn't work out for me, but this is perfect!

Wasn't this reviewed before? I vaguely remember playing a sequel to the original vector TD some weeks ago.

You're thinking of Vector TDx, which we featured in a Link Dump in December:

Perhaps that was a 1.5 release?

In Australia we are one day ahead, so you have released a tower Defense game on Valentine's Day. This is the type of dilemma that destroys marriages.

Yeah, I think that was it, Jay.

Seems awfully similar to the first 2 Vector TD games. Isn't this just kind of milking the success of the first one? Someone please correct me if I've missed something here...

So can this one be finished or is it impossible to complete like TD-X was?

I have to agree with asc. There are a few changes here, like the different modes available, but the towers are exactly the same. Labeling this Vector TD 2 isn't justified in my opinion.

Yeah I was all excited for a new TD game, but this is pretty much the same game I'd played before.

For those of you complaining, just think of it as more levels, and have fun!

I get a ton of red rockets and upgrade the first one a TON to get almost 200000 damage per hit, makes it soo easy.

Has anyone finished this? I consider myself to be a pretty decent Vector TD player, and I only got to lvl 39. I did a couple of mistakes, but if this game is impossible to beat - like TD-X - then I ain't even gonna try to do better.

TD-X was an insult. I'm not wasting more time on this until I know for sure they've learned from their mistakes.

They all look beatable, although I have tried and failed on pathways.

Start with a red refactor, and a green laser 1 when it is required. Slowly upgrade both as needed. Start adding blue rays 1 towers before the first two are fully upgraded. Hold out as long as possible and then add a Red Rocket. To finish cover all rocket range with blue rays 2 and a couple of rewinders (don't usually upgrade the blues - unless it gives them access to a lot more path.) Finally add more red rockets.
To get a really high score, you have to release the vectoids early.

I agree, not a massive upgrade, although the new game types are fun, I would have liked new vectoids and towers. Half the fun of tower games is working out the best tower combos, and I just used the same ones that I used before. seems to work.

I'm addicted to tower defense even though they are such simple games. It is something to do with the predictable pattern combined with real time game play.

I used a red retractor beam to start for the first couple of rounds, added a green laser, then sprinkled the range of those towers with blue rays. You upgrade those 2 towers until you have enough money to buy a red rocket tower. When you get a bonus, use that to buy interest instead of other options, the money really adds up in the long run. I ended the game with 5 red rockets, 4 of which were completely upgraded. Save all the money you can, only upgrade when you absolutely need to, don't be afraid to let one or two vectors get though.

thanks, bvb. I finally beat this! That strat worked pretty well for me, after like the 5th try ;p.

The last three bonuses I spent on the +25% damage upgrade, but the previous bonuses were definitely for interest, which helped when I had about 15,000 and then 20,000 in the bank.

Everything else I had was basically the blue rays, and I mean a ton of them. Even while I was still on my first red rocket or two, I opted to plot more blue rays just to delay spending another big rocket.

However the last couple levels were gruesome. Those yellow arrows were mad tough, and I wound up selling my blue rays one by one, just to buy some of those blue stuns and put those at the tail end one by one! Eventually at the final level, I had to sell all my blue rays, and wound up with a bunch of blue stuns at the end, some of them upgraded to the max, which helped a lot.

I am having trouble with ladder. I have only been able to get to level 35 with the current approach. Any suggestions (not spoilers) would be helpful.

Get only the money bonus until level 45, then get the +25% damage. Save up for only the red rockets and blue slows, and buy more and upgrade the reds as needed. keep the blues non-upgraded.

At level 49, I had to sell off my blue slows and buy the stunners to replace them. I won with 5 fully upgraded red rockets in the middle, 10 or so slows spread out, and 20 or so stunners near the end. roughly 402k score. 10 lives left

I would very much like a button to toggle the speed. Like the one in flash element td 2. It's a very funny game, but the waiting ain't so cool.

done slim pickings, pathways and ladder, anyone with tips on 2 in 1 out?

This game is frustrating.
The yellow make me spend every penny I have and them some, so I can't build interest. You can be totally kicking everything else's butt, but those come on and ruin everything... no good way to prepare for them. Boo.

thanks for the advice :)
once my cash got to 100,000-250,000 the 27%interest let me put all the level 10 red rockets and blue stunners/slowers I could ever want
Finished normal slim pickings
with a score of 5,086,320 and about 12 lives
ended up with over twenty maxed out red towers and ditto on the blue ones

I still can not get score into the 10's of millions.

Ladder and Bottleneck were def the hardest, took quite a few tries to get it right.