Greetings, NEW EMPLOYEE! Welcome to Uplink Corporation, the world's foremost "Computer Security Professional"-For-Hire service. Now, in this, the technologically-integrated futuristic world of 2010, there are all manner of data retrieval and investigative missions that need accomplishing, and we are certain the gateway hardware we sold you is up to the task. Of course, someone might find that system useful in wreaking all manner of havoc. But we at Uplink have full faith in both the morality of our employees, and our legal team's proven success at disavowing any knowledge of those who get caught. Oh. And one last word of warning: Watch out for Andromeda Research. We can't prove anything, but hackers who cross them tend to end up disconnected. Permanently. Good luck! 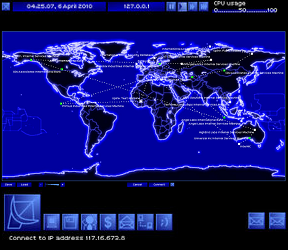 A cinematic simulation of hacking that owes more to Wargames and Sneakers than Kevin Mitnick and Adrian Lamo, Uplink: Hacker Elite is a quality and influential bit of cyberpunk intrigue. Originally released by Introversion Software in 2001, and streamlined into the Hacker Elite version for the US market, the latter is now available for purchase from the lovely indie and retro game outlet GOG, and it's a worthy addition to any gamers library.

The interface of Uplink is uniquely stylized one. Largely textual and utilitarian, it's reminiscent of a cross between the Jurassic Park computer system and a 1980s BBS. Expect a whole lot of shiny progress bars, random phone animations and password hackers that will lock in one letter at a time. Along the top you will find the in-game date and time controls (generally, the game takes place in real time unless sped up by you), a series of bars that will let you allocate CPU to various programs you run, and a world map that shows the bouncing route your connections take. Along the bottom are buttons that will display your software, hardware, memory, and financial details, and on the lower left there are the e-mails you receive. Generally, gameplay will consist of dialing the Uplink Internal Server to accept missions, hack into the proper server, bypassing the security, accomplishing the designated task, deleting all evidence that you've ever been there, then disconnecting to collect your reward. Of course, the computers of the world are protected, and if you take too long or fail to cover your tracks well enough, the FBI or worse may soon be knocking at your door. Money can be spent on upgrades and new programs which will allow you to hack higher levels of security. As time goes on, a dangerous conspiracy is slowly revealed, and you'll have to decide whether the color of your hat is white, black, or somewhere in between. 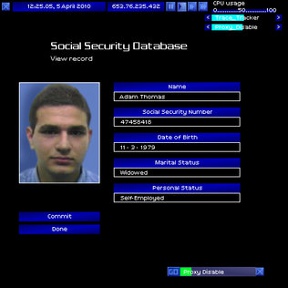 Analysis: As mentioned above, Uplink has had massive influence on the hacking sim sub-genre. Classics of casual gaming like Exploit, SlaveHack and Digital: A Love Story owe Uplink a great debt, as does, for that matter, any game which sets the player in front of a fictional interface to crack. Make no mistake: the sandbox-world of Uplink is vast, and might be quite imposing to those who find non-fictional computing enough of a hassle. However, Uplink should appeal greatly to that certain kind of techie mind that loves exploring and playing with unfamiliar systems to unlock their secrets. Certainly Uplink has a lot of in-game documentation prepared for players who find themselves lost, but the game will be most enjoyed by those who don't mind diving in before learning how to swim. Quick thinking is a requirement, as is some patience: the story is a measured tale of technological intrigue with little action not taking place on a computer screen. But its complexities grow to match those of the mechanics, making for a singular gaming experience.

Conceptually, Uplink is nearly perfect. The question, then, becomes how well the implementation has fared since 2001. The premise intentionally defies any attempts at graphic superiority, making for a timeless kind of HUD. Menu navigating feels a little kludgey, particularly when you have a number of windows on the screen that you must left-click to move, and right-click to place, when every instinct in you is expecting to be able to drag-and-drop. Also, while Uplink is a single-player game that only uses a network connection to use in-game ICQ, it's not hard to see how the stylized realism confused by someone peeking over your shoulder (and if you think that's paranoid, just ask Steve Jackson.) 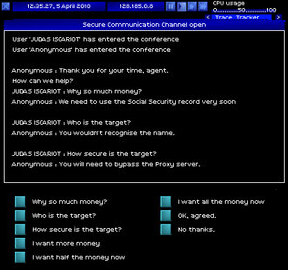 A few other things worth mentioning: Uplink: Hacker Elite only allows one save file per character, and it will be deleted should your game end. In practice, you are usually given ample opportunity to cover your tracks so that will never happens, and it adds to the supposed realism, but it still feels like gimmicky. (Of course, as fans have noted, there's nothing to prevent you from backing up your save file yourself, which seems apropos in a meta kind of way.) Finally, why don't there seem to be any females in this game? There were girls on the internet, even in 2001, right? Where's Acid Burn? She once hacked the freakin' Gibson!

Overall, Uplink is a true classic, and the package offered by GOG is an excellent deal. Sure, you won't be getting the original obsolete-even-at-the-time copy-protection code-wheel or the piece of paper that could only be found by cracking open the back of the jewel case, but the downloadable Bonus CD is packed with extras (some only TRUE hackers will figure how to unlock), and the awesome soundtrack is probably worth the price of purchase by itself. Highly recommended, especially for those who like their games immersive.

From now until July 19, get several great indie games for 50% off at GOG.com, including Uplink and Gemini Rue! See the full sale list.

Win a free copy of the game for Windows

The following are URLs to super secret, highly confidential pages here on JIG that only super intelligent computer security professionals will be able to find. The problem is 2 characters in each URL have been replaced with a question mark (?). Your mission, should you decide to accept it, is to decipher the correct URL and be the first to deliver the passcode you'll find on that page to our contact address.

UPDATE: All codes have been found and prizes awarded! Thank you for playing. :)

I got this game a while back, and while it's really fun at first and has a great old-school feel, the game has a couple major flaws in the pacing.

First of all, once you have a nice long bounce set up, you have plenty of time for any mission which takes out most of the tension, and you can always make it longer with InterNIC. InterNIC also removes any challenge from avoiding a passive trace. Second, once you pull off a single bank robbery, your equipment goes from "reasonable for your level" to "godlike," and every mission you couldn't accomplish suddenly becomes trivial. The only one that really posed a challenge was the final challenge where you don't merely need to keep ahead of the trace but need to keep a lid on the number of infected computers as well.

The other thing is that the story missions become very few and far between once you're tired of grinding the regular missions. You'll end up doing a lot of fast-forwarding and it kind of hurts the tension when there's a month of wait for a minute of hacking.

Thanks for the competition! First one I've won in years :D

I'll try out the game soon and post some thoughts. :)

An excellently comprehensive guide for the game can be found at:

Uplink is also available on Steam (along with Darwinia, Multiwinia, etc). http://store.steampowered.com/app/1510/

I had a go at Uplink and got about halfway through before getting caught. I agree with Aegeus. The game is quite fun.

There are some annoyances.

* The text is too small to read comfortably. Perhaps I need to adjust the resolution.
* Having to keep your mouse over a text box to type is really annoying. Even worse on laptop when space limitations mean the mouse tends to wobble a bit.
* Window movement/deselection is not intuitive and a bit awkward.
* A way to save more than one string of connections would be nice.
* A copy-and-paste or clipboard function would be nice.