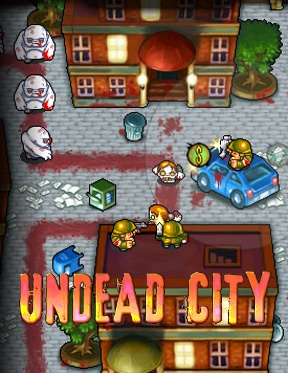 Zombies and tower defense? Provided those "towers" are actually upgradeable heroes, such as a stewardess with a laser, you betcha. Undead City from XGen Studios, is a flawed but stylish take on the genre with bite. I like to assign my zombie bait personalities based on common horror movie stereotypes. Oh, Vigilante! Even though you were a jerk all throughout the movie, you'll redeem yourself at the end with a heroic sacrifice! Probably by firing your gun off into the air and going "AARRR!" Or maybe by shooting two guns at once while diving sideways. I haven't decided. Either way, awesome.

Select humans from your arsenal at the bottom, and place them strategically on the screen so they can mow down the oncoming horde. Each hero has different strengths and weapons, so experiment in every situation to find out what works best. If the placement circle is green when you move over a spot, it means your hero will be safely out of reach. If the circle is red, however, your hero is fair game to any ghoul that passes by. As zombies come into range your heroes will automatically attack, and any zombies disposed of earn you cash you can use to upgrade your hero's weaponry and buy more heroes. You know, from the hero fields? You pluck them straight from the tree.

Like any standard nerd these days, I am required to have a rather predictable fondness for the living dead. As I've stated before, this means I tend to be more forgiving as long as someone is having day due to a rotten case of teeth-in-your-face. Undead City won points out the gate for some really charming visuals; I didn't think you could make a zombie cute, but, there you go. Despite the limited variety of heroes, there's a nice bit of strategy involved in making use of your resources and the landscape.

Unfortunately, Undead City isn't all that it could be. There's no level select, so any time you pick up the game means you have to start all over. The "safe high ground" concept is good, but strange; safe on a rooftop I get, but since when does standing a foot off the ground on an overturned mailbox guarantee safety from a monster taller than you are? But primarily, I wonder how someone can make a tower defense game and then not add a fast forward button. Adding the ability to speed through the tedious bits should be a requirement for a defense game.

All this means that, while enjoyable, Undead City feels a bit like it's trying to get by more on the strength of its ghoulishly adorable design rather than the gameplay. Or maybe it just wasn't thought all the way through. (Hey, I understand, I get excited about bloody mayhem too.) While it has some good ideas, they're not as fleshed out as they need to be. Still, it's not particularly difficult, is fun while it lasts, and the art really is a joy to behold. Hopefully the developers take the time to expand their concepts a bit more when they inevitably make Undead City 2: Dead Serious starring Steven Seagal, Simon Pegg, and Janeane Garofalo. Unless that's already a fanfic somewhere. (If it isn't, it soon will be. *type type type type*)

Game won't move on past police and bank level.
Needs to give the player more information about the towers/units such as range and firing speed, especially when we upgrade. Upgrading only to find my range has decreased is quite frustrating.
In addition, unit placement has strange constraints.

there's way too little information on the towers. and its infuriating how the bullet speed is slow enough that you cant hit certain enemies. the whole thing seems poorly designed

Anyone know how to get past the level where the zombies come at you from the top and bottom? I can't get past it...