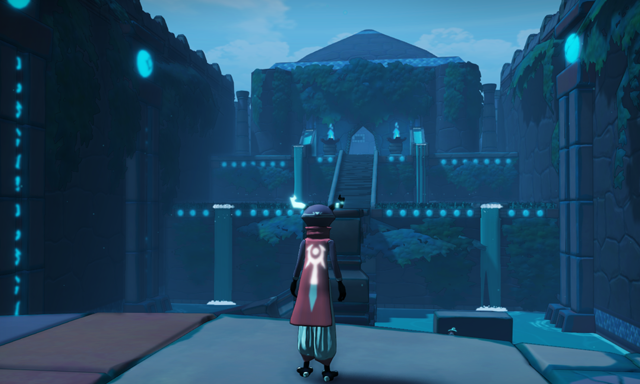 If a picture can be worth a thousand words, the graphics and charm highlighted in Unaligned may well be worth a million. Built with a custom graphics engine, a team for the Videogame Creation Master of the Barcelona School of Management put together a thrilling adventure where action carries the day more than dialogue. Your faithful companion by your side, you leap through vividly colored areas and solve puzzles, each becoming more intricate than the last and building on previous mechanics. In the end your guide is to escape the mysterious temple in which you wake, with no particular rhyme or reason other than being trapped... "again."

Though I personally would have enjoyed a bit more backstory, Unaligned throws you straight in, with a companion representing something somewhat similar to the silhouette of a Golden Snitch from Harry Potter beside you. "Hurry," you're urged on, to run through the temple and escape before something bad befalls you. As you take your first steps, you approach a dark sphere that your friend tells you contains one of your powers. Approaching it uncertainly, you hesitantly interact with it and regain one of your old abilities.

This first thing provides a way for you to move between worlds. Aside from the ordinary, everyday world which is bright with the sun shining and all that, there is a second, "dark" world that you can enter. Spending time in the dark world unlocks different secrets, and will allow you to do different things - such as double-jump once it is acquired. However, it comes at a cost, as spending time in the dark world saps your life energy. Spend too long in there and you will be forced back into the regular world and have to wait for yourself to regenerate before making another trip there. It won't be a complete shock, however, as you have a couple of indicators to cue you into when this transition back is to occur. You have a cape of sorts on your back, and the design becomes a brighter shade of red partway up your cape, a measure of how much energy you have remaining. There's also a "heartbeat" type sound that you will hear when you reach a small fraction of your energy remaining, which will carry on until it depletes to zero. These two worlds are superimposed directly on top of each other, so you will recognize some common features between them, as well as other features that become completely different under the transformation.

In addition to these abilities, you also gain the power to manipulate foliage. When you try it out, you'll see that you can make plants grow in such a fashion that Jack's beanstalk appears a runt by comparison. This is accompanied by an ominous warning that this particular ability make work differently in the dark world. What might happen if it's used there? I'll just have to "leaf" it for you to discover!

Unaligned will show you a unique approach to fast-and-loose worldbuilding, which accomplishes an interesting feat in both leaving plenty open to interpretation to the player, but also giving a fairly solid picture (both literally and figuratively) of the world(s) around you. Although there is nothing particularly groundbreaking or vividly original in the particular elements beyond jumping between the two worlds - which are that of a fairly straightforward platformer - the manner in which the engine and graphics come together is amazingly well done. Unaligned also possesses a bit of a metroidvania aspect to it, as you'll find yourself tracing over elements and rooms that you've been through before, yet doing slightly different things, making use of your enhanced and slowly growing pool of abilities to accomplish things and explore paths that were not previously available to you.

It's certainly hard to find flaw with the graphics, especially the juxtaposition of the three-dimensional world and some of the "flatter" projections on different walls/flat surfaces in the world. There is an excellent mesh of the fabric between the two worlds and connection the underlying danger of the dark world (or "dark side", if you will). At first the game starts off simple, without much in the way of time pressure or other aspects to try and hurry you, but later on, the difficulty steepens a bit. It almost seems as if the temple springs to life in an effort to block its prisoner from an escape. It will all lead up to the ultimate question: are both of these worlds still safe for you to explore?

One small thing which I feel could be improved in the project is incorporating a save feature into the game. There are a number of checkpoints throughout, so that should you die (and you most likely will, as you would in any decent platformer!), you don't have to restart from the very beginning. However, you will have to finish the game in one sitting, or go through the introduction again. Since nothing is too complicated, it shouldn't be too taxing to figure it out a second (or third) time as I did.

Unaligned's controls are fairly straightforward and easy to navigate. You use [WASD] to move forward or backward, or turn left or right in the three-dimensional world. To jump, and later on when unlocked, double-jump, use [Space]. In order to regain your powers, you'll have to interact with spheres at various parts of the temple by pressing [E]. This is also used to interact with various other objects throughout the game. Jumping between worlds can be controlled using the right mouse button, though as outlined above, you'll have a limited amount of time to spend in the other world. Perhaps most importantly, you can control the camera with mouse movement. A few other options, as well as detailed controls and support for controllers, are offered in the options screen, accessible from both the main menu and in-game if you press escape to pause.

So go ahead and delve right into the magical dual world of Unaligned and help your mystery friend on his escape attempt. Personally, I can say I'm already hoping for a sequel or another project from this obviously talented team.