From Munsie Games comes an impressive collection of mobile arcade games packaged together in one robust release: Twitch Arcade! Featuring a dozen games for the price of a single app, Twitch Arcade has everything from avoidance games to puzzle, defense, and shooting games, all playable from a single interface with easy to learn controls. No matter when you buy this tablet-optimized app, you get every new game added in future updates for free. And what better feeling is there than getting tons of games for one tiny price? 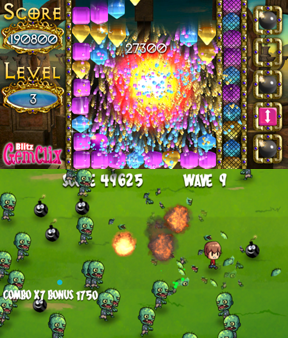 Every game in this fun little bundle requires just your finger and the touch screen, tapping targets to attack, or just swiping, dragging, and pressing the device in a mad quest for a high score. Each of the twelve games has its own simple set of rules, but they're all easy enough so you can jump right in without a lengthy tutorial. Games like GemClix Blitz is hybrid puzzle mix of Bejeweled and Tetris where you tap a consecutive set of same-colored gems that fall from the top of the screen while utilizing bombs and other power-ups. Another fun game, Ballies, puts you as a single 'ballie' that must bump into other ballies that are the same color as the background. As the background changes and enemy ballies surround you, avoid the wrong colored ballies, double tap for bombs, and grab the power-ups to rack up more points.

To bring some shooting excitement into the mix, Mator Command takes a page from the classic Missile Command to get you squashing invading tomatoes with your rocket ships' blaster cannons. When you are tired of space tomatoes, Kid-N-Zombies brings you back down to Earth to tap zombies out of existence so your kid can make his way across the screen. Whether you are a child or pretty experienced casual gaming adult, the bundle doesn't fail to impress any demographic. The main appeal, apart from the inherent charm of having this many games in your hands, is the online high score board for each game. The need to outshine your old score or prove that user 'mike' isn't such a hot shot at MatorCommand is enough incentive for most people to keep playing.

While some of these casual titles can become stale with repetitive play by themselves, a grouping of these arcade games helps to break the monotony with multiple options of easy fun. Without any convoluted game mechanics or insane time commitments, this app is perfect for kids, but in no way restricts it to a younger audience only. Any penny pinching gamer looking for mindless fun and loads of free time shouldn't pass up on this deal.

NOTE: This game was played and reviewed on a NOOK Color Tablet. Game was available in the North American market at the time of publication, but may not be available in other territories. Please see individual app market pages for purchasing info.