Bushes and huts, grass and trees, churches and gravestones, and bears. Dangerous, dangerous bears. Triple Town from Spry Fox (yep, the SteamBirds team) is the kind of mobile game you'll love to carry around with you at all times, firing it up for a few quick rounds and putting it away when you're satisfied with your progress. It combines city building with a good ole match-3 puzzle game in a manner you're probably not used to seeing, allowing you to work with individual elements to build a great empire, one match at a time. 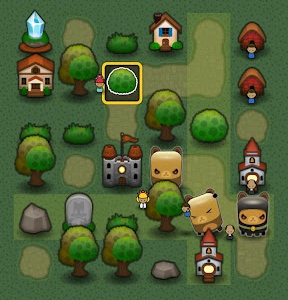 Triple Town works thusly: tap the grid to place the set piece you're handed at the beginning of each turn. By placing three or more pieces next to each other, they combine and form a new piece, something more complex and ostensibly better. Tufts of grass morph into bushes, bushes into trees, trees into huts, and so on. You can even set up combos by forming a new item with a match that, in turn, settles into yet another match with pre-transformed pieces nearby. Your goal is to create the most advanced grid town you can, all by making matches and chains with these unassuming little tiles.

Oh, and then there's the stuff that gets in the way. Namely, bears. Bears appear just like other set pieces, but instead of building more complex/cool things, they just take up space. By blocking them in, however, they transform into gravestones. Three gravestones morph into a church, three churches to a cathedral, so bears aren't just a nuisance, they can be made useful like everything else in the game. Just wait until you get the wild card crystals, bots and ninja bears, then the fun really begins!

Moves in Triple Town require strategy, otherwise you'll be staring at a frustratingly full grid that will end before you get to anything really entertaining. The game does feature an in-app purchasing system, allowing you to spend real money for in-game items as well as additional turns. You're given a generous amount of coins to spend the first time you play, and since you have hundreds of turns, there's no real pressure to pay until the game gets you irrevocably hooked. Which it just might, as Triple Town is a volatile mix of short-term strategy, long term success, and instant gratification rolled into a neat, visually adorable package!

NOTE: This game was played and reviewed on an iPod Touch. Game was available in the North American market at the time of publication, but may not be available in other territories. Please see individual app market pages for purchasing info.

Finally signed up just to comment on this one.

First, it's so much more than a Match-3 game. It's more strategy with a strong element of randomness. I giggle whenever those evil (snuggly) bears are trapped and turned into headstones. And it is truly playable without paying money.