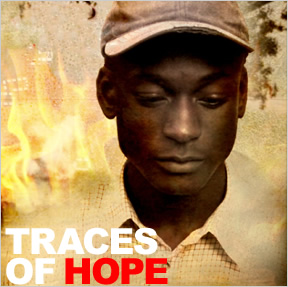 Games are usually thought of as diversions, entertainment, distractions to get through times of boredom or simply to experience pure enjoyment. They can also, however, be a persuasive medium through which to convey important ideas; more and more, various organizations and other entities are recognizing the power inherent in games and utilizing them to spread their messages to a larger population.

Alternate Reality Games, or ARGs, are an especially effective genre to this end. By creating an interactive narrative rife with puzzles, intriguing characters and dramatic storylines, ARGs draw players in to an extent not possible for most other types of games. Microsoft, Steven Spielberg and countless video games and movies have all produced alternate reality games; now, from the British Red Cross, comes Traces of Hope, one of the first-ever charity ARGs!*

Traces of Hope centers around 16-year-old Joseph; survivor of a vicious civil war in Uganda, he was wrenched from his family and forced to flee his home. Now, five years later, Joseph is on a dangerous quest to locate his mother. With the help of a British journalist, the young refugee has access to a satellite phone with which he can contact players; this is where you come in. Can you guide Joseph through the perils of a war-torn civilization to maybe, just maybe, locate the Red Cross messenger who can provide the information he so desperately desires?

Created by Enable Interactive, the game promises to combine "storytelling, detective work, technology and treasure-hunt style gameplay in a compelling 21st century narrative, as players seek to reunite Joseph with his mother." I can't provide many details, as the nature of an ARG is to be constantly unfolding; however, I think that Traces of Hope has the potential to be both fun and profoundly moving, an unusual combination indeed. Compelling story + entertaining gameplay + important real-world info = one heckuva good thing.

Registration opened about a week ago, so jump in now to avoid missing the boat! You can also see a teaser video for the campaign, and, if you like, post your thoughts and findings here in the comments for others in the JIG community.

Also, if you enjoy games with a cause, make sure to check out the new and improved Free Rice! A year after its debut, the United Nations World Food Program-developed vocabulary game has expanded to include subjects such as geography, art, grammar and chemistry; as before, every correct answer for any subject donates 20 grains of rice to the UN (the rice is paid for by the game's sponsors). Over 45 billion grains have been donated so far; let's add to that number. :)

*Note: We had originally written that Traces of Hope was the "first-ever" charity ARG, but we want to set the record straight: Operation: Sleeper Cell (in aid of Cancer Research UK) launched slightly earlier than this one did.

Well it looks great. I just can't wait for the email.

Don't hold your breath on that email. It never comes x_x

Sorry, Anna, which email are you referring to? I've already received one from Traces of Hope.

argh so i have to do the game by email?
its a good thing i used my old email address.

http://www.operationsleepercell.com/ also started up in the past few days. It's a cancer research benefit.

Often it takes a little while to initially receive contact from an ARG; it isn't always like a normal game registration where they send an automatic email. Also, you might want to check out the forums at unfiction.com, one of the biggest ARG sites out there:

That's great Andrew, thanks for bringing it to our attention!

Signed in yesterday after reading this, have yet to receive my email.

Jess mentioned to me that it took a couple days for her email to come through.

I signed up with two emails just in case. Sometimes Yahoo doesn't work. Been 24 hours now, still waiting to be activated.

Awesome, a new ARG! I can't do them for my life, but whenever I get that obligatory "call this number", well, it just gets so cool!

Three days, still no email. They must not want too many people playing this game...

It took a couple of days for me, too, but the email DID come.

Be careful, or you (or your email client) might think the email is spam.

In case you're unsure and want to know what the first email might contain, here's a copy of the one I received...

Okay, I got my first email a few minutes ago, but from reading blogs about the game it would appear that it is the second email I Was to receive (also,I read about a video that may have been sent by email that I didn't receive either). There is nothing in my spam folder, but luckily people have posted the first email online.

Now to figure out what the heck it all means...

How about providing some information that you've learned here in the comments?

Was the email I posted *not* the first one? Do you have a link to the video you can post?

What more are we missing?

Sorry Jay, I didn't see that you posted the email! The one you posted is the first one that I got, but apparently a lot of people got one before that, reading:

Hello how are you? My name is Joseph, I am in Northern Uganda…I am hitching a ride with this British journalist called Alan Hackston and he has finally let me use his sat. phone. Actually he is asleep! Ha ha. I am on my way to Hopetown now... See ya J.

Since the first email gives you "Alan's" full name, you can use it to find out more about what's going on. So far I have found Alan's blog, Flickr account and Linkedin profile, and the website for his phone, amongst other things.

I found the original email, plus a video from Joseph that may or may not have been emailed to other players, at a guy's blog (he is writing about the game as he plays through it).

I finally got the email but it makes no sense. Something about a sat phone, I didn't get that introduction one mentioned above. This sounds like it's going to be a lot like search4e.org so I'm not gonna play it. I thought it was going to be an actual game I could go somewhere to play.

For anyone interested I did find this map posted by Joseph or the Alan guy.

I'm getting a 403 Forbidden error when I try to access the game. Any insights?

If you haven't found it

Alan's blog can be found here

I am actually feeling pretty intrigued, this is my first ARG

I'm having issues finding the website for his phone! Help please!

I have helped him with the phone --

tell him to push the yellow button for GPS information

and then he asks you to help with a woman -- which I think is easy but he hasn't gotten back to me yet. This is my first time playing one of these games. Has anyone gotten past this point

After I receive the satellite image from the phone, it says that his phone is turned off. Do I just wait until he turns it back on? Because he hasn't told me anything for my next "mission".

Hey, I've been trying to tell Joseph to

Is it because it's too late or something?

I cant seem to find anything on the fever/vomiting lady. Can anyone assist?