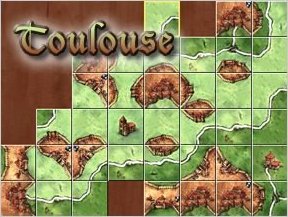 "The southern French city of Carcassonne was founded on an important trade route between the Mediterranean and the Atlantic. Because of its strategic location, the city was often conquered... As a result of this varied history, the city is famous for its unique mixture of Roman and Medieval fortifications."

This is the unassuming introduction to the popular board game Carcassonne, which is something like a cross between Settlers of Catan and dominos, and can now be played online for free as a Java version called Toulouse, at AsoBrain.com. Toulouse is played with three to five human or computer players, and a well designed interface and beautiful presentation make this web-based version user friendly and highly enjoyable. The folks at AsoBrain.com have also recently added the option of playing with up to two expansions to the original board game, making this as involved a Carcassonne experience as you could hope for.

UPDATE: It appears the game is no longer playable since the site is no longer taking registrations. Previously tagged as: asobrain, board, browser, classic, free, game, java, macwinlinux, multiplayer, rating-y, strategy, turnbased.

The game board is composed of square tiles. When the game begins, a single starting tile is set in the center of the field of play, and play progresses with players taking turns. On a player's turn, the computer draws one tile at random from the remaining stock of tiles and displays it in the upper-left of the screen. There are four different types of city structures depicted on the tiles: pastures (green), cities, roads, and monasteries. When you place a tile, the edges have to match up with the edges of every other tile it touches: pasture to pasture, city to city, and road to road. (Monasteries sit in the middle of a pasture, and so aren't matched up to anything.) The tile may be rotated and placed anywhere you want that it fits on the board so far: Left-click the tile to pick it up, right-click to rotate, and then left-click again to place the tile. In this way, the players build the board as the game progresses, and every game produces a new, unique board.

With the basic game, each player is given a stock of seven followers that are invested in different features in order to score points throughout the game. On every turn, after you place your tile, you may choose to invest one of your followers by placing it on a feature, but only on the tile that you just played. Left-click the follower in your stock at the top of the screen to select, and left-click again on the desired portion of your tile to place. A follower in a pasture becomes a farmer, on a city is a knight, on a road is a robber, and in monastery is a monk. If a feature on the tile is part of a bigger feature that is already occupied, then you cannot play in that part of your tile. So, for example, if you place a tile with a city piece that joins on that edge to an in-progress city in which any player already has a knight, then you can't play one of your followers as a knight in that part of your tile. However, you can play the tile close by and place a knight, and hope to join the two cities into one large city with another tile on a later turn.

When a city is fully enclosed on any player's turn, the player(s) with a knight in that city scores 2 points per tile and per bonus shield icon in that city. The exception is cities that are only two tiles large, which only score 2 points. When both end of a road are capped by a junction or a city wall, the player(s) with a thief on that road scores 1 point for every tile in the road. And when a monastery is surrounded on all sides and corners, the player with a monk there scores 9 points (one point for the monastery tile, and one point every tile surrounding it). If two players share a city or road, they both score the full points, and if one player has more followers on a city or road, then that player trumps the other and is the only one to score. When a feature is scored, followers are returned to players' stocks to be reinvested. Also, when you place a tile that completes one of these features but hasn't yet been occupied, then you can place a follower, score, and immediately retrieve that follower.

The final feature, pastures, score a little differently: A follower invested as a farmer stays until the end of the game. Then, a farmer can potentially score for every finished city, regardless of size, that is touching the farmer's pasture. Farming rights go to the player who has the most farmers in pasture(s) touching a city, and for every such city a player scores 4 points. The game is played with between 70 and 112 tiles, depending on which expansion sets were selected, and play continues until every tile has been played. Partial points are awarded for unfinished cities, roads and monasteries. After scoring these and farmers, the player with highest score wins. A more detailed description of the rules of the basic game and the two expansion, complete with illustrations, can be found here.

Analysis: Besides being a very fun game, Toulouse offers excellent execution. The tiles for the original game were scanned in to create the graphics for the online version, and the presentation is very professional. Dragging the cursor over a given feature anywhere on the board highlights its entire scope on the board so far, and displays its current point-value and owner(s) (if any) in the lower-left of the screen. As the size of the board increases, the camera pulls back so that all the board is on the screen at any one time. Sound effects are minimal, but not annoying, and can be muted.

A few things to be aware of: Free registration is necessary in order to play, but this only requires a username and password (no email address required). Also, because Toulouse is Java-base, somewhat graphics intensive, and because AsoBrain.com also hosts Java versions of Settlers along with two other games, play can be a little slow when there is heavy traffic on the server. Finally, be careful to place tiles and followers where you intend; placement is permanent and there is no undo feature. Overall, though, the folks at AsoBrain.com have done a terrific job in putting this very fun board game on the web. Click.

I was able to log-on and play a complete game using your instructions only. The implementation is excellent. Play went smoothly with just a couple of slow periods when the board was being resized. Thank you so much for introducing me to the game, and for your wonderful contribution to the site! =)

Is it our first female, or is another male joining the flock?

I am an addict to the original boardgame and now I like this version. The explanations is very well done, my compliments!

I should like to play this game but I'm getting Java errors: java.lang.ClassnotfoundException: java.lang.comparable

anyone know what might be the cause of this?

Carcassonne is such a good place. I'm glad I enjoy this game too.

My only thought is that maybe the server is really busy when you get that message? (Or maybe you need a stronger signal if you're wireless.)

'Class not found' errors can be caused by having a prior version of Java installed than the one the application was built with. But java.lang.comparable has been included with Java installs since v1.2.

You might try reinstalling Java. That's the only thing I can think of to try at this point.

Yes, you'll have to get the latest version of Java available from here.

This game is awesome - I'm addicted again! Thanks for great recommendation.

Jay, it appears the links are outdated - when clicking on them, we're asked to update the links. I'm looking for the proper link now...

Thank you for a clear, concise guide to this game. I had no idea what I was doing when I tried to play, and no idea what game it was based on.

I think that you are leaving out the scoring on products such as barrels/what/cloth is what I mean.

are you? I'm getting better but yeah,

and thanks, that rocked

Thanks heaps for that review. I have been playing for a while and only found your review when I finally bit the bullet and searched for rules! lol.

[Edit: Glad you found us! Welcome to JIG! -Pam]

AsoBrain.com is no longer accepting new registrations... Please update this article if you find other places to play online?

It's now December 2010, and the global registration block is still in effect. Is it time to make this link inactive?

Good news everyone! Asobrain has reopened registration. They have implemented a waiting period (1 - 2 weeks) but you can get back on again!!!

Thanks for the details about how to play this game. I have seen it on the site, but never played it before since I didn't know how.