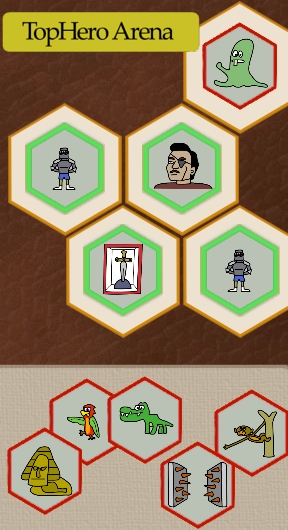 When you consider a typical, classic, medieval-type fantasy world, it sometimes seems that it must be so chockablock with heroes and adventurers, that you have to marvel there are any adventures left to be had. What do heroes do when the last dragon is slain, the last dark tyrant vanquished, the last evil artifact destroyed? They could all either weep, for there are no more worlds to conquer, like that wimp Alexander; or they could mass-market their adventuring skills for the entertainment of the teeming masses. Top Hero Arena, by Dave Campbell, seems to imagine such a world, where a decadent peace leads unmoored adventurers to compete to escape elaborate dungeons full of kooky monsters and devilish traps. And you get to build the dungeon! The dungeon master, to coin a phrase! Huzzah!

Each level involves a particular hero, a particular hex-grid dungeon map, and a particular selection of critters and contraptions, each with their own powers and attributes. It's your job to arrange these elements into a fearsome gauntlet, so that the hero cannot survive before making it to the exit. Simply click and drag monsters and traps into place. Dragging a tile to an occupied space will cause the two to switch places. Hovering over a tile will give a description of what it does, and you will perceive that some sets of tiles work best when the hero is forced to encounter them in a certain order. Damage to the hero affects his armor first, then health, and he may have a chance to replenish both. Crush the upstart before he gets a chance!

The first two levels that are unlocked are fairly simple and will give you the chance to test various strategies. Subsequent levels escalate in difficulty very quickly, so be prepared to yell at your screen by the last couple of levels. There are only eight levels, and the graphics are crude, hand-drawn specimens, but the puzzles provide a worthy challenge if you have a moment in your day. Plus you will have a chance to put those vainglorious heroes in their place. So fire up your brain, dungeon master. The crowds demand spectacle!

This game seems to freeze easily.

Wasn't there an IF that was based in a concept something like this? I can't remember what it was called, though.

@Idran
I got reminded of that as well.
I believe it's called Lock and Key.

This is a good (but frustrating :)) game.
I've only solved one level so far, those heroes are impressively smart.

Yeah, Lock & Key by Adam Cadre. I haven't even played this version yet, but if it's anything like Cadre's masterpiece then I'm already in love.

can't play game. Keeps freezing when I select a hero

[When reporting a problem such as this, please include your OS/browser/flash player versions. Thank you! -Jay]

any hints on the last puzzle?

I am apparently too stupid to work any of these except for the first one out.

Some of these have no solution. I am dissapoint.

Any help for Bruce or Iacta? I am kinda dying over here.

Is there any way to mute the sound?

Very fun, the bodies of my foes lie before me, only Jan yet remains.

Yeah, this game freezes for me before I can even start it. I'm using Google Chrome. Anyone else??

most of the things require him to be confused

there are two ways to confuse him

one will hurt him if he's already confused

also, him healing his armour is a problem

so you need to hurt him 1 when he can heal

there are two paths can take

if one is safe, he will take it

so they both need to be lethal

the armour is a problem

you either need it to be irelavant,
or do enough damage to punch through

For the life of me can't figure out Jan (last one)

I should have mentioned earlier I'm using Chrome 5.0.375.17 dev, and the game freezes often, especially when trying to select a hero.

Seems Chrome and Opera both have a problem with this game. Try a different browser. Works fine in Firefox and Safari, from what I can tell.

I have solved all but Jan. (wish I had taken screenshots/notes; I figured a walkthrough would be up already).

I think that I have probably tried all logical combinations, and am probably missing something in my logic, can anyone see any flaws?

The first square is important - the hero will never have to step on it twice. Therefore it is pointless to put the bird on the second square, and in any combination such as dragon/lion for the first two squares, the better piece should go *second*. The exception seems to be when fire is involved, since fire cannot be refreshed it might as well be first if it's going to be first or second. Also, it would be pointless to put the lion, fish, or bird in the first square.

That would, if correct, mean the first square is either fire, dragon or croc (and if croc is first, what's second that's less useful??)

Putting the bird in the last square is pointless.

Putting the fish before the lion is pointless unless you can force the hero to step on the lion and bird and then retrace his steps to the fish. (I think the key may be here somewhere).

If the hero has already activated the bird, then the sequence of the last two pieces must either be lion/fish or the harder hitter first, so that the hero won't have enough hitpoints to take the lesser hit and go back to be healed.

Uh, that's it for now. Unfortunately I lost my list of tried sequences on a computer hang-up, but I'm sure I'll be back to try again.

I can confirm it seems to work better in MozillaDeveloperPreview/3.7a3 (i.e., in Firefox).

Victory!
These solutions aren't exhaustive, variations of them should work as well.

You can't stop him from getting that armor.
Solution:

Make him choose between dying before the armor or being confused and getting to the armor.

With at most 4 health and 2 armor, Tor can't walk past both the Giant Glak and the Lion in succession without healing.

Cygan's maximum health is 3 without armor. If you can make sure he has no armor by the time he reaches the fork in the road, you can do 3+ damage on each road option.

Solution(left to right then 2 forks)

first ring (above menelik) -> water
then:

(across from menelik on the first ring) crushing walls

(below menelik on the first ring)
sphinx followed by

(next to the wall) creepy tooth

wall then the armor

followed by donut at the end.

Michal would REALLY like that sword... make it not worth his time. It's also worth noting that he only has one hit point despite his 3 armor.

Keep him from getting much benefit from those heals. You may only need to see the first two squares of the solution to get the whole thing.

@Parmeisan-
Your logic's exactly what mine was, and exactly why that level took me a while.

Examine your first premise in light of how the hero tends to behave when you run him through dungeons. Just because he won't step on it often doesn't mean we can't make it useful. How many ways can he get to that armor?

Also a point to make, in case it's not clear how the heroes are moving or making decisions.

The hero knows from the moment you set him on the path if there is a solution to your dungeon or not. For choice-based hexes, he will decide the optimal path given the entire dungeon. He won't take an option that will lead to him dying unless all choices lead to him dying.

This means that choice hexes are not actually choices so much as path splitters. you have to consider the case where the hero takes choice A OR choice B because he will do either one depending on which you ignore. Many of the early puzzles are about making choices a and b equivalent by combining hexes...

What this game needs is an "Abort" button for when you realize there's an error in your solution. That, and a mute button. Otherwise, it's quite an excellent little puzzle game.

These heroes are impressively clever. Michal deliberately let himself get injured by the sphinx in order to pick up the emergency sword, since he otherwise would have lost the sword and not had enough armor to survive without it.

Unfortunately, this intelligence takes a lot of processing power. The game would apparently freeze almost every hex, though moving the mouse made it update the screen. Plus, the hero moved slowly. Presumably he's not planning his route while he's moving between hexes, so it shouldn't take that much work to move him, unless it's terribly coded. Plus, there's no abort button so I have to watch Michal do his agonizingly slow back-and-forth march across the length of the dungeon each time I try something.

It might be more tolerable if you had the hero do all his calculating beforehand to find the optimal path, instead of making him recalculate his path every time he moves. It's not like the dungeon will change once he's started!

No way to mute the game?

If you wish to play the game without the background music:
https://jayisgames.com/games/top-hero-arena/

I didn't have any problem with the heros movement between hexes.

Hints for Jan (that don't spell out the answer):

Jan can either get to the armor by healing, or by going through the first space again.

Between the bird and the glak, you can force him to do waste one of his heals.

This is a really great game! I would love to see the idea expanded upon; these are the sort of puzzles that I wouldn't get sick of very quickly.

Finished, at last!
Jan was so hard to beat, I tried everything that seemed logical to the point where I started to wonder if there was really a solution. I'm glad I didn't give up!

It would be cool if you had "Save" button, so that I could return to the hero that I haven't sold without having to go through all the previous levels.

Or some kind of "level skipping codes" perhaps.

It's a great game, thanks!

I really liked the game, smart and hard :)

For the developper:
As already pointed out by other players, a mute button and an abort or fast forward button would improve the gameplay quite a lot and make Top Hero Arena a great game. Also, I was sometimes disappointed because on my computer it runs quite slowly; if it really recalculate the best path every time you should consider precalculate all of them. But it's fun, thank you!