TNNS is a wild arcade game from Action Button Entertainment and Rabbx that plays like a cross between Breakout and Pong, only about a billion times better (rough estimate). Imagine using a rubber paddle to smack a rubber ball around a stage filled with blocks, stars and arrows, then using some sort of telekinetic powers to make the ball curve a bit. That's TNNS, and if you're not laughing with amazement each time you fail/succeed, you're probably doing it wrong. 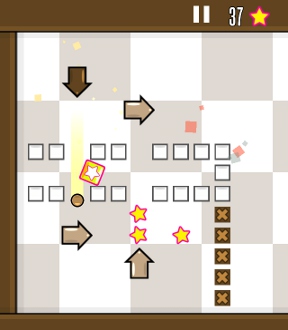 Here's TNNS in four words: don't lose the ball. Whatever happens, keep it bouncing, even if you have to sneeze or someone is stealing your shoes. By sliding the paddle across the side of the screen, you can bounce the ball back into the field, the goal being to gather stars and eventually hit the exit to move on to a new level. Unlike similar arcade games, you get to have a tiny bit of control in TNNS. When the ball is about to hit the paddle, give it a little slide to perform a curve shot. Yeah, ok, it's not that much control, but it helps you feel like you're doing something constructive instead of just playing rescue.

Much like Jetpack Joyride and its ilk, TNNS is extraordinarily replayable and features a between-death shop where you can customize and power-up your game by spending a few of those stars you gathered. There are also goals you can meet for bonuses, such as getting a multi-ball, playing multiple levels without dying, collecting certain numbers of stars, or playing while skydiving (unverified achievement, but it's probably there). All of this adds up to a higher score which you can easily share with your friends/non-friends for bragging rights. Or, even better, force someone nearby to sit down with you and play a two player game! 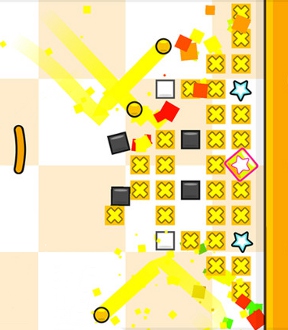 Analysis: So here's a fact: TNNS is pronounced something like "tennis", so in case someone in real life asks you about the game, you won't call it "tens" or "tunes" or "sorta Pong" and sound like a weirdo. TNNS is a speedy, sometimes frustrating, sometimes punishing arcade game that rewards you for fast reflexes and a good relationship with Lady Luck. Mastering the squishy paddle to survive more than a dozen levels will take some practice. But since there are so many pretty colors and smile-inducing things to look at, you won't mind.

Mistakes are your worst enemy in TNNS, and more often than not a slight overshoot will be what ends your game. But that's life, isn't it? A few optional in-app purchases can help curb that pain by allowing you to load up on stars and buy power-ups that give you an easier time, like a barrier to stop the ball from leaving the screen, stage skips, bigger paddles, or destructive power-ups. The store is absolutely filled with neat things to grab, and you'll be more than tempted to do so just to see what hand-crafted madness awaits you in the next level.

TNNS is just, like, the best thing ever. The marketplace description is even worth reading, that's how "the best" it is. Fast gameplay, lots of stuff to do, and you'll never see the end of the game. TNNS may not give you six pack abs like Action Button's previous game ZiGGURAT will, but since it just might win a Pulitzer Prize or two in the future, you can at least say "first!" when everybody else in the world starts playing.