Martin Foster, Andrew Gleeson, and David Fenn were thinking... you know all those incredibly difficult, anxiety-inducing boss battles in games? You know what would make them better? If you had only one hitpoint, and one single arrow you had to call back to you each time you shot it to take them down. And then, presumably, having conceived this fiendish concept for Ludum Dare 28 (theme of "You Only Get One"), they all sat back and cackled maniacally, twirling their handlebar mustaches and stroking their white supervillain-issue cats while being backlit by lightning flashes. At least, that's how it happened in my fantasy. Titan Souls (also playable here), created in just 72 hours, is the result of that devious flight of fancy, as you control a young lad armed only with a bow and single arrow trying to take down four enormous beasts who each only have one weak spot. 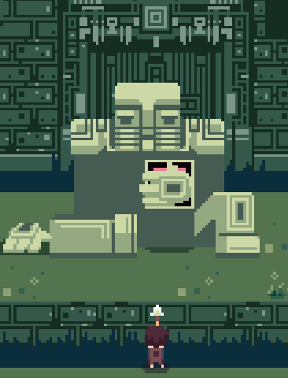 The gameplay itself is fairly straightforward. You move with the [arrow] keys, execute a very Link-like roll with [Z], and press and release [X] to fire your arrow in the direction you're facing, while holding [X] will call it back to you after, or you can simply run over it to pick it up. Each of the monsters you'll be facing has its own style of attack and its own weak point, often only vulnerable for a split second, so you'll not only need to be dodging and darting around since a single hit will knock you back to the altar clearing where you began, but also be ready to fire at a moment's notice. All it takes is one true shot... but it's far from easy.

If you're getting some Shadows of the Colossus-y vibes from the game's concept, you're not the only one. Considering its tiny development window, Titan Souls is a beautiful, beautiful game with its slowly building soundtrack and stark mysterious landscape. Apart from the temples themselves, however, the surrounding area is, well, pretty boring largely because it lacks any visual interest to make up for the tedious plod back to a temple from the starting area to try again. The beasts themselves make for a nice variety, and though I almost felt like the gameplay was something that could have been suited for a joystick and an arcade cabinet, the controls are responsive enough to make navigating the battlefield challenging without being obnoxious. In a way, the setting and concept feels more compelling than the actual gameplay, if only because the lack of storytelling and strange atmosphere keeps driving you forward to see what happens. Titan Souls feels like a part of something bigger, but what exists is still a well executed piece of artistic action that uses its theme in clever and challenging ways.

Just in case anyone needed help with the jumping boss...

Awesome game! Lots of fun, really short, great idea, and I'd love a sequel or a longer version. Very pretty and nice. I loved it.

I think the ending could have been explained a little better. I didn't know what was going on until i took a shot in the dark and ended up killing myself. I suppose this was the point, but at least more of an indication of where to shoot would be nice. But still, amazing game!

I dont understand the end :D

I kinda hate this game. :( Even if I come up with what seems like a decent strategy, I keep dying over and over and the long trek back to the boss doesn't help. This is like SMB1 hard, only there's no pattern to memorize. I'm curious to see if they'll ever come out with a non-Ludum Dare version.

I didn't really get why people said it was hard, the bosses were awesomely planned and the artstyle is quite beautiful. It's a short little nice ride to go one. 20 minutes, 30 minutes tops.

Also, I was somewhat let down by the last "Titan". I was expecting an epic battle. And instead I got a somewhat pretentious ending. I'm not bashing it. I just felt it could have been handled better.

Pretty cool game so far, but it is indeed amazingly frustrating that you have to walk to a boss ... again .... and again ... and again... especially the two further away are annoying.

Other than that, nice idea and well-executed!

The rolling/jumping boss to the left ran into my corpse (and arrow) when the screen went white and what I think is a trophy added on the left pedestal. I technically didn't kill him, but it ran into my arrow (or corpse, can't remember).

Nice little experience! The ending feels indeed a bit like

.. they weren't able to create another boss in time and thought "oh well, let's let him kill himself and let the players think about THAT one

... but hey, it was a well-created game and a nice little new idea!

Crap, sorry! I used 'topic' instead of 'spoiler' in my above message, can you please fix that Jay? I feel stupid now for not using the preview button...

A very interesting game which seemed very "Shadow of the Colossus" inspired.

Here's a thought that could possibly have accentuated the story in it's climax without changing much of anything.

If perhaps instead of the northern door and continuous gate in the final room, a mirror was placed there instead. Seeing your reflection, should you fire the arrow at it would crack the mirror. upon the 3rd or 4th strike, the mirror would shatter, finding nothing behind the mirror but a wall, the protagonist would fall to the ground, dead.

This would symbolize that after defeating these monsters, there is no greater monster than yourself. That which you destroy, becomes you.

wow..i suck at this game ahah

This is how I think the ending works

I think you are the last titan and after having rid the world of the other titans the only one left was yourself.Also the arrow must be the only thing that could kill a titan that would explain why when another titan "killed" you you'd wake back up in the middle area with your progress still intact.

in the final stage am i the last titan soul??? :O wow excellent game and good bosses