[The following is a reader review by Michael, used with permission. Want to submit your own review for a game we haven't covered? Use our submission form!]

TIS-100 is an indie puzzle game from Zachtronics, the developer of Infinifactory, Ironclad Tactics and SpaceChem. You're given a literal manual for the titular computer, a "massively parallel computer architecture comprised of non-uniformly interconnected heterogeneous nodes", and tasked with using the information gleaned from that manual to not only properly code and complete puzzles as efficiently as possible, all under a very serious guise of realism, but also potentially discovering who really built the machine, and why. Anyone who played SpaceChem will notice similarities between that game and this latest effort, as they follow the same spirit of game design. If you enjoyed SpaceChem for its brain-bendingly difficult puzzles built on abstract thinking and planning, it's likely (with one caveat) that you'll appreciate TIS-100 for the same reasons. Both games center on analyzing a problem, conceptualizing and constructing a system to transform some given inputs into a desired output, then pressing "run" and standing back to watch your system either fulfill your desires perfectly or go completely awry. Sometimes it takes several complete restarts to find the solution, but the feeling of accomplishment when you finally achieve that output can be extremely rewarding. The player must program each node individually so that they cooperate to do tasks like multiply numbers or detect maximums within a sequence. The game manual is completely in-character: a PDF of a well-used copy of the strange computer's printed instruction manual, which offers very little hand-holding for the uninitiated, instead getting right down to business describing operating parameters and detailing the game's instruction set. 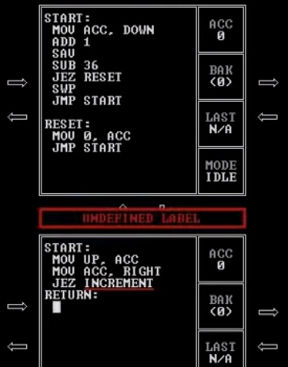 The caveat is that TIS-100, more than most games, has a pretty high bar to entry: this is a game for experienced programmers. SpaceChem was graphically rich and centered around a molecular-assembly conceit; the way the chemicals travelled around the screen was reminiscent of a factory full of conveyor belts, and successful jockeying of the atoms rewarded the player with stylized images of uranium, oxygen or hydrogen bound together into completed molecules. TIS-100, too, involves orchestrating the repetitive, synchronized shuffling of items between stations, but it throws away the graphics of its predecessor in favor of an old-school computer aesthetic. The entire game is drawn in ASCII line-art representing tessellated nodes in a mysterious computer, and the items being passed around between the nodes are just integers.

The puzzle solving is achieved by typing a kind of assembly language into each of the individual nodes, in stark black and white with an appropriately monospace font. Instead of coaxing sprites to move around on the screen, the programmer of the TIS-100 must visualize pointers jumping between instructions and numbers flowing in and out of registers. Completing a puzzle (a specification) means matching a set of inputs to the right outputs, and rewards the player by marking that specification "nominal" and ranking the solution among those of other players in terms of instructions, nodes and execution cycles used. I usually found myself revisiting a solution to see if I could tighten it up, using fewer jumps or shaving off a couple of cycles. If that kind of thing appeals to you, you'll be right at home here. The programming is very low-level. If you're a user of modern-day programming languages with names evocative of coffee or jewelry, you might--like I did--find this language frustratingly limited. But you'll probably enjoy the stretching sensations those limitations cause in your brain...especially during the moments when you finally see your program shuffle all its registers in complete synchronicity and reward you with success.

TIS-100 also features a sandbox mode, and a gradually unfolding storyline involving messages left by a dead uncle detailing his love of technology, and his musings on the mysterious (and possibly top-secret?) origins of the computer he discovered. And, in keeping with its pedigree as a true programmer's game, it also comes with a level editor of sorts: the "specification editor", which delegates to the external text editor of your choice to let you create your own puzzles, if you are so inclined and have a working knowledge of Lua. If you have an aversion to memorizing keywords and typing cryptic instructions into a computer in order to make it perform operations, or if you prefer your games full of action and color, this may not be the game for you. But if you programmed a computer in the 1980s (back when the pixels were chunky and the programming was BASIC), or if a white cursor blinking attentively on a black screen fills you with feelings of exciting possibility, you should definitely give TIS-100 a try.

Honestly, I am loving this game. I read through the manual and I love how there is no hand holding at all. While the instructions may seem really cryptic, when you actually start trying to implement solutions, it's not nearly as bad as you might think. It resembles assembly programming, but the instruction set is really stripped down and it's more like an assembly version of Jahooma's logic box (which I also loved and rave about). 5 stars.

LogicBox has a new version now. A couple months ago it was expanded as a game with its own domain and a lot of new features.