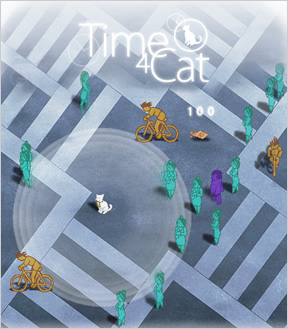 If you have ever had a cat, you surely asked yourself at some point "How did the cat suddenly appear there?" Well this game may explain it, as you play a cat who has control over space and time!

Time 4 Cat is a new mouse avoidance game, by Megadev, in which your movements also control the enemy, so you can make everyone stop and start, or go faster or slower. Your goal is to hustle through the big city and scoop up all the food that is dropped. Each piece of food has a count-down timer on it, the faster you collect the food the higher your score. There is an occasional white sphere for a bonus power up, which gives you control over the immediate crowd by left clicking the mouse, allowing you to push all the people out of the way with a force field. Each sphere collected is single use and you can only keep three at time. The obstacles become more daunting as the density of people increase and there are bicyclists to contend with. Adding an extra dimension to the problem are shadows of passing clouds obscuring your view a bit, and eventually the people start to materialize and dematerialize creating quite a challenge.

Analysis: This game is elegant. The art work is simple and hip. The music adds to the enjoyment of the game — it starts out as ambient music then begins to syncopate and subtly build over the course of the game, adding some tension when things escalate. There are some nice sound effects thrown in; if you listen close you can hear the cat purring when it catches the food. But you don't want to hear the cat meow when it runs into a pedestrian, as that ends the game.

The game is easy to play in a short time frame, and fun to replay and try for the highest score by concentrating on speed, or slowing down for accuracy. You could even cha cha cha to the beat. Unlike most mouse avoider games, where it can get so frantic that you can barely see what you're doing, the thing that makes this game stand out is the fact that you can slow everything down and go at your own pace. It remains challenging while being relaxing.

Thanks to Spector17 for sending this one in!

Now this is something I've never seen before: the page has opened, loaded and the loading bar is still showing, but there is a lock next to it. Nothing I do makes the game open. Ideas?

[Edit: The lock is just a Mochi-ads symbol. The game loads fine for me, though it does take some time initially. Perhaps disable your ad blocker? They often conflict with games with ads in front of them. -Jay]

Awesome game. I played it yesterday on Newgrounds and was thinking about suggesting it here. 18156 is my high score so far.

Hey, if you move really fast, you go into a matrix-like screen and the game goes by MUCH quicker.

Wait, it's not really, fast, it's just if you're off screen.

I don't see how this is possible without some sort of cheat or hack. I don't particularly care about high scores, but this is not the first time I've seen suspect-looking scores in an online game like this. Has anybody else noticed this phenomenon? Is cheating involved, or do people in Slovenia (or wherever) really spend 6 hours playing a game like this and scoring ridiculous points?

[Edit: Times listed in high score tables generally indicate how long ago the score was posted to the table, not the duration of play. -Jay]

Hi! To the comment above, our apologies for those high scores, they have been discovered to be cheaters so we have banned them now. Everything should be in order.

Thank you for the glowing review of our game! It is nice to know that people enjoy our games and we appreciate positive feedback wherever we can receive it. :)

There's a video ad that comes up that you have to watch to play the game. I paused it when it came up and got the same "lock" icon until i unpaused the ad and let it play through.

122,230 in 6 minutes on my first run. A nice twist on the mouse avoidance game genre... "the thinking man (or woman)'s avoidance game," I guess you could call it.

i usually hate mouse avoiders, but the idea that you can slow down your obstacles by slowing down the mouse is really cool. still though, it's only worth playing once.

Had the same problem as the first poster. Link from the pic of the game did not work, but the lower text link did let me play fine.

[Edit: Generally, image links on JIG use Javascript to pop-up a new window for convenience. If you have pop-ups blocked for us, then it won't work (obviously). You can set your browser to allow them for us with confidence, however, since you will never get a pop-up ad here, ever. -Jay]

I'm really impressed - I'm never the sort to get over-enthusiastic about a game, but this one captured my imagination, and it's really easy to get to grips with. I've had a few problems with it freezing up after the cat get stepped on though, but I still love the game.

This game rules!
Megadev should get more publicity - those crazy guys can create winners quickly (much better than spending years on one game, for example)
Very simple - what I love about it is that it plays on how we all use windows. It is as brain-mesmerising as solitaire and totally absorbing.

I've tried logging into the game, but it keeps crashing at the title screen. I'm running Firefox 3.0.10, with the NoScript add-on (which hasn't caused similar problems before). I have cable internet (6MBs), so speed should not be a problem.
I get through the ad, the title screen starts up, and Firefox promptly crashes. This has been a repeat occurrence which goes away when I close the window for the game.
Any thoughts/ideas?
Anyone else having similar problems?
TIA!

korsair: It might be an adblocker issue. Try disabling if you have one.

Time 4 Cat is my favorite game and the guy with a score of two billion is Canadian not Slovien or whatever that dude said. If you look under month, I'm ranking twelve. I'm really good at mouse avoiders and my highest score is 130,000 something. I don't know, I can't remember the other numbers so I used zeros instead. Also for today and for the week, I' ranking 2. I wonder how hard it was to make the graphics for that game though because there is a LOT of interactive fading and shading.

So cute! And whenever my cat hears the kitty meow sound effect, she snuggles up to me like she was jealous! XP

Does anyone know if this game was inspired by Isaac Asimov's short story 'Time Pussy' or if it's just a wonderful coincidence. Either way, still a great game! ^.^