[Note: This game is available in a "Pay What You Want" format, including free. If you like the game, please show your appreciation to the developer by paying them what you think is fair!]

Everything seemed to be going normally for Nigel. He has his own business with his two best friends, and taking care of 6 year old Alicia is more like having a playmate around than having to feel like a legal guardian. The only thing on Nigel's to-do list is to find a new tenant, and when an odd woman named Morwenna pops up out of nowhere, it seems that Nigel's problems are solved. But Morwenna is a strange girl, with strange things, and she starts stirring up Nigel's calm life... not to mention there are some odd disappearances happening around that are leaving the police baffled. Three Guys That Paint is a pay-what-you-want indie visual novel with a dollop of romance and mystery by Jasmin Osler that has you in the shoes of Nigel, a hard working house painter. Read along with him, clicking anywhere to pass the text, until the occasional choice pops-up. There doesn't seem to be a bad ending, but the story is weird and fun in a way that feels like one of your childhood fantasies coming to life. 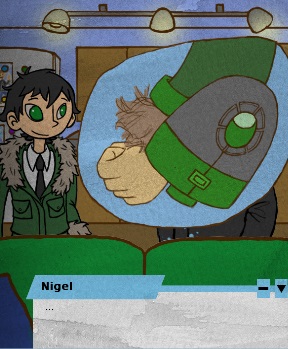 To really get into Three Guys That Paint you need to get into a less serious mood. It's a bit cheesy at times and never really gets too heavy with any of its themes. The artwork feels like you're reading a children's book with its soft backgrounds, and while it has some really warm moments between the characters, to call it a lovestory just doesn't fit. There are three characters you can pick to have the romance with, but before leading up to that there isn't much romantic interaction between the characters, and you can't pick to not fall in love with any of them. You'll feel a bit like your choices don't really matter because you can't lose or get a negative ending, but it was never meant to be that kind of story anyway. It's a tale your twelve year old self dreamed up on a rainy afternoon and you know what, sometimes we just need that. A little campy, a little crazy, and a lot of wonder. There are things brought up in the story that are never really addressed or answered, but that brings a sense of realism to all of it. Everything is not just there to be answered and there is always a little bit of mystery left. While it's unclear if there will be a sequel, Three Guys That Paint is a heartwarming space adventure that will have you building a spaceship out of your couch cushions.