You've been dreading this. It's really not that you've been putting it off: in fact you saw your mom before you went to sleep yesterday. But now that you've moved home, it's like it's expected that follow all the rules you had as a kid. As if letting her know where you are at all hours of the day will help you get back on your feet as an independent adult. Sometimes, even when you don't have anywhere to go, you just need to get away. Not even away from anything. Not like, from Dad or Mom or Ben. Just... away. You even found this cool guitar pick. Maybe David will like it. But now, one of those classic Nebraska storms has burst open the sky and it's time to head back. But you'd can take this call while you drive. Three Fourths Home is a piece of indie interactive art by [Bracket] Games that's been newly re-released in an extended edition with some cool extras. In it, you play as Kelly, a part-girl part-woman driving the rural stretch between her grandparent's dilapidated barn and the old home that's recently become new again.. It's an interesting piece of narrative presented in quite the unique way 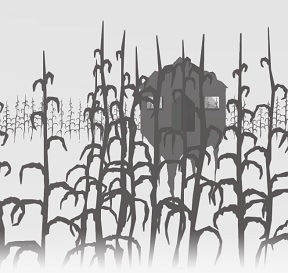 Generally, you will be holding down the right [arrow]/[D] key to keep the car in motion, while making conversational choices with the other [arrow] keys or [WAS], and using [spacebar]/[enter] to select. There are a number of different things you can fiddle with inside the car: [Q] toggles the tape deck, [E] honks the horn, [R] turns on the headlights, and [T] triggers the wipers. In order for the conversation to proceed, you must keep driving forward and make choices. Otherwise, time will stop, and while the landscape is pretty, you really need to get home.

Let's get something straight: Three Fourths Home is an unrepentant "Art" game with a capital A. "20 minutes of a disaffected twenty-something driving through a monochromatic rural landscape having an awkward phone conversation" definitely sounds like something in the oeuvre of a film school student's final project, and, objectively, its gameplay sounds like having to make small talk with the kid your teacher decided you were going to pair with on today's Computer Lab trip on the Oregon Trail. It makes a very strong case for itself as a story, though, and effectively uses some good design choices to keep the immersion of the experience strong. You wouldn't think that holding a key down with one hand while the other makes text choices would do so well at conveying the driving-while-on-the-phone sensation, but with the sound of rain and the crackle of the radio, there's just something transportive about the whole experience, and that's very intriguing indeed. What's more, one can imagine that the main themes of the game (family, adulthood etc.), while to a certain degree universal, will strike a particular cord with those in our casual gaming audience going through their own quarter-life crisis. More than a few players may think that the end of a half-hour playthrough is the perfect time to make a mom call of their own.

Three Fourths Home received a nomination for Excellence in Narrative at the 2015 IGF awards, and that should inform players the proper way to approach it. It is a work that is heavy on text and theme, and light on humor and action; more a Sundance darling than a summer blockbuster. But those in the mood for a thought-provoking piece of interactive literature should not miss it. It's not always an easy game to play, but it has a good chance of hitting you right in the feels.