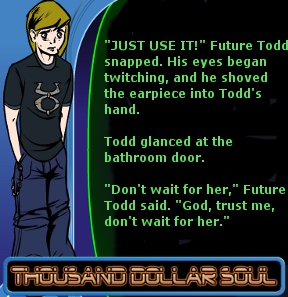 It's just an ordinary day for Todd until he gets a visit from the future... namely, himself. How does he know this isn't some scam, and this person is really himself from the future? Well, I mean, geez. The guy's got two ties. That is some serious future stuff right there. And in addition to some questionable style, he's also got a proposition for Todd, and some advice that may drastically change the course of his life... for better or worse. Thousand Dollar Soul is a text "Choose Your Own Adventure" style game about love and obsession... maybe. Your interaction in the story is limited to choosing from the options that appear on the bottom of the screen, which direct the course of events. Some of them may take the narrative in an unpredictable direction, while others may cut your tale short. Fortunately, if you don't like the outcome of a choice, you can just press "back" as often as you like to return to the previous page.

Analysis: Thousand Dollar Soul's biggest fault is that it just takes too long to get the ball rolling. The writing is far from bad, if a little stiff, but the characters aren't nearly as fleshed out as they really need to be to snag your attention (and your empathy) from the get-go. It doesn't help matters that the first decision you get to make is about the fate of your zit. The impression the story gives early on is unfortunately a rather shallow one, and, as they say, first impressions are everything. If a story doesn't hook you, you aren't going to be motivated to push past walls of text on the promise that it gets better eventually.

On the other hand, if you do stick it out, you'll find a surprisingly complex tale behind the deceptively mundane trappings. I started out initially unimpressed with the story and long scrolls of text, but was surprised at how drastically simple decisions changed the events within the narrative. And I do mean drastically. The problem most players will face is that so many of Thousand Dollar Soul's endings are abrupt and more than a little unsatisfying. There are thirty-five different endings in Thousand Dollar Soul, and if you want to have even the slightest clue as to what is really going on you'll have to try to unlock a good chunk of them. Seemingly happy endings can have a much sadder (or sinister) context when you've uncovered others.

While its pacing and wall-o-text presentation might unfortunately deter some people from checking it out, Thousand Dollar Soul is an impressive bit of work, if a little difficult to keep track of. (Flow chart, anyone?) Ultimately, my opinion isn't important; I'm just the word monkey here to point you towards it. Whether it means something to you is entirely between you and about thirty-five different possibilities.

Really liked this game. Maybe I'm a bit biased, as I've always loved the old "Choose-Your-Own-Adventure" books, but still, the story was unique and well thought out.

One of the most unique twists on the time travel story I've seen in a while.

I found it rather dark, sinister and disturbing. I enjoyed unlocking all the endings to discover the story of Future Todd. That's what I found interesting about it - it's a bit like doing detective work and finding out the story underneath the story.

Another interesting point is that throughout any single play-through, Todd wouldn't learn nearly enough about Future Todd to have any understanding of what is going on - as you will find in your first couple of play-throughs, but as you unlock more and more endings, the story unfolds for the player - if not Todd, and you can work out the series of events in Future Todd's life without the game spelling it out for you.

There are at least two endings where you leave an incapacitated teen girl alone with your invisible future self in a more-than-possibly-rapey context. It's considered good netiquette to include trigger warnings with this sort of thing, especially since they contribute little to the plot except to show what a skeeve he is.

Great game, 4 out of 5 mushrooms -- 5 if it had supported the mouse wheel to scroll through the text...

Story wise, one of the more original I've seen in a while. I was a bit shocked when I learned the truth.

interesting that that tiny little earpiece has enough memory to support personal memories, fully functional personalities, and emotions of quite a few people. This is what the future is, huh?... Your own Sims 1000 for only 1000 dollars! now with the added feature of taking over your body!

This is really really good.

Very clever! Yes I agree with you Lurker lol was a bit like that.

Agreed 100% with lurker: more than a little inappropriate for some, I'm sure. Downright creepy (in a pedophile, date rape, sex offender sort of way). Otherwise, it's sort of a neo-noir Matrix.

The dates and character's personalities jump around (granted, based on your decisions), but after you click back and forth through the decision tree, it seems a little flimsy. One little decision can be the difference between being best friends or killing someone in a fit of murderous rage. Butterfly effect, much?

The premise is at least interesting (very Thirteenth Floor/Simulacron-3) but the teen romance/obsession backdrop is a little cheesy, at least at first.

The writing and character development is sub-par: C- at best. The fun is figuring out for yourself exactly what the world(s) look like.

The thing I liked best was that the

replay aspect was built into the plotline of the game. Yes, you have to play through multiple times to get the whole picture, but the fact that you're experiencing the story over and over again is a part of the story itself.

Too many visual novels have that aspect to them without providing a plausible reason requiring it.

is it just me, or does future todd have two ties? xD

Awesome! A little dark, but quite enjoyable! So... the moral of the story is

"take some chances and do what you think will make you happy or else turn into a psycho killer rapist misanthrope"?

Dude, I am out of here to gather me some rosebuds whilst I may-st. I SO don't want to be Future Todd!

It's not loading at all for me, and I've tried on multiple occasions. The loading screen shows up, but the progress bar never moves, even when the game's left up for literally hours.

Ooo, creepy! I liked it a lot. At first, I found and ending really quickly and was like "that was it? Borrring!" Then I realized how many endings there were and was dead set to find them all! It was really fun trying to piece together all the pieces, but I have to disagree with you, Dora, about it being a little bit too hard to keep up with. Maybe I just found endings in a different order than you?

The changing character expressions were pretty cool, but the downside to that is that sometimes they changed before I had read to the point where they made sense to change, which was a little distracting.

I won't spoil the storyline for anyone, it's more fun to figure it out yourself :). I will say this, though,

Future Todd is one creepy guy

This game was great. I'd love to see more games with this same premise, perhaps set in the same universe.

Maybe a scandal involving the purchase, use, and development of those earbuds themselves? They sound awesome- especially the part where the broken earbud made static in young Todd's world, and the meta part where the earbud allowed you to pick between the favorites menu and a reboot of the system.

Could you please make more of these sort of games? I liked Air Pressure and the Dead Frontiers too! Pleeeeeeeeeeeease? :3

Also, I laughed, and got creeped out at Future Todd, at

If you chose favorites with the earbud, you go to the closet of Angela's bathroom, so you can see her stepping out of the shower, PEDO!

Also! I loved ending number 34!(Spoiler says what that ending is)

You accept Angela's request to go hang out with her, and some of her friends(including Clint) and once you do, it skips straight to you, in 2004, hanging out with Clint, where you are best friends, and apparently, Angela is still going out with Clint, and you found new love in 2000, and you will propose to your new love tonight

It is the most happy ending I've seen!

I recently found this game on Flashpoint and accidentally stayed up until 5am getting all the endings. (And writing a long analysis essay to my Discord friends.) I thought it was incredibly well done and interesting, so I came here to see what people were saying about it. I have to say, I disagree with the analysis. I wouldn't say it's particularly slow for a visual novel, so unless you dislike the genre entirely it shouldn't be a problem. The endings can be kind of abrupt, but I get the impression you're supposed to find at least a few of them before you're really done.

I didn't find it hard to keep track of, either, which is an achievement for me. It was a bit of a maze looking for endings I'd missed, but I found it fun.

Story-wise, this game was probably the most unique take on the "future self comes back in time to help protagonist" trope I've ever seen.

4,329 Views
0 Comments
chrpa— Jayisgames needs your help to continue providing quality content. Click for details Welcome to the Roundup 36 with three games! As mentioned in the previous roundups, only odd-numbered episodes are featured since even-numbered are for Robin Vencel's patrons. More...  ...

3,664 Views
19 Comments
chrpa— Jayisgames needs your help to continue providing quality content. Click for details Hello, the newest Weekday Escape just arrived! We start (and end) with Selfdefiant's game; this week we postpone their invitation to Georgia and visit an old space...  ...