This War of Mine

It's no secret that games like to glorify war, often simply by casting you as the hero who rappels down from the helicopter into the war-torn, bombed out town and blasting up the "bad guys" to save the day... which, naturally, makes you feel good. Who doesn't like to play the hero? But 11 Bit Studios are shifting the focus with indie survival sim This War of Mine, where instead of the gun toting hero, you control a group of three civilians in that war-town, bombed and dangerous town, struggling to survive. See, everyone thought the war would be over soon, but it's been several years, and three strangers who have banded together in the crumbling remains of a house they've taken for their base are barely able to get by day to day. Food is scarce, medicine even more so, and the only supplies you have are what you can find or make yourself. With no idea of knowing how far off an end to the fighting may be, how long will you last? And more importantly, what will you be willing to do when it seems like you have no other choice? This War of Mine illustrates an often overlooked and underexamined side of conflict, and despite some issues with repetition and simple mechanics, serves to humanize war rather than laud it. 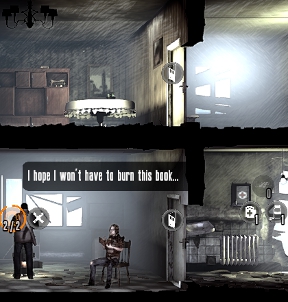 By day your time is spent at your home base, fortifying and building, as well as caring for your party. It's not much to speak of at first, and you'll have to scavenge materials to build beds, rainwater collectors, a heater, even a simple cook top and more. At night, sleep is of course essential to keeping everyone healthy and functioning, but it's also the only time you have to scavenge beyond your home. You can choose to have people guard home base, sleep, or send them out searching, and if the latter, you'll get to explore a variety of other locations for supplies while keeping an eye out for danger. While a lot of the other survivors out there are just trying to get by and may want to barter with you, others take more of a dog-eat-dog approach and can raid your home base, or attack you while you're out. As the days pass, the city around you changes, and your needs will, too. Not only will supplies become more scarce, but as the weather changes, keeping everyone warm, fed, and even mentally sound becomes harder and harder. Be warned, there is only one save file, and you can't save manually.

To play, you click on a character to select them, then click on where you want to go. Things with icons hovering above them are things you can interact with, while their icon represents how... a hand to take something, for example, or boards across a door to indicate you'll need to break through before you can open it. While scavenging at night, however, you'll want to be a lot more cautious, since making noise and being spotted can get you killed. Not every survivor is friendly, so whenever possible you'll want to watch for signs of movement, represented as red circles on the screen, and peer through doors before you open them. Your field of view while scavenging is limited to what your character could reasonably see directly in front of them, with everything else blurred out. As you move and interact with things, you'll notice faint rings radiate out from you, which indicates how much noise you're making, so think twice about running around or breaking things in hostile territory! Fill up your inventory with what you can carry before heading back home, since tomorrow is another day, though there's no guarantee you'll all make it through the night... 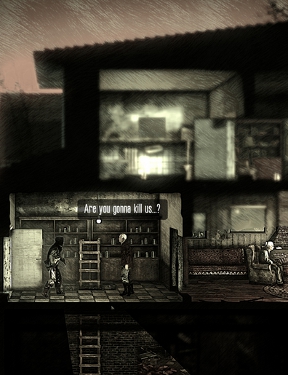 Analysis: I'd call This War of Mine situationally driven rather than story driven, largely because the focus is on the concept and setting more than its characters and any specific narrative. Your party members all have bios, but they don't really have or tell stories, with most dialogue consisted simply of expressing whether they feel good or bad about any situation, and how they feel physically. You're discouraged from engaging in combat not so much because it's dangerous, but because it feels clunky and awkward. Some of the realism is also hampered because you can't have characters work together... you can't tell two people to work on clearing rubble, for example, or send more than one person on a scavenging mission. The biggest setback, however, is that everything starts feeling repetitive in a hurry past a certain point, which may make for an accurate portrayal of a dismal existence in a war zone, but not for much entertainment from a player standpoint.

What the game is great at, however, is making you understand necessity and desperation. When you first start out, things are clearly not great, but you feel like you can afford to be generous. You'll feel like you can live off what seem like piles of plentiful scavenge, you'll share with anyone who comes knocking, and you can craft whatever you want. Managing your group's overall health is relatively simple, keeping everyone well rested by cycling out sleeping and guarding duties like clockwork. At least in the beginning. As the days pass, you realize that the places you scavenge aren't going to magically replenish themselves, and what felt like a comfortable stockpile is now getting dangerously low. You have to go beyond the safe places to those you know are dangerous because you have no other choice, and not only do you have nothing to spare for the people you meet, you start looking at your fellow survivors askance. It's not just that you suspect they might raid you or turn on you, it's that suddenly you're thinking about doing the same to them. Because you have no other choice, and it's you or them, and who knows how long help will take to come? It forces you into a situation where the problem isn't right versus wrong, it's live or die, and that's a distinction few games ever bother trying to make without heroic "save the world" style fanfare.

Make no mistake, This War of Mine is an important game, representing a much needed shift in perspective for the concept of violence and warfare in video games. With its minimal use of colour and graphite, sketchy style, it paints its world in stark, oppressive shades, and the sound and sparse soundtrack creates an even more immersive atmosphere. So it's evocative, and important, but is it enjoyable? Nnnnyeeaaaahnnnnhhh is the waffling sound I make, because really, how much actual "fun" can you have in a game like this? Is it entertainment to decide whether to gun down an unarmed man who's just trying to defend the supplies he needs for his sick father when your own survivors will die without them? Is it a good time to play a game where you deny giving food to starving children who show up at your home because you don't know where your own next meal will come from? Maybe more than being a fun game, This War of Mine is a thoughtful one. Introspective. Both "What would I do in that situation" and a reminder that life is shades of gray. And in a lot of ways, that in itself is an achievement.

This game is a real gem.
Yes it's depressive, and that's the goal of it:
"War is delightful to those who haven't experienced it - Erasmus".

Your characters will suffer in this game. When you think you have enough food, materials or water, something will mess everything up.

As your character slowly fall in despair, you eventually get in the same mood. But you'll still want to play, because you have hope you can make it through the war.