The fact that Smokoko S.A.'s physics-based stunt racing game Theft Super Cars doesn't use Danger Zone as its opening theme seems like a missed opportunity, but hey, nobody's perfect. Especially not you, our Ken-doll-lookin' brotagonist, who winds up owing a very powerful crime lord a very large amount of money when you're caught by the police while attempting to make a delivery for him and he bails you out. To pay him off, you'll need to track down and steal all the cars he wants, only in this case "steal" means driving the car through a psychedelic landscape full of ramps, constructs, enormous sports balls, and more to try to reach the garage before time runs out while the cops chase you with sirens blaring and rockets blazing. Yes, rockets. Use [WASD] or the [arrow] keys to accelerate and balance, and hold [spacebar] to use your boost when the meter is full. [Z], [X] and [C] will fire rockets at the nearest hazard if you have them, but since police cars can do the same, keep an eye on your health at the top of the screen. It goes down as you take damage, and if it or the time runs out, you'll lose the level and have to try again. You'll earn cash you can spend on upgrading things like your overall speed and health, and also special parts used towards the construction of your "dream car". Which makes sense since this whole game feels like something you'd dream up after a night-long binge on pop rocks, Grand Theft Auto, and hoodies. 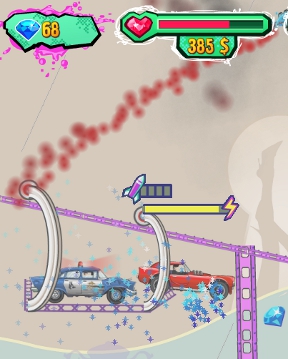 Despite its theme and funkadelic style, the game Theft Super Cars (which sounds like it ought to be read aloud by the Super Smash Bros. announcer) actually reminds me the most of is Earn to Die 2012. I can't decide whether enormous basketballs and stun-rocket-blasting police cars are crazier than zombies who can chase down a nitro-powered car, but hey, this is the internet, my friends... we can have both. While the chaotic visual style and endless bombardment of bizarre obstacles might put off players who prefer their car chases more gritty and realistic, there's something weirdly endearing about a game that unabashedly glories in being so freaking strange, and its unique style sets it apart from other similar games in the already crowded racing genre. Levels get increasingly elaborate, with piles of produce, rings of fire, slippery ice surfaces, and even moving platforms, all of which, combined with the soundtrack and surreal use of colours and environmental design, makes you feel like you should be wearing one of those puffy plastic jackets and a pair of obnoxious huge sunglasses while you play. At the same time, however, the gameplay does wind up feeling both familiar and a little repetitive since you'll need to grind for upgrades to pass some of the stricter time limits. As a result, Theft Super Cars might not have the staying power to keep everyone enamored for the long haul, but even if it isn't insanely realistic, it is insane in an over-the-top rambunctious way that's worth checking out.

There are a LOT of issues not just with the physics of this game.
It'd be nice if I went forward from a jump and not up.
It'd be even nicer if that cop AI didn't ALWAYS open fire when you are on hills.
Getting caught up on those hoops is SUPER annoying.

These are things you'd have picked up if you play tested it more.

The time limits are ridiculous, even on max boost you'll barely make it most times. If you have the parts to pick up, forget it.

Yeah, this game really isn't up to JIG standards. The physics are awful and the control is questionable.

I thought this was a bunch of fun. No control issues or issues with the time limits.

Can't seem to play this one? Tried on both Chrome and IE, but the game doesn't load.

Works fine on other sites.

Worked fine yesterday, though I agree with the time limits. I got stuck around level 11 because I didn't have the speed or firepower to get through it in time. Today though, won't load.

This managed to lose my saved game between today and yesterday somehow. And I haven't touched anything on my PC.

So thanks for losing all my progress on your already glitchy game!

As stated on the Support page, unfortunately our server had an issue that deleted several weeks worth of uploaded files and necessitated reuploading them to a temporary server. We apologize for the inconvenience and thank you for your patience.

I'm not sure the programmers of this know what "Easy" means.

It doesn't mean double the amount of cop cars of the last level who fire disabling missles, have an infinite amount, will ram you if they can to destroy you and take 2 missiles to kill unlike all the previous levels in "Easy".

The cop cars take too many missiles to destroy, a single hit from them flips you (consider that game over, you'll never have enough time to recover and make it to the garage), I've made it to the garage once after grinding previous levels for more health and speed.

You need a HUGE amount of speed. Also, rethink the rotation/landing physics as that mini is SUPER unstable.