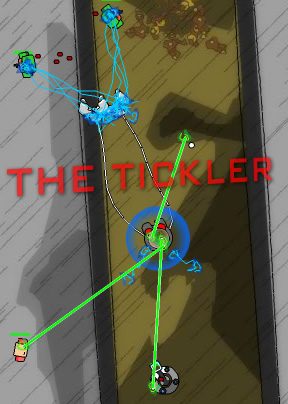 I don't have the foggiest idea of what the distant, hovercar-laden future holds, but if video games and science fiction have taught me anything, I sure don't want to be a part of it. There's unsavory aliens bent on human annihilation, colonizations of planets not fit for even the hardiest cockroaches to survive, and THEN there's the robots. Robots who question their existential place in the universe, robots who go off and form their own splinter governments of mechanical efficiency, and the good ol' uncomplicated ones who just go completely haywire and start frying people with eye lasers. The Tickler is a robot who falls into one of those three categories, in the latest action arena game from Revzin Ideaworks, and I'll give you a hint: he's really not that big on existentialism.

Following a short cut scene that sets up your homicidal killbot's back story, you're deposited right into the thick of the action. Controls are simple: the Tickler follows your cursor to move around, and clicking the mouse activates his retractable arms. Holding down the mouse button will keep his arms extended, and any enemy ensnared in his claws will be continually, er, "tickled" until they're no more. Destroyed foes yield cash that can be spent on handy Tickler renovations between levels, ranging from your standard-issue damage/armor/speed upgrades to peripheral weapons like projectile buzzsaws, lightning projectors, and of course the eye lasers no good killbot should be caught without.

23 levels of robo-tickling excitement await you, and while most of them don't provide too robust a challenge, there's the occasional bad apple that might elicit more than a couple of replays. Thankfully, the game graciously lets you hang onto whatever money you managed to score up until your demise, so you've got the chance to salvage some upgrades to get you out of your rut. There's also the "Zombie Mash," a survival mode where you see how many waves of the undead your souped-up Tickler can endure.

This is one of those games where you'll probably know in the first 10 seconds of playing whether or not the Tickler is your kind of heartless killing machine. There isn't a ton of depth to the experience, but there's a heaping helping of cartoony zaniness, and the rockin' soundtrack certainly adds an element of "extreme" to the marauding. The controls are easy, the gameplay is straightforward, and the humans look ripe for the robot definition of the word "tickling".

I was just playing The Tickler this afternoon and having a lot of fun while doing so.

I wanted an option to mute the music and keep the sounds, but there's only an option to mute all. I also didn't see the purpose of having to hold down the mouse button to reach out. It seems there was no strategy to that versus keeping them retracted and it could have saved my index finger after 23 levels of holding the button down.

Other than those small quibbles, this is a recommended play for those that enjoy "action" tower defense games.

Does anyone know the name of that cool rock song from the Tickler??

Minor quibble, as review alludes to: Bumpy difficulty curve. There were a few levels that took me quite a few attempts - some even on my second pass through (with the tricked out robot) - and I found that I couldn't beat them without well-timed powerup luckiness. And then the last couple levels were among the easiest - apparently "Aliens" are a bunch of wusses, (so we don't need to worry about them anymore, Hollywood, okay?).

I got to the level with the troop and drone carriers and that was pretty much it for me. I would most certainly consider that level a "robust" challenge.

It's nice that you get to keep the money even if you die, so you can upgrade, but after playing through that level six or seven times in a row, the charm wore off a bit.