The Sun for the Vampire

I don't know about you, but where I am right now, the heat of the summer sun is enough to make a gal go nocturnal. The sky is always bluer on the other side of the Earth's rotation, though, and for one little vampire, all he wants in undeath is to be able to see the legendary sun. And in Eyesteam's The Sun for the Vampire, he's prepared to brave a dangerous castle full of guards, traps, obligatory box-pushing puzzles, and other platformer elements to find the secret that will let a vampire step into the light. Inside the castle, there are keys he must collect to unlock the doors that lead deeper inside. He can run left and right with the [arrow] keys, and he'll automatically start gliding with his cape if he happens to walk off an edge. But what about going upwards? Rather than jumping, you'll be flapping and flying through the dark and spooky castle, combining on-foot puzzle-solving segments with tricky, batty sections where you'll be dodging traps in the air. What first seems like a fairly ordinary puzzle-platformer experience suddenly becomes a tight test of skill, precision, and timing as you must deftly navigate the castle in bat form while solving puzzles and defeating enemies on foot. 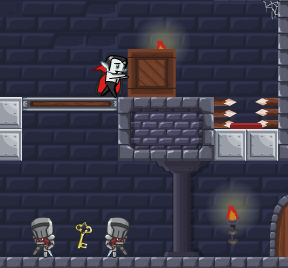 While this game does feature puzzles, they tend to be fairly simple and are rarely difficult. Only one or two levels have puzzles that might cause you to restart the stage, and even then, it's usually just a matter of doing a few basic tasks in a slightly different order. The bat form, and all the tricky flying that comes with it, is the real star of the show here. Some of the puzzle solutions are even centered around making your flight to the exit harder! The game begins somewhat slowly, but once bat form becomes more important, the game becomes a showcase of devious obstacle courses that will try your flying skills to their limit. It must be said that even learning to control the bat well is a challenge all its own. It has a strong sense of momentum and gravity, not unlike in Flappy Bird or one of its copycats. Short, quick taps will serve you well. But once you learn its intricacies, you'll find it's surprisingly maneuverable and capable. Much like learning how to steer a car, it's all about knowing how to work with your velocity instead of against it. When you've got that down, you can carefully flip-flap your way through anything... though the game does include a few sections that are much easier with the default glide! Much like with the developer's previous game, Pajama Boy 2: The Dark Forest, The Sun for the Vampire is strongly focused on challenge. If you're the kind of person who loves flexing your reflexes, then you'll lap this game up like it's delicious, cherry-flavored, corn-syrup-based candy blood.

Play The Sun for the Vampire

Cute, not too difficult, but it can be frustrating on a couple levels. Just barely managed to get all the coins and achievements.

Charming and has potential but the controls are just that bit too frustrating as well as the fact that you can't transform into a bat as you fall (or at least it felt like I couldn't) made for a bit more frustration.

A lot of effort in making the game is apparent though.

Barely managed 10 after about 20 attempts.

Gave up on 15. If the flight controls were better I MIGHT try it.

I completed all levels but am missing 3 coins. I didn't finish a level until I had the coin. Are there hidden ones I missed?

You don't have to fly fast. You can take one of the guys out from behind and that should solve your problem on level 10.

Ragequit on level 7 after it turned into Flappy Bird with worse controls.

2,093 Views
2 Comments
jayisgames.com— Jigsaw puzzles have been around for centuries, and they haven't changed much in that time. They don't need to. Nothing beats a jigsaw when it comes to quiet, focused, meditative gameplay. I'm A Puzzle, the online jigsaw compendium from...  ...

2,536 Views
3 Comments
chrpa— Jayisgames needs your help to continue providing quality content. Click for details Welcome to Mobile Monday! This is the first Mobile Monday in 2022 and we start the year with three excellent games. No need to introduce the developers...  ...

5,700 Views
10 Comments
chrpa— Jayisgames needs your help to continue providing quality content. Click for details Another Christmas game arrived ex post, this one by Neat Escape, and it is as holidayish as possible. Shining Christmas trees, beautifully wrapped gifts, Santa with reindeers...well, we...  ...

2,533 Views
1 Comment
chrpa— Jayisgames needs your help to continue providing quality content. Click for details Welcome to Weekday Puzzle! Robert Alvarez (rob 1221) latest game is the only one not Christmassy in this WP - it's a math game, and very well...  ...