Note: At this time, Episode Two is available only as an in-app purchase after installing Episode One, which is free.

One of our favorite average Joe heroes is back in House on Fire's point-and-click adventure The Silent Age: Episode Two for iOS and Android. If you're like me you might need a little memory jog on what happened in Episode One, so let me sum it up. Joe is just your average guy working as a janitor in a government facility until he's tasked by a dying man to use a time traveling device to save humanity from extinction. When last we left Joe, he was on his way to find this time traveler as a young man, hopefully to get some answers, and Episode Two picks up right where we left off. Swipe your finger around the screen to see what you can interact with, then tap on the object you'd like to learn more about. Tap to make Joe walk, or double tap to make him run. Your inventory runs along the bottom of the screen, just tap an item once to pick up, and tap again to make the object interact with any item on the screen. And, when available, tap the time machine to travel in time, a fun mechanic which is again integral to the story line as well as to solving puzzles. 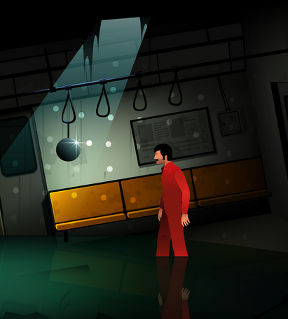 Once again, The Silent Age manages to draw you in with top notch storytelling and the same gorgeous atmosphere. The game is excellent at creating a sense of urgency as you play, as if the fate of humanity really is up to you. Which caused me a little bit of a problem as far as how the text works. When there's dialog between characters, you are in control of tapping to progress when you're done reading. However, when it's just Joe's internal dialog or learning about things in a room, you have to wait for the words to scroll themselves, and I often couldn't tell if he was finished before frantically trying my next move, and which may make you a couple of things along the way. Many of the inventory puzzles are straightforward, while others take a bit of creative thinking, and all serve to move the narrative along at a good pace. With great writing and sound design, Episode Two wraps things up nicely, with a satisfying ending which will also leave you ruminating about the ramifications of advanced technology in imperfect human hands.

Android:
Get The Silent Age

Stranded in the Future

Stranded in the Future

This was fun. for an experienced puzzler the puzzles are very easy, the answers are obvious with very little thought. however the story is very good and i liked the graphic style, so i approached it more as a piece of interactive art than a game. if you approach it that way then you will really enjoy it... p.s. it helps if you liked the film "back to the future".

This was nice, but it feels as if the story was a little rushed to fit in into the second episode due to trouble financing it.

Wyatt, the website says Kindle Fire 2nd gen or newer. Do you have an older model?

I know what you mean, when I got done with the puzzles in the last era and met the doctor, I didn't expect an ending to be just handed to me. Everything ended a little quickly and neatly for me.