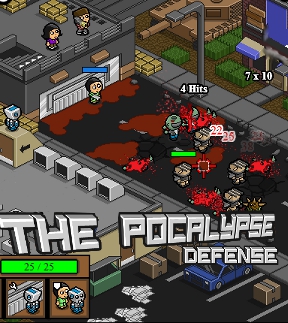 When robots, vampires, mutants, and blood-thirsty plants start adding to the undead menace, it's time to face facts; this isn't just apocalypse, it's the pocalypse! In The Pocalypse Defense, a action defense shooter game from Green Pixel (the combined talents of Rich Halliday and Joe), you're in charge of protecting the city of New Hammerston and its survivors against the incoming waves of creatures who would love nothing better than to do various painful, fatal things to your fragile human flesh. Fortunately for you, several of these survivors ain't your ordinary Joes... well, uh, one of them is Joe, but he's certainly not ordinary. In fact, he's a superhuman, of sorts, and on his side is Jess with her heavy weaponry, genius and sniper Bernie, and robotic wonder Harry. If you want to know more about them, you'll have to see the animated comic the game is based on of the same name (The Pocalypse, which is, suffice it to say, a bit too bloody and swear-y for children), but you don't have time for that right now... you've got apocalypse of your own to deal with!

The only character you'll control directly is Joe, who begins the game armed with his fists and a simple gun. Use the [W] and [S] or up and down [arrow] keys to move him back and forth, [A] and [D] or the left and right [arrow] keys to cycle through his weapons, and click on enemies to fire/attack as they approach. Bernie and Jess will provide support from the rooftop, while Harry has a score of useful abilities you can activate as long as he has enough energy for them. Joe has a limited number of hitpoints, but even if he gets knocked out, he'll be back on his feet swinging again after a brief recovery. The gate, however, is another matter, and if enemies break through, it's Game Over; do your best to hold the line during waves, and use whatever cash you earn for repairs.

Between waves, you'll be able to visit several large upgrade stations within New Hammerston and spend cash on repairs, enhancements, or new weapons and abilities. Most of these can be unlocked with cold, hard cash, but some of them need a little manpower; during waves, survivors will run towards the gate. You can click on a survivor to heal them a little as they approach, and if they make it inside safely, they'll add to the population. Be warned, however; the game does not save progress, and if you close the window or exit to the main menu you'll have to start all over the next time you pick it up. 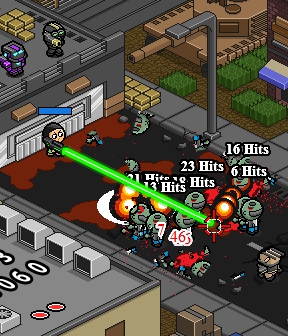 Analysis: There are a lot of zombie games out there, but few of them are as cheery, silly, and outright weird as the overall vibe presented by this little gem. With so many zombie games taking gray, morbid approaches to the end of the world, The Pocalypse's bright, energetic mood and over-the-top gameplay is like a breath of fresh air. (Air that carries the stench of blood and rotting flesh, but I digress.) The design and animations are fantastic, the soundtrack is bouncy and fun, and the dialogue is funny enough to make you wish there was more of it. While the game lacks any real sort of an end, the sheer amount of upgrades on hand will keep completionists busy for a while.

Still, the Pocalypse feels like it needs... more. More monsters, more integrated story, and certainly more variety. A few "boss fights" would have livened things up and eliminated the sense that the game turns into a grind after a few levels. There were also a few times where the controls felt a little awkward; being unable to move and shoot might be realistic, but it's also frustrating, and when enemies get too thick shooting becomes erratic and unreliable, perhaps because it became difficult to target monsters when they were piled on top of each other. Of course, once you manage to save up enough for the laser and dump a few upgrades it, the game becomes significantly easier... turns out the natural predator of the zombie is a superheated beam of destruction to the face. Who knew?

The Pocalypse Defense is practically screaming for a bigger, badder sequel, but what's there is still fun and incredibly well presented. While this is Green Pixel's first game, it's pretty clear they've got a massive amount of talent and are definitely developers to keep your eye on. In the meantime, get out there and dust-ify/spatter/expolode some enemies. (And then make sure to check out the comic the game is based on.) And remember... spinning is the most effective means of attack!

Poor UI design. Took me a while to notice I had other weapons and even then I didn't know how I changed it.

Nothing really new about this game that makes it stand out from the hundreds of other defence games. Nice art though.

I dunno, I feel like I'm missing some crucial bits of the mechanics. Like, at a certain point, my automatic rifle stops firing automatically, and aiming seems to fail utterly. In fact, I'm not sure I do any damage at all.

There's a lot of potential here, but it's just too frustrating.

Is it just me, or is the high score list rigged? All of the top ten entries have the same name, and the exact same (unattainable) score.

"Since the game only ends when you die or submit a high score, however, this isn't necessarily as big a deal as it might have been."

Incorrect. If you play through enough waves, you get a nice little cut scene between the characters talking about going out into the town to fight the baddies, and eluding heavily to a sequel game. The game then ends, only allowing you to submit your high score. It also has a strange dark figure appear at the end, who perhaps I would know more about if I watched the webcomic.

I'm not sure how many waves it takes, I stopped paying attention, but it happened just after I got to 100,000 points.

A tip for anyone who wants to utterly break the game:

Get the fully upgraded credit tree. Unlock the laser, and a couple of upgrades for it.

The enemies will never even make it halfway to the gate again!

Massive exploit: You can buy a given upgrade level without buying those that precede it, and for its listed price alone. It's hard for me to say definitively if you still get the benefits of the skipped upgrade levels (I can't find an upgrade that easily lets me take objective measure), but it sure appears so.

Also, I discovered one downside to the massively overpowered laser weapon: It's pretty psychologically draining when the audio clip gets stuck and starts looping over everything in and out of combat.

Anyways .. happy playing and please check out Thepocalypse.com .. Thank you ^_^

Anyways .. happy playing and please check out Thepocalypse.com .. Thank you ^_^

@Revvy: What you're describing with upgrade pricing is not so much an exploit as it is a deliberate mechanic. While it may not have been deliberate in this particular case (seeing as the creator has more experience being an artist than a game creator, despite his degree in game design), games have used this pricing mechanic in the past.

Games that let you pay only the listed price for a level of an upgrade, as opposed to requiring that you pay for all levels prior to a certain level as well, force you to make different optimization choices than games that use the other pricing structure. These games create an incentive for waiting and hoarding resources to buy larger upgrades earlier (and not wasting resources on smaller upgrades that have no bearing on the final product), at the cost of a decreased chance of immediate survival due to deferred upgrades. I find this mechanic more interesting simply because it offers more choices than what seems to be the standard romp through required upgrades that may as well be automatic. (Not quite automatic, but I often feel that way.)

The cutscene and the end of the game happen after wave 20, I believe.

The gameplay, while janky, was still addicting. Far and away the thing I liked least is the main character. He seemed like little more than an insertion fantasy stand-in with no endearing characterization and the kind of attitude that would get him punched pretty quickly in the real world.