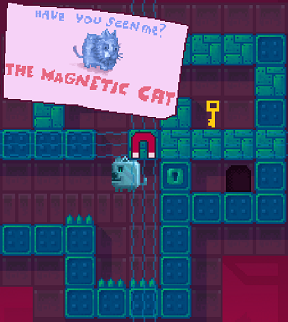 Scientists have spent years and millions of dollars to turn a regular cat into The Magnetic Cat. (Why? Uh... For science!). His frizzy ferromagnetic fur allows him to stick to all sorts of surfaces, and, as the scientists unfortunately discovered, to easily escape from secret government labs. Now, he wants nothing more than to settle down with a family, but there's still 30 levels of obstacles in his way. A puzzle platformer developed by GrimToyz, The Magnetic Cat has an attraction all its own.

Move The Magnetic Cat with [WASD] or the [arrow keys], with [up], [W] or [spacebar] to jump. With the mouse, click metallic blocks to magnetize them. Magnetic blocks attract The Magnetic Cat horizontally and vertically, and using this force will allows him to avoid obstacles. Keep in mind that while magnets can keep The Magnetic Cat clung to the ceiling, metal blocks are slippery, and magnetism is not enough to keep you from sliding down walls. Click a magnetized block once again to demagnetize it. You may magnetize up to three blocks at a time, but the more blocks currently magnetized, the smaller the range of their attraction will be. Later levels will feature Metal Crates and Keys affected by magnetism, along with the usual collection of spikes, lava, slicing saws, and acid pits.

The Magnetic Cat should prove a treat for all fans of puzzle platformers. The central magnet mechanic is well-conceived, and the levels are designed well enough to allow multiple equally-satisfying solutions. The implementation could be a little bit better. While individually clicking and unclicking boxes works fine for most levels, it's kind of awkward when the puzzle requires specific timing. It would feel more natural for, when three boxes are already activated and another one is clicked, the least recent one to automatically deactivate (while still allowing you to click and unclick boxes manually). Also, there should be a way to deactivate the magnetized boxes that have crossed the border of the screen without resetting the level, either by allowing free-scrolling or by the afformentioned suggestion. That said, these minor issues are easy to get used to, especially when balanced against the game's charms. Have fun with Magnetic Cat watching you cogitate!

Personally, I think they could give you a little more instruction on how to play the game. I still haven't quite got the hang of using magnetism to jump on top of the block you've magnetized.

Also, is it just me or is the sound effect for when your cat is killed by the buzzsaws disturbingly realistic?

The music is painful and level 8 is downright impossible.
I know I can mute it, and I know there's a walkthrough, but why release a game with such unpleasant sounds?

I couldn't jump high enough to turn on the 1st magnet you come to.

I am not sure what you mean, but you don't jump to attach the magnets. You just click on a metallic stone that will hold a magnet.

I totally agree with you about the "music", and for level 8.

The key is also magnetic and can be moved.

I really liked the last level, the

though it took me a while to figure out.