The Little Who is full of questions; he wonders who he is and how he came to be. There are things that he does know, though: the world is dangerous, sometimes blocks can be moved to element that danger or to open doorways, and he is all alone. Then, one day, he sees "her" and things begin to change as, together, they navigate their way through this drear-saturated world toward the light. Why? Because it is and that's all they know to do. Guide our angst-filled protagonist through a series of obstacles in this atmospheric puzzle platform game from Alex Kershaw using the [arrow] keys to move and [spacebar] to toggle between the two characters. Or use [R] to restart after missteps or an error in timing. 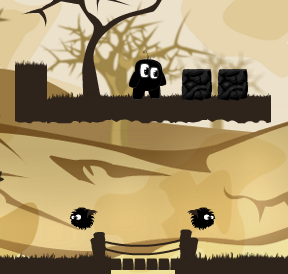 Most of the 30 levels are easy, lulling you into a state of complacency until the last third of the game, when the difficultly ramps up significantly as you coordinate actions between the two figures. The emphasis is more on story and puzzle than platform, probably not without reason, as it mirrors the little who's puzzled thoughts. The surreal, monochromatic artwork by Enotick also takes a starring role along with Kevin MacLeod's music and Lucas Hartbarger's pitch-perfect narration. Any existentialist could probably already tell you where it's all headed, but the story, which taps lightly at the fourth wall, ends with a punch similar to a certain Bugs Bunny cartoon. It may have you taking an introspective look at these poor creatures, the wayward characters of casual games, who are subjected to so many travails just for the sake of our entertainment.

Play The Little Who

I didn't encounter any lag playing this whatsoever. SMOOTH AS BUTTAH.

Not sure what I am doing wrong? I cannot get past the (3rd?) level, "I did not know who I was." I knock the blocks off onto the buttons that open the 'gates' but either way I jump - onto the first block, onto the second block, past the blocks to the lightbulb etc, I die. What am I missing?

Nevermind - got it. POP.

It's one of those puzzlers that needs every move in the right order or you die...

"But one day she turned away from me" has me stuck. I can't make her jump, why not?

NM, figured it out.

Use the down arrow to make her jump

Not bad. But I'm terrible at 'jumping' games :/

Nice little game. Once I figured out

that you pressed down for She-Who to jump, it was actually easier than most of these "controlling two character" platformers, where you're always thinking "If I jump here, what happens to the other one?"

One thing I've noticed, though: in games like this, it's always the male who's the "main" character. It'd be nice to have one where you have to direct the girl to the goal and the boy helps, just for a change.

requires you to push up and down at the same time.

What game asks that of you?

I'm sorry it gave you trouble, Hippasus. It's likely there's more than one way to solve some of the later levels because I don't recall solving the last level in such a way. It took some maneuvering to get the characters where I needed them, but I don't think I pushed up and down at the same time.

I like it. Reminiscent of the wonderful One and One Story, though not quite as well done.

Hippasus; yeah, I tried dozens of times to get the timing right, and only managed to actually do it when I realized I could

use left/right/up to control him, and S to make her jump (or W/A/D for him and down for her)

Meh... seen it before. Many times.... I give this a scratch 'n' sniff "Good Effort" sticker but I am over this game and it's ilk. It's stale game developers! Quit trying to disguise basic platform games with existential B.S. and a boy/girl relationship angle thrown in for good measure.

It's turning me into a crotchety old man. Now excuse me, I see some kids on my lawn that shouldn't be there.

I'm stuck on "The world was cold and full of danger."

Can you remind me what the scene looks like and I'll try to help?

Great fun until the "freezing" level, where I found it too difficult to manage the timing. I managed to get past the first platform twice out of about twenty tries, but after failing to get to the end twice, I finally gave up.

There must be some way to make the controls more forgiving so that the final levels are mainly a puzzle not requiring micro-timing skills. Having the game suddenly jump from mainly puzzle to mainly platform was frustrating for me, because I was enjoying the puzzles.

Whoever made this game took the background music from the trailer to an upcoming game called "The Bridge", it has no sounds so it is easy to record and place somewhere else.

[The music comes from Kevin MacLeod, who offers royalty free music, so it is possible "The Bridge" also used it. -elle]

Please don't make accusations like this unless you have investigated the issue fully and are aware and certain of all the facts. Otherwise, you risk smearing the developer.

Like elle points out, there are sources of royalty-free music available to game developers, and it is very likely you will hear the same track in multiple games because of this. In fact, Kevin Macleod is a very popular composer of music used in games due to his remarkable talent.

I didn't mean to say this in a mean manner, when I watched this video (thebridgeisblackandwhite[dot]com) after playing the game, this made me think that the music was stolen, but since the music is royalty free it's okay then.

[It's absolutely fine to say "hey, this game uses the same background music as this here other game." Just please think twice before jumping to the "hey, this music is stolen" conclusion unless you have all the facts. Thanks. :) -Jay]

Ok jcfclark im having the same trouble i cant get past that level either when i do the level i jump off and get onto the block on the left and the right and both sides i die.....If anyone has gotten past that level i need some help cus im mad/pissed off because i thought it would be a cool game but it sucks so far............So anyone plz help me.....

I cant get past level 3 like jcfclark and when i jump off either side i always die any help would be nice.....thanks to who ever gives me help.

He can't fall far so make sure there is(are) block(s) to break his fall... You can push them over, etc.