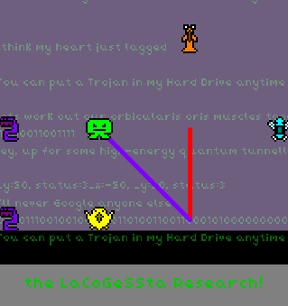 Can you walk with the animals? Talk with the animals? Grunt and squeak and squawk like the animals? Well, now's your chance to prove it by setting them upon each other in an all-consuming frenzy! The LaCoGeSSta Research would like you to run a few simple tests. Not on yourself, of course! That's what we have all these different species for. (I can hear your keys rattling off enraged letters on behalf of PETA right now.) In this puzzle game, your job is to solve each level by moving various critters around the screen with the [arrow] keys; when you bump into another critter, the one you're controlling is consumed, and control switches to the critter who ate it. Continue moving from critter to critter until you only have one left. Sound simple? Well, mostly. Each critter has its own set of movement restrictions, sort of like a chess piece, so you'll need to plan your course a bit more carefully. Press the [shift] key to see the entire puzzle at once, and press it again to get back to the game. If you get stuck, or if your critter goes soaring off into the void because you overshot a target, just tap [R] to restart the level. If you find the constant chatter of the background text distracting, you can deal with that in the options menu.

There are, of course, a few issues with the game. The game is, essentially, a one trick pony; ot would be nice to see the game test your brain a bit more by introducing new concepts and rules the farther you go beyond simply "here's a new thing, it moves like this". Your critters also tend to fall off the screen enough that it would be nice for the game to automatically restart the level for you when it happens (or just undo your last move) rather than requiring you to hit the button yourself. The themed menu, where you actually select options using the critters themselves, is a cute idea, but can be a little tedious in navigating when all you want is to change the options or turn off the sound. A simple click-to-pick menu might have been quicker, if not as cute. Fortunately, the team behind the game is already working on a sequel that addresses these problems and expands on the gameplay.

I'm a big fan of light brain puzzles, and The LaCoGeSSta Research fills that niche nicely, despite having a name that is officially the most tedious to type out repeatedly. (Developers, that was not a challenge.) If the gaming world is a newspaper, this would be the crossword puzzle you do over coffee each morning; simple and quick but satisfying. The randomly generated levels should keep you busy until the sequel comes out, but in the meantime, don't you have a bunch of beasties to force into mortal combat... for SCIENCE?!

Thanks to RoomEscaper55 for suggesting this one!

Kinda weird, kinda fun. Only passed the first 5 experiments so far, but my real life experiments are no calling me. I like the music and the background and the diversity. I can see this one getting pretty hard towards the end. It might be nice to see the whole field to plan your experiment, but maybe that's just part of the challenge

You know the colored trails the creatures leave behind as they move? When you finish a puzzle and zoom out, the trails can make some very eye-appealing designs.

I like it! The animals are kinda cute and the concept is sound, the puzzles usually aren't extremely challenging but it's a nice lunch break. The sounds can get a tad obnoxious, but I think I can put that behind me. For SCIENCE!

"Specie" is not the singular of "species"...

Other than that, perhaps not a fresh mechanic, but still an interesting game. Nerdy pickup lines in the background were pretty amusing.

The ability to zoom out and see the whole board (shift) was useful, and so is the grid (g). It was interesting to see the patterns left behind by your movement.

how do I move the snakes?

Pretty fun. I think I prefer the random puzzles, because the standard 15 are sort of set up so that you solve them more by following the level's hint rather than by logic. I could do without the background, though.

It doesn't seem to recognize my spacebar in Google Chrome. It runs okay in Mozilla.

What do I do about falling off the edge of the world? In a puzzle I can hit escape, but it looks like if I fall off the menu I have to refresh.

@PlasmaSheep What? I could have zoomed out the whole time? That sure would have made it easier XD

Hi Ezra. As mentioned in the game instructions, and in this review, just hit R to restart the level. :)

Can't believe you didn't mention the awful, awful pickup lines that display in the background (no those are just random lines of code).

The game itself isn't anything new (both in concept and the fact that its been around for a while), but its a fun and simple distraction. Most of the levels can be done just by trying the "don't leave anything behind before moving on" route, sort of splitting each level into several mini levels. Although some will still require you to zoom out and think a while.

Oh, I see it right there in your review. Thanks! =)

The random 2-by-2 levels wouldn't challenge a 5-year old, but the 20-by-20s are impossible to plan ahead in. So I recommend you choose one in between.

For the snake, just press 2 arrows at the same time. For example, if you want to move to the upper right, press both the up and right arrows.

I refuse to play any game which doesn't include a mute option. Especially if the game insist on constantly playing horrible, horrible music.

I tried lowering the volume from that amusing options menu, but the damn fish jumps down and the volume stays the same. What's worse, once I started doing the "experiments" I couldn't even return to the main menu. And when level 6 decided to suddenly up the nausea level of the music tenfold, I quickly quit before my ears decided to self-destruct.

I was initally annoyed with the obtuse way in but now I think I'm happily in love with this game.

This game didn't do anything for me at all, and I normally love puzzle games.

It was just too easy, and not even in that "Yay! I finally beat a game!" kind of way... more like a "I just randomly solved FIVE LEVELS without trying" kind of way.

ARRGG!! my character if there is nothing to run into just keeps on going and going nonstop! AND THERES NO RETRY BUTTON!!! IM GOING INSANE!!!!!!

@ Epicnessity: The retry button is "r".