The Keeper of 4 Elements

Earth! Air! Fire! Water! Some old guy with a stick! By their power combined, they are... The Keeper of 4 Elements, a strategic defense game from Char Studio! When an evil dark lord sets his sights on the mystical scrolls that reside on a distant island, allowing their owner to wield the power of the four elements, he thinks they'll be easy pickin's. After all, their guardian is some old dude with a funny hat. How hard could it be? Well, when that old dude has the ability to construct magical towers to rain destruction down on you, summon torrents of magical elemental energy, and straight up lightning-bolt your keister, pretty hard indeed. Luckily for you, that's the side you're on! 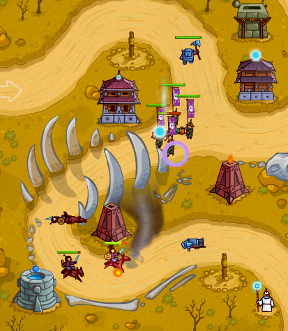 The goal in each stage is to prevent the enemies from reaching the other end of the winding path, since doing so takes health from you, and once all twenty health points are gone it's game over. Along the path you'll find dirt mounds you can click to build one of four different elemental tower types, each with their own strengths and abilities. Once the stage begins, enemies will begin flooding through in waves, and your towers will attack anything within range (as will your monk, stationed at the end of the path), earning cash you can spend to build more or upgrade the ones you've got. (Cash doesn't carry over between levels, so don't be stingy!)

Initially, the enemy forces are a bit of a joke, but each level brings new enemy types to contend with, from shamans who heal those around them to swordsmen who can dash and more. Moreover, many enemies are only weak against specific elements, and deal varying amounts of damage to your health, so getting cocky is a bad idea. Fortunately for you, you'll not only gain access to more powerful tower forms and magical spells, but you'll also earn stars for successfully completing a level that you can spend on permanent upgrades. Each stage has multiple modes of difficulty and thus multiple chances to earn stars, and you can reset spent stars at any time to shuffle your upgrades about as you wish. Make sure to view the Keeperpedia for in-depth information on everything from enemies to spells and towers! 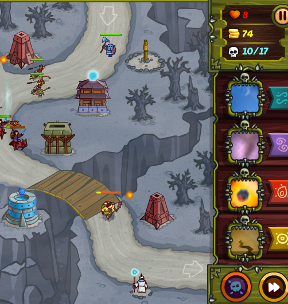 Analysis: Chances are if you're a defense fan, The Keeper of 4 Elements will remind you of both Cursed Treasure and, to an extent, Incursion 2, which is hardly a bad thing. The game looks great, though there are a few issues, such as text descriptions of towers and spells being cut off. Having an enemy's description appear in a small text box at the bottom of the screen is mostly fine, though it is potentially a strain on the eyes. Having a pop-up might have been been better, especially since the in-game text doesn't detail an enemy's elemental weaknesses the way the Keeperpedia does, which can be frustrating when you're dealing with a new type of foe for the first time.

These complaints all largely come down to streamlining the experience, however, and apart from a few rough edges, The Keeper of 4 Elements is largely a very solid and enjoyable defense game. Like Cursed Treasure, the four towers initially seem limiting, but when placed so that they support one another and use their strengths to their best advantage, display a potential for remarkably clever strategy. Which, incidentally, is important since you'll want to replay each level's difficulty tiers to make sure you get the maximum amount of stars for upgrades. It's an extremely addictive little game, if not necessarily original, and enough of a satisfying challenge to keep you hammering away at each level's difficulty tiers until you complete them all. Though it doesn't really bring much new to the genre, there's a lot to be said for doing something very well, and with careful balance and appealing strategy, The Keeper of 4 Elements does just that.

Play The Keeper of 4 Elements

I Heart you, Dora.

Aw, I thought you'd go Avatar with that opening.

I heart you back mon ami. And to my great shame I have yet to watch Avatar. :) Fraid I'm of the Captains era.

Kinda fun... but the inaccurate Language conversion bugs me... "The monk damages the enemies very strong" or "Do updates" Have to think sometimes what they really meant with their descriptions...

Ack, the difficulty level seems to ramp up dramatically between stage (5) and stage (6). Any tactical help would be very appreciated.

The important thing is to achieve all the levels in the 3 modes, like that you can collect stars. Upgrade in first the Monk with all the available skills for him and then the towers.

Regarding the descriptions, a new version is available and will be released soon.

Dora, you should probably know

it could be in the MFEO zone.

I like the style, but some of those maps... they're Kingdom Rush maps rotated. I've played enough Protector games to know there's more than one way to do teeny tower defense paths. Heartily agree that the elemental aspect of the enemies should have been emphasized, I mean it is the name of the game.

If you're gonna clone the King(dom), the ramp-up in difficulty needs to be way smoother. It feels like cheating to need upgrades to get through a level. And you also need to be able to make livestock explode. Right?

Try the new version. The studio has worked on the balance of the game and now the levels are easier in easy mode.

Hope the game is better than that 20 second SoGood splash screen. That thing sat there forever. Dev needs to speed it up and get it out of there.

Is there a reason it won't work on ie anymore? It was working fine up until today It works on firefox but all of my progress is on ie!

Hello,
It works fine for me on IE10.
Which version do u use?

Today the game also stopped working for me in IE9. Frustrating as I was on the second to last level!

Ok jeff, why have you been so evil that you have made level 8 impossible!
My mom has tryed to finish that level for almost 5 - 6 hours!
It is even impossible to do it on easy!
if you tested this level at ALL difficulty levels, then you must have been a god at this game, or a hacker

Hello TheSkyShaft, believe me you can finish the game.
I finished it three times (you could check the scores at the end of each level).
You absolutely need to play level per level in the three modes for getting all the available stars and then do the right upgrades.
In first, upgrade at max the Monk and then equally the towers. Also in this game it's very important to choose the right tower at the right place. So some levels need to be played many times but finally it's good when it's hard, isn't it?