Just in time for that scary late October holiday, The Haunt 2 from Furious Apps arrives with a serious dose of point-and-click adventure-style puzzle solving! Following the same set-up as The Haunt, you take on the role of a paranormal investigator who has come to rid the town of its little ghost problem. You'll sift through houses and barns, train stations and a dark forest in search of clues, and what you end up discovering may not be as "little" as the town would have you believe. 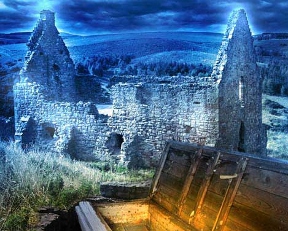 The town has been dealing with a ghost problem for the past 150 years, largely due to the historic battleground located in the nearby forest. Recently, the paranormal happenings have been much more frequent, so mayor Martin Townley has invited you to come and take care of things. Travel through the town by tapping on possible points of interest or the edges of the screen. A convenient "back" option often appears to make retracing your steps easier. To investigate items or objects, simply give them a tap. Your inventory stashes itself neatly at the bottom of the screen, and to use any of its items, simply tap one followed by where you want to use it.

Much of your time in The Haunt 2 will be spent locating items you'll need to advance through to different parts of the town and its surrounding land. In addition to the puzzle-specific items, you'll also need to keep an eye out for coins, moths, and jigsaw pieces, all of which are stashed around the scenes in some cunning ways. Moths give you in-game hints and are probably the most useful things to look for, coins are there just for fun, and the puzzle pieces must be found in order to complete the game. 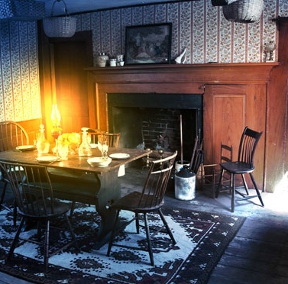 Analysis: Just like The Haunt, The Haunt 2 manages to fit a lot of entertainment into a single well-illustrated package. Not only is the adventure a lengthy one, but the puzzles are tricky, often involving multiple steps using clues and objects found throughout the game. All of this is tied together with a nice and easy interface that never gets in the way, allowing you to jump right in to the mystery.

The only real shortcomings in the game are minor at best, and they're issues you very quickly learn to work around. Sometimes bits of white text are obscured by particularly bright pieces of scenery, for example, but rarely is there anything vitally important hidden by the light. Also, it's not always clear which spaces you can investigate and which are just pieces of scenery. The solution is to try visiting everywhere, tapping the ends of corridors, trail heads and the edges of every screen. Missing a room will be the number one reason you get stuck in The Haunt 2, so be thorough!

Can't get enough of The Haunt 2? Try The Haunt!

Another superb point and click game from Furios Apps, one that is filled with enough content and intrigue that it would feel right at home as a casual download, but made to fit quite elegantly on your mobile device.

Thank you for a very helpful walk through. Wonderful job and very thorough.

Thank you, Barbara! I'm glad you were able to find the help you were looking for. :)

Both The Haunt and The Haunt2 are very good games i have played each all the way thro and started The Haunt for the second time so I will give these games a 5 star rating. Jay

Hi Trinn, thank you so much for making such a thorough walkthrough! :) One question: you say

photo #19 is in the Storage Room

, but it doesn't show on the picture you've posted of that place. I must have clicked every square millimeter there a thousand times. Could you please explain or repost the picture...? Thanks a lot!

I'm glad you've found the walkthrough helpful! I've updated the image in the walkthrough to include Photo 19/20, so thank you for pointing that out! If you're still having trouble finding it, you can locate the photo:

On top of the crate labeled "Bethesda Water" on the shelf under the four glass jugs. Here's a screenshot for reference.

Let me know if you have any other questions :)

I am at the end of the game and have put the scepter into the place on the floor, but only one chain is attached to the coffin. When I tap the scepter, the coffin won't raise. What am I doing wrong?

I am having an impossible time using the tub on the snake. What am doing wrong. I clicked on te washtub in my inventory. And I repeated lt clicked on the snake until it attacked me. Please help me anyon.

Photo 23 (Left Forest Path, n.10 of the puzzle pieces) is broken.
After going through all the photos, I'm still looking for the last piece of the puzzle...I hope it is hidden very well in photo 23 :-)

I have spent days trying to open the suitcase. I have all the colors except the last green. What am I doing wrong?

How do I put the bath tub on the snake, he keeps biting me ?

Can anyone tell me where photo 5 is? Not the one shown here but the one that is labeled 5 in the game.

The mini-Stonehenge meadow where the blue flag is supposed to be does not have the flag. Without this flag, I cannot complete the game. And, yes, I have given the photographer his completed album. Is it possible that I did things out of order? The only option I seem to have is to re-set the game and do things in a different order. I am positive I am looking at the correct screen, between where the photographer spirit lived and the reflecting pool. I have even used a magnifying glass. Please help so I don't have to start over. I want to get on to more of your games, which I am thoroughly enjoying.

Sorry the image for one of the puzzle pieces isn't working! (List item 10, puzzle pieces 22 and 23) Unfortunately, it's been such a long time since I wrote it that I no longer have the screenshot file, but here is a description from the walkthrough of where the puzzle pieces are located:

Puzzle Piece 23/99 is between the two trunks of the birch trees.

Hope that helps! Let me know if you still have trouble locating it :)