The Fishermen and the Worm

Our story starts out with a fisherman who falls down a hole. The rest of the fisher clan sees this, so when they decide he was a "chosen one", they all follow suit and fall into the same hole... where they started a whole new society gardening in the underground jungle. Sounds odd? Well that's just the beginning of this surreal free indie adventure made in RPGmaker. In The Fishermen and the Worm, by Geezerflakes, you have a party of three... two fishermen, who one day realize that they've never fished once in their life, or even seen water, so they climb to the surface to find some. The other member of your party is a worm named Deliah who agrees to be their guide on their strange adventure in some pretty terrifying lands. Like, really. I wouldn't label this game as purely 'horror' but there are some unsettling things, so players beware. In the beginning, things are pretty silly and random, and then the middle is... just terrifying and haunting, but still with its lighthearted humor. It's a perfect mix of the two, like salt on your ice cream. (Seriously try it. But only once cause that just ain't healthy) You'll have to give it some time to get moving, though, as the beginning can be a little slow, and the first few maps look like someone flung construction paper on a dirty rug. But once it picks up, you'll be able to enjoy all the madness and the brilliant story The Fishermen and the Worm tells. 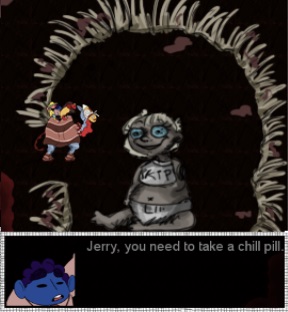 Unfortunately, there are some minor issues with the game. Sometimes you have to search around large maps trying to find where to go, hitting the [spacebar] on anything that looks useful, and it's rare that you can leave an area the same way you got in. Having random battles seem out of place, and in the first 3/4ths they are so easy you just have to press one button to get through them. Near the end, you can see why a battle system was put into play, but it could have survived without them. One thing the battles do, however, is show more of Geezerflakes's fantastic artwork. The character pictures are wonderful, and they all have an array of emotions. You can get attached to them solely by that, but their quirky personalities seal the deal. Fred No-neck fisherman is a pompous little narcissist with no filter, but you can't help but chuckle at his antics. While he starts off looking like the main character, things are not what they seem, especially in this fever dream of a game. Well, actually even the randomness of their world actually has reason. This is one story that as you play, you have more and more questions, and then on the way to the end it wraps it up all nicely, and with a little bow, too. The problems with The Fishermen and the Worm are quickly buried by all the positives, and even though the game takes around two hours to play through, you'll wish it had been longer. If you can just wait for it to warm up, you'll be taken on a fabulous adventure you'll be glad you went on.

watch out for bugs. I got stuck at one point:

on the fishing boat, after talking to everyone once I tried to go back in the cabin and got stuck on the "roof" unable to move.