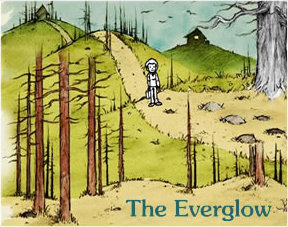 Polyphonic Spree did it with Quest for the Rest, and now a band called Mae is promoting their soon-to-be-released album, The Everglow, with a brand new Flash game.

The Everglow mixes original music from the band's new album with several short games to provide an entertaining interactive experience. Included is a match game, a whale riding action game, a jigsaw puzzle, and a couple of 'adventures'. Successful completion of each game rewards the player with video footage and mp3 files, containing one of their new songs as well as interviews with the band. Rewards are represented as coins in a briefcase that can be opened and revisited at anytime. Click.

While the idea is sound—pardon the pun—the execution of this multimedia promotional tool has a few quirks. Although the adventures are of the popular point-and-click variety, the main character is the only clickable element in them most of the time. And I am still unsure how to complete the first adventure, or why there are two coins in the briefcase for each. The games are cute and include pretty hand-drawn graphics, and yet the gameplay is simple, ordinary, and uninspired.

So why am I including it here? Well, it's about the music, which is exceptional, and I am glad my friend Andy recommended it to me. Furthermore, I believe it is logical to predict we will see many more Web games like this in the future that promote independent music groups. As the antiquated business model between the big old record labels and the artist is redefined in this digital age, artists struggling for recognition will need to drive traffic to their sites to help drive music sales. And what better way is there than with a Flash game. =)

"And I am still unsure how to complete the first adventure, or why there are two coins in the briefcase for each. "...

*hint* On the first adventure, after the long walk from his house, he needs a rest, but the ground is too bumpy. Secondly, he sure doesn't want to take the long way over to the whale. Look at the broken tree stump.

In the second, The fire flies are important.

When the character stops (but not everytime he stops), other items become clickable. There are two *hidden* things you have to do in the first adventure, and only one *hidden* thing in the second. By hidden I mean that you don't have to do it and you can complete the game without it (but you won't get the coins).

Ahh, well now I understand. And I'm glad you guys are around to help me out. =)

I've compelete a bunch of tasks and I keep getting messages that I've received a new coin, but when I open the case, there's just one blue coin in the upper left corner!? Am I doing something wrong?

Yeah, that happened to me, too. Closing then opening the case seemed to work for me. Also, if you complete the same task again, it will say a coin was added, even if you had it already.

did anyone pass the rocks, in the part you have to collect the books with the whale? I always hit one of these rocks!! So I never pass the first adventure

Click 3 rocks and he'll sleep under the tree.Click the dead tree and it'll fall down for him to walk across.

does anyone know how to do the whale part. it's so hard. or do you just have to keep trying.

Shelly, you just have to keep trying, and eventually you will learn the path to take. The first time I played it I managed to get through it. Then I tried it again later, and it took me many times to get right.

ummm i put the puzzle together and nothing happened.. what do i do!

I can't seem to get the puzzle right. I try to rotate the pieces, but they wil only flip 180 degrees, when I need them to rotate 90 degrees. Any pointers?

the picture of what the puzzle looks like is the main character's face under the "help" button. when the puzzle is done correctly, the level advance sound will occur and the red and blue book from the memory game will show up and say "welcome to the everglow. feel free to replay the game as much as you want" and then you go back to the title menu except if you've done all the tasks (clicking the rocks out of the way so he can nap and then knocking down the tree, in the first level)(collecting the fireflies until the girl in the middle is illuminated, in the third level). if not, you can always go back and replay the game. enjoy.

AAH HELP THE WHALE PART IS SO EFFIN HARD!!!! CAN SOMEONE PLEASEEEEE TELL ME THE PATH YOU HAVE TO TAKE??!?!?!?!?

Wow, this is neat... I love this site for the games that I play for hours on end, but to see one of my favorite bands featured on this? Awesome. Mad props to you for your site, and now for your good taste in music. Thanks for helping spread the word.

WOOT~! Beat it AND got all the coins. That was fun, AND the music rox. Gotta get me the CD now. XD

w00t w00t got 'em all! =) I rather like this game, but it would be neater if it had a little cinematic scene at the end of each clip that shows you what the whole point of what you just did was. Mebbe a little skip and a cheer? =)

This was great! The first blue coin showed me a scene in my own town of Norfolk, VA at the Norva (one of the cooler venues)

but i had a hard time with the memory game. =\

Ugh... wery difficult.
I only got to level 2 before I went mad.

This puzzle is ridiculous when you have to rotate the pieces. This game isn't really calming me. It's frustrating.

Someone please just tell me how to beat the whale level i have tried every possible path!

I can't get past that part either ("the part which the bramble keeps growing") I'd played this game several years back and can't remember how I got past this part. I do remember completing the game, though. Can anyone give me some pointers on what to do. I've just simply forgot.

dances_with_syne : at the bramble part I just kept clicking, and when they were all down clicked the person. It didn't take long but maybe I just got lucky. Hope this helps if you happen to look back over a year later..