Turns out it wasn't nuclear fallout that brought around the end of the world... it was the simultaneous eruption of every volcano on the planet. Morgan and his family barely survived the apocalypse that plunged the world into a dangerous new era of ash and mystery, but one year later, they're still scavenging, still surviving. Until the day Morgan's entire family vanishes into thin air, and the only clue he has to go on is the cryptic final words of his father, "The Eighth Continent". In this massive text-based RPG adventure written by Patrick Garrett, with illustrations by Kate and Ben Garrett as well as music by fErDi0nE, that's free for iOS and Android, your decisions will guide Morgan through this strange and dangerous new world in search of his family. With a card-based combat system, minigames, (both optionally skippable) and over two thousand pages of branching storytelling with multiple endings, it's a meaty Choose Your Own Adventure style narrative with serious depth, though players should be warned it ends rather abruptly as it's the first part of a planned trilogy. 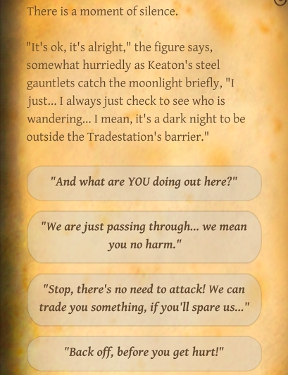 For the most part, The Eighth Continent is relatively straightforward to play. Swipe to turn pages, and tap on choices to make the decisions you like. You may see more options depending on what you're carrying or what else you've done throughout the game, but think carefully, because everything you do impacts the game in some way. Often, it comes down to impacting Morgan's physical or mental health, both of which are represented by meters at the top of the screen. If either runs out, it's game over, so while they may fluctuate significantly based on your choices, try to keep them up by making good decisions, or using healing items. Morgan will find a lot of items throughout the game, some of which are relevant to the plot, while others have healing or other uses, such as the battery, which is used to play the hacking minigame to open doors. 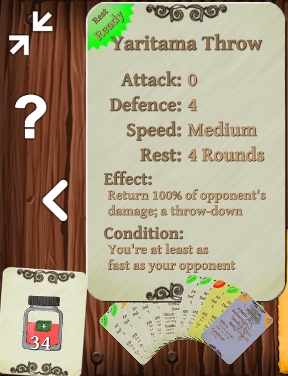 If you get into a scrap, which happens periodically throughout the game, you'll enter into turn-based combat. You'll attack and defend using the cards you find on your travels that represent various moves, trying to overpower and outmaneuver your enemy to deplete their health before they get yours. Cards have attack and defense ratings, a speed that determines who acts first, and some have special conditions that activate depending on how the clash goes. Most all cards have cooldowns of a few rounds before you can use them again, and some are only useable a few times per battle, so study the cards your opponent plays and think carefully. The game makes use of a checkpoint system to save your progress, but you can also save it manually whenever you like. The combat itself is an interesting system, simple but allowing for more thought than your average turn-based system. There are no random encounters, so every situation feels unique, something to think and plan your way through rather than endure. Interactive fiction fans who simply want to sink into the story might find elements like these a distraction (you can enable a "skip" option to automatically win them from the main menu settings!), but they do make The Eighth Continent feel more like its own beast. 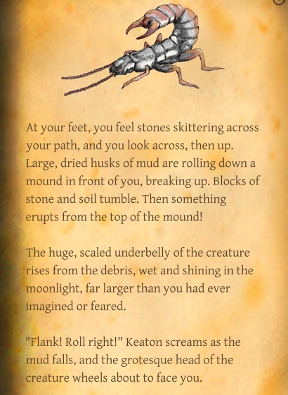 To say The Eighth Continent is ambitious is a huge understatement, given both its production values, and how much of it there is. There's so much to see, so many choices to make, that you can lose yourself in it for a long time. The minigames are... there. They exist. They're a little simplistic to really add to the experience, and they can pop up often enough to be annoying if you don't like them, since hacking (essentially Pipe Mania) and scavenging (match-3) are how you get the most helpful loot and items, though if you snoop around in the settings on the main menu you can actually find a setting to make minigames skippable. If you're playing the free version, this is also where the ads can get really annoying. They're not frequent, but they do appear without warning, and some of them can force you to replay a minigame you just finished, which makes sitting through a video ad (though many are skippable) all the more grating.

One thing that's also a little odd is the decision to make the protagonist a male. If he's supposed to be "you", as the text describes your actions, and his gender doesn't have anything to do with the story, it might have been more immersive to simply offer an option to choose your gender and have the pronouns change accordingly, particularly since Morgan is a unisex name. Still, The Eighth Continent is a surprisingly engrossing narrative thanks to some very solid writing and (optional) music and subtle animation that sucks you into the atmosphere. The main mystery, that of what, exactly, the "Eighth Continent" is, and how Morgan's parents vanished, is just the tip of the iceberg in a tantalizing world filled with new dangers and places to explore. Where it can get frustrating is that it doesn't always feel like choices are logical or intuitive... there are a lot of situations whose outcomes you just can't predict or think through that can lead you to injury or otherwise negative consequences, and as a result, it can feel more like the game is shepherding you behind the scenes to the paths it wants you to take than the abundance of choice would suggest. On the other hand, what a journey it is. It leans more towards the "action-packed adventure" end of the spectrum, but it's full of tense encounters, haunting descriptions, and the ability to electrocute yourself while harvesting giant dead bugs. If you love interactive fiction, The Eighth Continent is a beautifully presented, powerhouse of a game that's packed with replay value and deserves your attention... though hopefully the second installment isn't far off!

It's engrossing so far, and surprisingly difficult! The combat is rather strategic and I keep failing either because my health or mind bars run out. Definitely worth a shot. Would also appreciate any tips and tricks — I might be doing something wrong with my record of failures.

Hi there! What sort of failures are you encountering? Do you mean in combat or during gameplay?

Personally, I made sure to always scavenge when I could to keep my Hack high, and always buy cards or unique items when I saw them. You can't backtrack to a vendor, so buy whatever they have beyond simple healing items... buy any cards, special items that could have functional use (rope), and stock up on candies to keep your mental health up. Try and keep a reserve of at least 20 Hack on you. Again, if you scavenge whenever you get the chance, you'll have a lot of cash and find a lot of healing items, not to mention pick up special items that can help later on.

When making choices, try to go for options that are cautious but still assertive. The game seems to punish you with losing mental or physical health if you play like a jerk or rush into things. Be polite to people, and respectful, but stay on guard. Following Keaton's lead is USUALLY a good bet, and saying things to him that come across as accusatory or rude will have a negative effect on your mental health. If you're prompted to use an item you're carrying as an option, that's USUALLY the best option to take.

During combat, you'll see a visible representation of the card your enemy is about to play only every other round. As a result, it's best to save your most powerful/fast cards for when you can see how they're going to be stacked up against your foe. Pay attention to special effects, and don't rely just on attack and defensive power... speed is important in triggering most cards' special conditions, so keep the speed of whatever card your enemy is playing against you in mind. A lot of fights will have special cards unique to that situation (like temporarily teaming up with Keaton), so take your time to pick your cards, and try to pay attention to the cards your enemy is playing too. After a few rounds, you'll have an idea of what they have in their deck, and will be able to pick the best card to counter their strongest attacks and abilities. Remember that THEY have to wait to reuse cards too! Since bandages can only be used immediately after battle, use them to heal when prompted if need be, and use healing items to keep your health up before you start the fight.

I hope that helps!

Gosh thanks so much for that really detailed and informative post! And for introducing such a good free game. Yeah I was referring to just general failures at progressing in game.

I usually lose patience with keeping track of enemy cards, that loses me health. And I am afraid of scavenging sometimes when mind points and supplies are low, because I do fail sometimes. Will keep your pointers in mind!

Thanks for this excellent review, I can't believe I've not seen it until now! Thanks a lot for playing and becoming so well versed on the intricacies of the game, it's impressive and very flattering!

My fav line was: 'it's full of tense encounters, haunting descriptions, and the ability to electrocute yourself while harvesting giant dead bugs.'