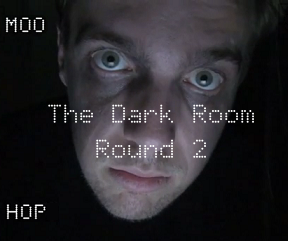 Did you really think that you had truly escaped The Dark Room? Fool! Simpleton! Clod! You have but crashed through the floor into what can only be described as a Darker Room! And your ankle is broken! How about that? And your actions are probably just going to fracture it further! Commandingly Deep-Voiced Australian comedian John Robertson is back to taunt you a second time, as you try to escape The Dark Room: Round 2, a continuation of his darkly-comedic YouTube puzzle adventure. The rules are the same as before: make choices by clicking on the highlighted annotations, and be confounded by the illogic of it all. Robertson's commentary seems a bit angrier this time around, but it is no less hilarious to slink from dead-end to dead-end, being castigated all the while. And also, as before, one of the paths will lead you to the possibility of a super-best ending whose solution we're probably going to need to crowd-source. All in all, The Dark Room: Round 2 has all the elements to brighten your day. But your day will not be brightened because you're in a dark room.

Play The Dark Room: Round 2

Use the link to start the second chapter

You mean I'm not alone?

As of this walkthrough trying to repent for the murder still has no new link update. Also, the Hidden Message is a url for the ultimate win, which is still being deciphered.

YES! Thanks for uploading the second round. :) Unfortunately, I'm still stuck on the URL puzzle. You know, the puzzle with "cup of milk and water, chinese house" and all that. Anyone got any clues?

Well, while I'm here, I guess I can help out with some Easter Eggs. OK, here goes.
EASTER EGGS
(I think I'll just do these in alphabetical order)
Apple:

1.Look up
2.Painkillers
3.Can I get a prescription?
4.Blank annotation in bottom-right corner.

...Well that went more quickly then I thought it would.

It looks like the cup of milk speech is a

but I haven't worked out the specifics of it yet.

So... is it finished? cuz I don't want to start The Dark Room 2 again to have it lead me to "this page will be here in the future"...

I think the milk speech is definitely

Taking the first letter of each word gives you http://www.youtube.com/watch/?v= which is how youtube videos are addressed.

and then, my transcription is:
four big gods cursing your other xylophone minus zero new muscular tutus

4bgcyoxm0nmt, but isn't (too many letters). I think the "minus zero" might mean something else. Also, the way youtube randomly capitalizes letters could make this difficult.

I assumed when he said "big" he meant the G was capital. At the start he says "small victory equals" which we know is meant to be "v=", not "sv=". The case in a video's code does indeed matter.

Also, when he says "minus" he might mean it includes a dash. Youtube videos do sometimes include dashes and inderscores.

The code I got from this was "http://www.youtube.com/watch?v=fGcyox-0nmt" but it does not work.

In the previous game he helped out people having trouble with the URL in the Youtube comments. I'm hoping he comes back and does it again. I'm also hoping that this isn't just a red herring.

Use the link to start the second chapter

You mean I'm not alone?

As of this walkthrough trying to repent for the murder still has no new link update. Also, the Hidden Message is a url for the ultimate win, which is still being deciphered.

@Alex and Argy- The four gods could also mean GGGG or gggg or fG or FG. There are so many combinations of what it could be but many of the JiG team are trying to puzzle it out. Hopefully we'll have an answer soon!

@edennov: No, unfortunately, it does not appear to be completely finished. As of right now if you try to repent for killing it goes to a video saying that path is not yet up and to wait. Also, the ultimate ending url is still trying to be figured out.

Thanks everyone for being so helpful and be assured we'll let you know the minute we unravel the url!

Four big gods could be GGGG, cursing your other xylophone minus zero could be cyox_0.
Yeah, I used an underscore. I think he says minus to throw us off the trail, when he really means "underscore". Maybe. And since he stares concentratingly on you and says, "new muscular tutus, he might mean NM and tutus means 22's or 22.

So here's what I have:

Unfortunately, I doesn't seem to look like the correct link. (In the preview.) :(

A couple of things that might be worth thinking about:

- Unless something's changed, youtube urls have exactly 11 characters. Any combination with more or less won't work.

- As was pointed out, Robertson was really helpful with tips on the first game. People have been posting on the hidden message page for three weeks now, and he's said nothing so far.

- I cobbled together a script that went through all the suggestions I've seen here (e.g., "4", "f", "F", "GGGG", "gggg" for the first characters) and tried all valid combinations. 434 combinations, all give 404 errors. If anyone's interested, I can list the various things I combined (and I'll take suggestions on changes).

And of course, none of this would be worthwhile without Robertson's incredible over the top delivery. I can't read the first few sentences of this review without hearing his voice.

I had to make all text really small and the page really big in order to fit everything.

Forgot to mention that in my walkthrough, I shortened the clips that only have one option to their final conclusion, to save time and space.

I noticed that the url of the Hidden Message video kind of represents what he's saying, backwards. It starts with Mn0 and ends with G4. I don't think this is a coincidence but I can't think of anything to do with this, short of reversing the combination of characters, which I've already tried.

Has there been any further progress on deciphering the Hidden Message?

If anyone is still attempting this I am also and could possibly over skype or facebook work on it together...

WTF?? Still only 2 people who got to the end? What's the damn trick here!?

Anyone else find the 'My Little Pony' easter egg?

Found another one.
Dog Whistle

Hey, um, just something I found... In one of the videos:

after going
Look up -> bag -> abandon hope -> wait... what?!
You get to a video that tells you 'the dark room is not in q8.
Could q8 be part of the mystery URL? I've seen some theories on what the 'wait' (or 'weight') part of the hidden message is, and I just thought I'd put it out there.