[Warning: People with certain sensitivities be advised that this game contains an option to commit suicide.]

Ben "Yahtzee" Croshaw draws inspiration for everything from indie hit Faster Than Light and cult classic Eternal Darkness: Sanity's Requiem for his roguelike survival horror adventure game The Consuming Shadow. Currently playable for free in Beta, the game stars you as humanity's last hope to perform a ritual to banish an ancient god whose shadow is slowly consuming the world... but the catch is, you're not sure which god it is, and banishing the wrong one would be disastrous. The only option you have is to drive from town to town, investigating rumors, taking odd jobs, and clearing out places the evil has infested, but the clock is literally ticking. Every action you take takes time, and with only 72 hours remaining before the world is swallowed by darkness, you don't have a lot of it. You'll need to work fast, but balance your health and even your sanity, as you search a landscape ravaged by desperate, terrified people and dark forces. Oh, and did we mention? The game is randomized every time you play, so don't expect to quit after a run of bad luck and have everything be all hunky-dory because you think you know where everything is, you filthy cheater. 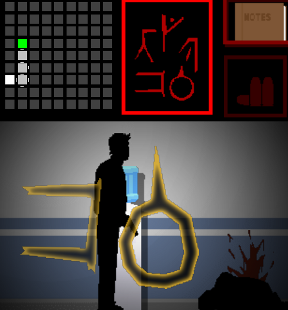 A lot of the basic gameplay plays out something like a choose-your-own-adventure text game. From your car's trusty GPS, you'll select and travel to destinations, and in towns you'll have a handful of options to choose from, like getting medical attention, finding people to sell you supplies, or looking for work. A town marked with red is a potentially hostile place with a dungeon to explore, location that's green is somewhere safe(ish) you can find goods and services in, and an orange location is a place you have an objective in. All manner of random events can pop up, and how you decide to deal with them can have unexpected outcomes. A family member might text with an encouraging message or whatever funds they can spare... but they also might insist you're delusion and plead for you to seek help. All you can do is keep hunting for clues by examining everything you can and searching everywhere, but if you fail, don't worry. Based on whatever you accomplished before you died, the game will grant you experience points, and whenever you level up, you're granted upgrade tokens you can spend on improving everything from your maximum health and sanity to your initially abysmal ammo capacity for your next playthroughs.

Your ultimate goal is to both figure out the components of the ritual needed to banish the god invading the world, as well as which of three unspeakable entities that god is. Both the god responsible, and their colour and runes, change on each playthrough. In dungeons, towns that have been overcome by the shadow, you can find a variety of clues. It might be a rune scrawled on the wall whose meaning and target might help you contextually figure out the relationships between the deities or what they stand for, or it might be a scrap of journal or ancient text that more bluntly spells out a portion of the information you need. Your notes and spellbook will keep track of these more obvious clues for you, but you might want to jot down the colours and meanings of the runes you find on your own. When you have the ritual and the god, or at least think you have enough to make an educated guess, you'll need to head to Stonehenge and fight your way through it to cast the spell. 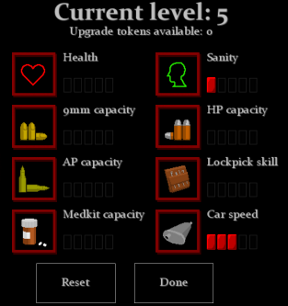 When you enter a "dungeon", the game switches to a side-scrolling view where you can use [WASD] to move around, or click the onscreen arrows to do so too. These are the dangerous places where you'll have to deal with monsters, and if you didn't stock up on ammo you'll learn how hazardous kicking a crawling flesh beast to death is. You can leave a room without killing the monsters in it, but your mental health will take a hit. Sanity can be your biggest enemy as it decreases from certain events, and low sanity might lead your character to struggle in general, and even consider taking their own life rather than battle with literal demons. Still, if you want to try casting spells, during dungeon exploration click on the circle of runes, select in order the runes you wish to use, and then click the play screen to cast. While some spells can have beneficial abilities, all of them cost you some sanity to cast, and discovering a spell as part of a dungeon's treasure is safer than experimenting with runes and hoping to stumble across something.

Analysis: The Consuming Shadow is one of those games whose difficulty primarily comes from its randomised roguelike elements, since it's impossible to predict how something is going to go for you. That twitchy guy who wants a ride could turn out to be a needy soul who will repay your kindness, or he could steal your car and dump you bruised on the side of the road, and you won't know unless you take the chance. Frustrating? Sure, but it's also tense and realistic, aside from being a staple of the genre, and helps create an atmosphere of paranoia and self doubt. Considering you spend so much time staring at the road, it's a remarkably creepy game, and one that relies on suggestion to scare more than anything else. Yahtzee has always excelled at crafting frightening worlds and scenarios with just a few lines, and The Consuming Shadow is no exception. 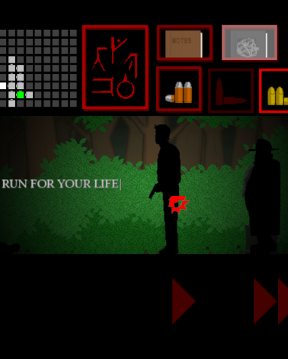 At first blush, gameplay seems a little clunky when you're exploring and fighting in dungeons. It takes a bit to nail the timing when firing so you don't waste bullets, which you definitely don't want since melee is... awkward... and even then combat still feels more like a chore than anything else. After a while it all starts to feel a bit repetitive. There are never really any surprises to be had in the dungeons once you've played a bit, and at the moment there's only a handful of random text options for any given situation, so you'll start to see repeats before long. Perhaps most tedious of all is the suicide function, which just starts to get annoying rather than tense as it starts to crop up with increasing frequency and no difference throughout and loses the weight it might otherwise carry as a result.

Of course, the game is still in Beta, and Yahtzee is currently looking for feedback on how to improve and expand it. Being able to see where a job location is in relation to you before you accept it would be handy so you don't need to memorize the map. Likewise, letting you plot a course through several different towns to a destination that's farther away would cut down on tedious clicking and menu re-navigation. Mostly, however, it just feels as if the dungeons need to be fleshed out with more elements to make them more interesting... puzzles, random occurrences, quick time events... uh, maybe not that last one.

In spite of its early state, however, The Consuming Shadow is still an engrossing and engaging horror game that manages to be far more unsettling than most. The decision to leave the monsters in silhouette is incredibly effective, moreso than if they had been fully illuminated, and the range of disgusting to downright terrifying (such as the "special" monsters) is handled well. The text and mood effectively craft an atmosphere of loneliness and desperation as you drive through the dark and hostile countryside, and assembling the ritual components as well as sussing out the contextual clues makes you feel like a proper clever hero when you figure things out. And the unexpected ally at the MoO? Great touch for fans of Yahtzee's earlier work. Though it clearly has a ways to go before its done, for its flaws The Consuming Shadow manages to be an arresting and unique experience you'll want to keep coming back to, and one we can't wait to see more of in the future.

You can hold down Shift to run in dungeons. Makes life a lot easier.

I played the hell out of this when it was new, and I'm eagerly awaiting the full release.

Plenty of issues, but nothing game-breaking, and they're all pretty much just minor fixes. I'd recommend this to anyone with interest in horror games, regardless of past experience.