I'd like to take a moment with you to address a deeply tragic and completely serious epidemic in our society today. I'm referring of course to the problem of derivative game design concepts.Despite the overwhelming flurry of game titles about competitive burglary we've seen hitting the market recently, developer Jason Rohrer has brought us The Castle Doctrine, a massively multiplayer defense strategy game about home invasion most likely inspired by the same event in the Nefarious Olympics, just as we've seen from other developers with all the games about Team Hostage Mumbleypeg, Marathon Relay Shoplifting and of course Synchronized Nun Tripping. 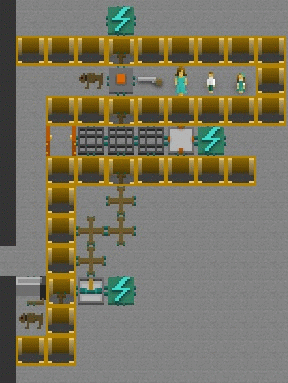 The Castle Doctrine has you preparing an elaborate Rube Goldbergesque system of home defenses to protect your valuables — and your family I guess — from a home invasion. With a budget of $2,000, you'll be laying out a floorplan of components with everything from electrified floors to sensor pressure plates to huge snarling dogs that will hunt down intruders, to circuitry needed to make it all work. Lay out some walls to send the intruder down a deadly maze. Buy your wife a shotgun and put windows in strategic places to enable her to chase down the intruders. Put a pressure plate on the far side of a closed door, so that when the intruder comes it freaks out the cat, which goes off in the opposite direction and sets it off. If your planning was effective, all this could prompt the other players who've decided to break in to leave your house quietly and your valuables and loved ones in peace. Slightly better is to devise a way to fry them where they stand though, as you'll receive whatever cash they've got and they'll have to start over with a new house and character, to build their home defenses anew. Your design options are many and varied, and the ways you can combine them allow you to concoct some pretty cunning traps. A catalog of wonderful — and wonderfully deadly — surprises is only mouse click away, and the sky's the limit! Or rather, $2,000 is the limit. 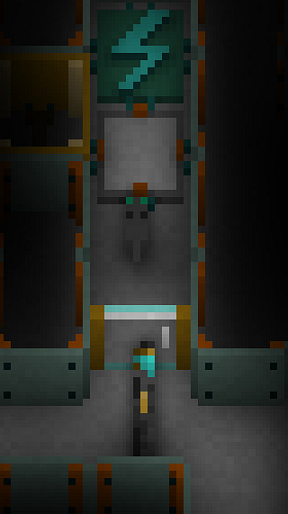 But it doesn't have to be. Just as you rake in the cash of any intruders that were foolish enough to zig when they should have zagged, you have the ability to go around the neighborhood and break into other peoples' houses. (Kids, don't try this at home! Or perhaps, only try this at home. I... I just don't know anymore.) Provided you don't end up as a slightly tacky substance on somebody's electrified floor (gosh I hope those things are Teflon-coated) or as burglar tartare for their bruiser of an attack dog, you should be able to make it to their vault and use any cash or equipment you find to improve your own home defenses. You can even purchase equipment to make your break-ins easier — albeit at prices that pretty much guarantee a career in burglary will become necessary to keep up the habit. Tired of all those walls forcing you to go about someone's layout their way? Buy a one-shot handsaw and take out a chunk of their wall. Hesitant about what that closed door conceals? Buy a brick in advance and you can lob it through the door to open it. Big growly dogs aren't so much of a problem when you drop a slab of drugged meat after you. Don't let the fact that if it weren't for people raiding other peoples' homes none of this would have become necessary in the first place stop you. Someone is obviously making a bundle off the sale of all that elaborate home defense equipment, as well as all that break-in gear. So as long you're fine with being part of the whole burglary-industrial complex, go nuts!

Analysis: It's tempting at first to think of The Castle Doctrine as just another tower defense game, just as you'd find in a plethora of browser games, and wonder why someone would make a commercial version. After a little bit of play though, you begin to discover just how original and cunningly-developed it is. The developer got the inspiration for The Castle Doctrine as the result of a traumatic real-life experience, and has put quite a lot of thought into his work. For instance, the addition of in-game value attached to your character's wife in order to provide a reason in terms of game mechanics for players to provide for their safety. The later addition of the ability to buy a shotgun for your wife to wield, so that your family members aren't merely passive NPCs that dash toward the nearest path to the exit when players invade. 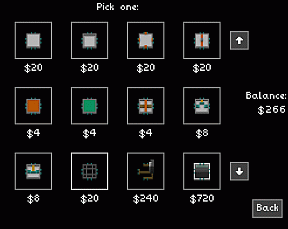 With its colorful but simple, pixelated look it would be easy to pass this one by with hardly a moment's thought, but we chose to feature The Castle Doctrine because for many players the value is quite definitely there. This is a tinker's delight, an engineer's fantasy. If you've ever spent an evening in Minecraft fine-tuning your redstone circuitry only to gasp when you noticed the sky outside your window getting brighter, this one's for you — and they don't come along very often. The game's elements provide for some highly-sophisticated trap mechanics, and it's fascinating to see what the player community has developed with the provided components... as well as the counter-strategies that have been devised by players taking the offensive role.

The net result is a living, growing system of development among a thriving online community of fans. Because strategies that are in vogue today will have become useless as counter-strategies emerge a few weeks from now, the game is never the same thing it once was. Since buying the game includes a permanent membership on its servers, the $15.99USD purchase price gives you lifetime access to a unique gaming environment, a community of in-game developers and a hobby that never has to end... and that's a lot to ask of anything for less than $20.

Thank you, glad you guys enjoyed it. =)