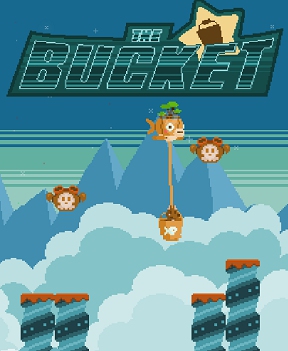 If there's one thing that every well-educated fish learned in school, it was that you should always take care of your raccoons. Just think about it. Raccoons live in perfect symbiosis with fish that carry buckets on ropes and sprout trees from their backs, right? At the very least, that's the logic behind Nitrome's latest feature, The Bucket, which combines a twist of physics with a bit of avoidance action.

Using the mouse to move around, you control a fish carrying a long rope with a bucket attached to it. In each level, you must safely transport the raccoon using your basket to the opposite end of the level. However, the rope connecting your cargo to your carp can flop around and swing in the breeze, so keeping the raccoon on board quickly becomes a challenge. If the raccoon should fall out of the basket, land the basket near him so he can jump back in before he falls too far off the screen, or else it's game over.

To complicate matters further, you've also got to navigate your fish through unfriendly terrain. Waterfalls will slow down all motion, fans will blow the basket (and sometimes the raccoon) out of control, and blocks need to be pushed out of the way or slammed into to move further. Also, an unkind batch of enemies await their opportunity to attack you in different ways. While the fish and the basket can take numerous hits (although they get jarred rather easily), the raccoon can only last for three hits before the round is lost. Add to all of this the screen's tendency to automatically scroll at a rate that speeds up and slows down often when you least want it to, and you've got quite a challenge ahead of you! 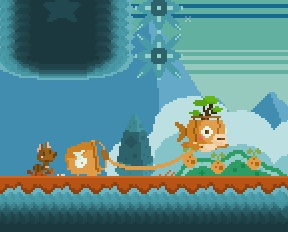 Analysis: As a piece of advice and as a warning, it should be mentioned up front that this game takes a lot of patience to conquer. At first, you'll be learning what elements in the game you can interact with or move through, or how wind and water and other elements effect your movement. Once you figure that out, there's still the task of learning how to move without dumping the raccoon into a bottomless pit. Slow, careful movements are the key here, as anything wild or jerky could fling the raccoon off the screen, if it even stays in the basket that long. On the plus side, you're given the benefit of checkpoints scattered throughout longer levels, though expect to go through a good number of obstacles before you reach them.

Ultimately, The Bucket is still great fun once you get the hang of the helium herring. The twenty levels provide plenty of challenges that take a bit of foresight to navigate without risking the raccoon's safety. Each successful rescue is a satisfying experience, as you know you've done your solemn duty as a fish to provide transportation for your four-legged friends.

Thanks to Noah for sending this one in!

As I predicted, nitrome is following the old console theme.
Can't wait to play it.

I wonder which of their Enjoyment System games Nitrome intends to "port" next. While some of them are essentially demakes of games they've already got, who doesn't enjoy a good demake?

Kind of fun but the fun ended at the wind levels.

:D Nitrome brakes my brain once again: why are there so many waterfalls, why does the racoon get hurt only sometimes when its in the bucket, and why does it have to be called "The Bucket"?!
But it is a nice game.

WEIRDEST. GAME. EVER.
A raccoon being carried by a fish with a tree in its head :o

Side scrollers arn't my thing but this was pretty good

One portion of Level 15 has me completely stuck.

I dunno. Nitrome games are getting to be like a long running TV series that's getting stale. At least the difficulty level is high enough to make it challenging and the fish-tree-thing is fun :-)

ugh. nitrome games have been on a serious downward spiral... they've only had two good games for months: sky serpents and worm food.

This is like something I tried to do in Incredibots, only with more stuff. But I think mine was actually based off of Skywire. Hey, that's by Nitrome too, isn't it? THEY'RE RECYCLING CONCEPTS!!

I don't know where Nitrome going here, but I liked this one (it was a bit late for the new year though). Maybe they're having a priority change?

I love the adorable artwork and music that goes with it, and yes, the ending I find very satisfying. Level 15, however, has me in utter frustration. All those spikes, and then the wind maks it hard to maneuver the bucket.

I tried to push against the wind and concentrate more on the fish, and that seemed to work halfway for me, until I bumped into a million spikes or so. The best way to pass this obstacle, I suppose, is to simply not hit anything. Simple, maybe.

Personally, I also would have liked it if the checkpoints were more closer together. I would much rather start from the places I have constant trouble with.

Nitrome used to make brilliant games but now it is making games which is bad.Honestly man what has happened to you. You used to make sick games and now you make horrible games. honestly lads you are going down. (NePaL

Every time I come to a jayisgames review of Nitrome, I always see the 'Nitrome is in decline etc' posts. I always tend to think what they really mean is 'Nitrome games are becoming too hard for me.'

Nice game, and Nitrome is not in any sort of decline in my opinion.

The raccoon goes through the lower tunnel, between two air lines (try to place the bucket carefully, because if it goes too high or too low, into one of the winds, it will fly onto spikes). You can also move the fish forward (slowly) while the bucket is between the winds.