The Bear of Love 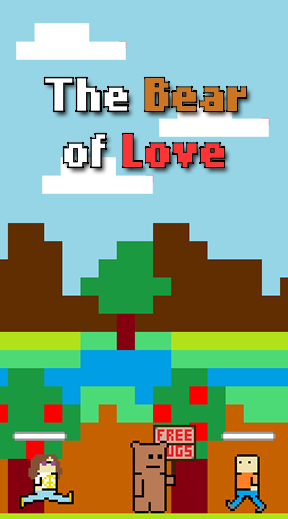 Look up "bear hug jokes" on google and you'll get the following quote from an old British politician: "Once the bear's hug has got you, it is apt to be for keeps." Keep that in mind when you play The Bear of Love, a new tongue-in-cheek action game from LeBrancher and rzafael, inspired by a tweet from a fictitious British dude, Peter Molydeux.

In this zany little simple idea game, you play a bear who needs to hug people in order to breath, creating a form of photo-hug-synthesis that will have scientists baffled for decades. But there's a catch: you tend to come on too strong and end up killing those you hug when you don't pull away in time. Press [Z] to lay on your bear hug, [X] to open up the upgrade shop, where you can buy more friendly outfits and signage to be less scary to your potential hugees. While in the shop, you can press [Z] to buy an item and [X] to close the window. But, be careful! Your oxygen levels will continue to drop while you are in the shop, so if you aren't careful, you can die.

Bear of Love features some great 8-bit pixel art and the funny upgrades and animations will have you chortling to yourself long after the five or ten minutes it takes to finish, but it was made in 48 hours for a Molyjam competition, so it has some flaws. It feels repetitive after a few minutes and there isn't a lot of strategy involved. But, really, the game isn't meant to be anything more than a funny way to spend a few minutes, ideally on a Monday morning, five minutes after coming into work.

Play The Bear of Love

It appears to quietly reference another UK gaming identity with the Top Hat and monocle upgrade.

Pretty silly but for something from a game jam it's fine.

This game (actually, the whole Molyjam event) was not inspired by Peter Molyneux, but by the fictitious parody character "Peter Molydeux", who takes the real Molyneux's random, ineffable musings to whole new levels of avant-garde wackiness.

If you want to see a pen-and-paper take on this game concept, try Vampire: The Masquerade.

@Kiteserpent, Thanks for setting me straight!

There's a panda costume option... but everyone who's played a Detarou game knows to run way far away from pandas.

There are so many puns and references to be made here, I can't hold them in any more; but I'll spare you the actual "jokes" and just give you a couple of references instead, graciously allowing you to make up funnier jokes in your head;

A cute little game that I won't be sharing with my 8 year old; with no "ending", she'd be playing the music for hours, and then I'd want to hug her really hard (just kidding about that part, folks!)

@CrankYanker: There is actually an ending. If you walk all the way to the right end of the screen you'll see

a man in dark glasses (is he blind?) who isn't frightened and just lets you keep hugging him. Your love bar gets ridiculous amounts of points, and then the game ends. He's the guy walking with you at the menu screen.

What I thought was interesting was that I didn't get punished for scaring people to death.

Due to the man's apparent blindness (dark glasses and whatnot), I sensed a sort of Bride of Frankenstein situation, where the only friend of the monster (or bear) is someone who can't see the monster's (or bear's) face.