The Battle of Polytopia

Heed us, readers! Our words are backed with CUTE VOXEL GRAPHICS and SOOTHING BLIPPY CHIPTUNES! [We've found that's much easier on the floors around here than nuclear weapons.] Midjiwan reinvigorates Sid Meier's Civilization-like turn-based strategy and resource management gameplay for Android and iOS and gives it a sleek mobile interface, voxelized graphics, a refreshing chiptune soundtrack and chibikkoi cast of adorably tiny characters. Games usually last thirty turns in Perfection mode, but the option for Domination mode will let you keep playing long enough to become the undisputed ruler of the realm — or to research all the techs and build all the turf improvements until you're satisfied with your infrastructure or score. Polytopia even comes with a 'Pass & Play' mode that lets you play multiplayer with your friends locally until you don't have any left! 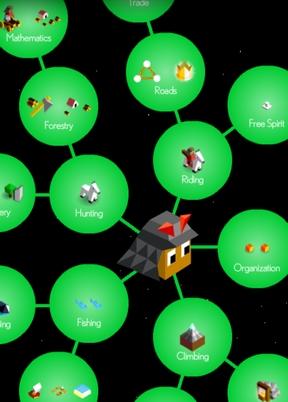 Civilization players will feel right at home with this one. Improve the lands surrounding your towns, grow them, expand your territory, and eventually conquer the competing empires! Choose which nation you'll command; each has their own starting ability of one select pre-researched technology, and their own look — not just their buildings and units look distinct, but so does their land! Most are loosely based on real-world civilizations but some are more whimsical, and it's buying additional civilizations to play with that's basis for the game's microtransactions. This means that free gameplay is completely unhindered, you just don't get all the spiffy different looks. Graphics aside, we were mildly disappointed with the same-y civilizations in terms of actual gameplay; the only major difference between them is which pre-researched technology they come with, and the technologies are slimmed down enough for quick gameplay that it won't take long to research it regardless. It makes sense to simplify a genre for mobile devices, but we're hopeful that Polytopia will elaborate on its own theme, particularly embellishing a bit more on the technologies, as it matures. That said the gameplay is still enough to keep each playthrough new and interesting and the look-and-feel definitely sell it. We were pleasantly surprised to find that Polytopia even plays nicely on older Android phones — even those running 2.0 - 2.2 of the Android OS! — making it a cute, quick civilization game you can keep on you and play for free whenever you get the urge to build a thriving society of your very own!

This game is fantastic - the 30-turn mode is an excellent bite-sized time commitment and it offers enough Civ-style complexity to make it challenging and entertaining. Played on an iPad it's an excellent way to kill 15-25 minutes. Haven't tried the open-ended mode yet, but i'd expect it to be equally satisfying. At least in the easy level 30 turns is just about right to complete the game anyway. Great game!

The game is wonderful, been sort of playing it the whole week.
BUT, and that's a big but, It keeps crushing. I never finished a game. whenever the game progresses at some point it will crush.
I'm using a Samsung Galaxy Note 4. You really should fix it

We are aware of this bug which exists not only on Samsung Galaxy note 4. We offered our help to the developers to bring the game at a higher level/standard but they declined it.

Well I wish they would fix it. Id love to pay for full content.

Thanks for the hands up!
Very sorry about the super late reply - I am Midjitoo, a new PR and Communications manager at Midjiwan, the creator of The Battle of Polytopia.
Glad to share the news that Polytopia will be launched as multiplayer cross platform in the middle of January 2018.

Keep playing and good things will come your way!

Thanks for the feedback! I know its super late. I am Midjitoo - a new PR and communications manager working for Midjiwan, the creator of The Battle of Polytopia.

Midjiwan has worked a lot on eliminating bugs since last year so I'm happy to say that we're launching a. multiplayer update in the middle of January 2018. It will surely work better for you now :)

You will find updates here:

Keep playing, all the best things will come your way!
/Midjitoo