When we last left Tetrobot in Swing Swing Submarine's indie hit Blocks That Matter, he was navigating levels, mastering elements, solving puzzles and saving a couple of indie game developers. Fifteen years later on in Tetrobot and Co., also available for iOS and Android in addition to PC, Mac, and Linux, we find him a bit run-down and several of his memory chips fragmented into pieces. A savvy young Technobot repair technician named Maya is ready to sort all this out and get our Tetrobot (among plenty of others) restored back to full working order again, and as always the answer is more 'bots! She wires together the circuitry for an even smaller model, Psychobot, and sends our intrepid miniscule hero into Tetrobot's hardware to clear out the obstruction and reassemble his memory chips. If you haven't played the original, the sequel features more inimitable puzzle-y goodness with elements some have likened to games as diverse as Tetris, Minecraft, Dig Dug and Boulder Dash with a fascinating style all its own. 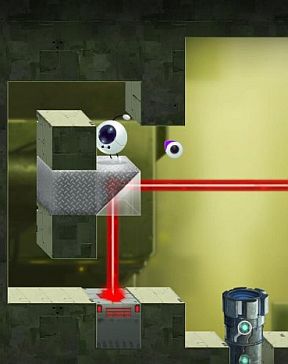 Designed for 'bot repair himself, Psychobot can emit a ranged beam ahead of or behind him (left or right of him, from our perspective) that absorbs blocks of matter. He can also shoot them out again in the same directions, and they'll keep going until either they stick to something like a similar material, or they hit something and fall. A simple enough gameplay dynamic for sure, but with plenty of different materials introduced throughout the game Tetrobot and Co. stays fresh and interesting the whole way through as you repair an assembly line of malfunctioning Tetrobots, each suffering from its own particular problem prompting a spate of imaginative level themes and gameplay opportunities. Client's Tetrobot sustain a bit of water damage? Encounter levels where the walls are made of water, and futuristic cannons shoot you through them from room to room. Deterioration in a Tetrobot's power supply? Enjoy levels full of blocks which crumble away satisfyingly with a click, arcing electro-barriers and metal blocks which charge up when lobbed through them, so useful for activating various devices. Client's child get pudding into the inner components of their Tetrobot? Bring on levels where the walls are made of pudding, pudding creatures shuffle back and forth activating switches, and tossing blocks at them results in a cute squeak and a block that's now very sticky on one side. 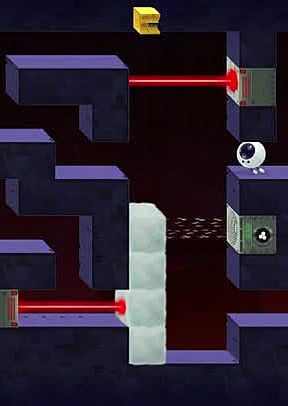 From sand blocks (sand... blocks?) that turn into glass when hit with a laser, to pipes that route you who-knows-where and sometimes need segments added to complete them first, to wooden blocks that respond to searing heat in the predictable way, Tetrobot adds plenty of materials and then brings on puzzles that make the most of them. While the puzzles range from, 'Alright, that was just fun to solve' to fiendishly difficult, you may be stumped on occasion but you'll never be stuck clueless and pleading, 'What do you want from me?' Each level centers around a new concept, and the first room of a level usually starts you off easily and gives you a sense of what new mechanic or block function you'll be working with. Whenever you encounter a new type of block you'll also add it to your in-game Faceblox account, reading interesting status updates and posts from it. As you complete levels you'll also fill in Maya's diary entries, learning more about the backstory with Maya, Alexey and Markus (who we met in Blocks That Matter). But it's not just about blocks and puzzles. Tetrobot and Co. shines with all manner of in-game niceties that make it a cozy and refreshing environment you'll love interacting with. The graphics are crisp and beautiful, the soundtrack is mellow (and optional), and everything you do is complemented by delightful sound effects and fluid animation sequences that perform smoothly even on older, mid-grade smartphones. A move-by-move Undo feature encourages risky puzzle-solving experimentation, since one wrong move won't dash your last five minutes of careful maneuvering. The ability to have three different save files enables you to show Tetrobot and Co. off to your friends, though this game makes the list of titles not to load on your phone and show to your boyfriend if interacting with either of them for the next few weeks is much of a priority for you.

Since Tetrobot and Co. came out for desktops a while back and was only released for tablets and smartphones just recently, the result is a full-featured and stable game with all the trimmings and plenty of presentation to spare. We did find that occasionally selecting a move accurately on a tiny smartphone display was a bit hit-or-miss, but everything still performs well and devices with larger displays are preferable. This is when you'll be particularly glad of that Undo feature! With plenty of civilized amenities to keep you engaged and comfortable, eight different Tetrobots to repair, some bonus areas, forty-three levels in all and not a single in-app purchase, Tetrobot and Co. is well-worth the modest nickle-and-dime pricetag. This is how great games should be done!